I wanted to reach out to one of our graduating Clinical Mental Health Counseling students, Ruthie, who just received an award at this year’s Diversity Banquet so that she could talk about her receipt of the award and some of the things she has been involved in on campus.  Ruthie is an absolute force when it comes to advocating for her populations and really being a lighthouse within her community.  She has been a leader on campus as well as off volunteering, presenting at conferences, bringing key speakers to campus, starting organizations, facilitating dialogues and many many other amazing things. Below you will find her blog entry about receiving the Dr. Evelyn Kirkley Award for Leadership and what it has meant to her to be a leader on campus. In true Ruthie fashion, her response to my request to feature her will show you the kind of leader she is and exhibit exactly why she was honored with this award, she writes:

My heart’s desire, as you write this article, is to model for other students the power we have to create movements of change. It is in the small justices we do for one another and for those we serve.  My intention for fellow students and the USD community is for them to live a life of changemaking. Instead of admonishing them to be the change, I provoke them to changemaking. From the smallest acts of kindness to macrosystemic change. This jouney has been tearful and hard at times, but my spirit is rich. Dr. Zachary Green once said, “Shed light without spreading fire.” I am a strange cookie, but I have a saying, “Fate sends the strangest people, upon the oddest situtaions, to do the neatest things.” If we shoot for the stars, we will at least hit the moon. May those I have served become greater agents of change then I could possibly dream.

For the last nine years, the United Front Multicultural Center hosts the Diversity Banquet. At the banquet, awards are given for exemplary works in diversity. Requests for nominations are sent to students involved with the United Front Multicultural Center around April. The nomination form reads, “The Awards were created in 2006 to honor USD faculty and staff who contribute to the development of a campus community that is culturally diverse and create an educational environment that motivates and supports student learning and personal development. The honorees have dedicated and prepared students to make a positive impact in global society.” It is an opportunity to honor graduating seniors and graduate students for their accomplishments. Although, I was nominated for all the CLASS Awards, I was awarded one award. The categories for the awards were as follows:

I was awarded the Dr. Evelyn Kirkley Award for Leadership. This award is for a student who led an organization as a member of an executive board and through leadership capacity led initiatives, which contributed to the development of leadership in others.  Below is a portion of one of the nomination letters submitted.
She is the founder and president of a graduate student organization called Asian Students in Action (ASIA). Through her leadership, ASIA has increased in numbers from a mere five students to almost forty members within the first semester of their existence. She established a community that focused on academic excellence and compassionate service. She served by creating opportunities and supporting events and programming for community. In addition, she is a Rainbow Educator and Safe Space Ally. A few of the events she either spear headed, coordinated, or assisted were:

In addition, she has done extensive research on multicultural and social justice with an emphasis on intersectionality issues. As such, she has presented at various conferences. Her work has also included various types of social justice volunteer work.

Ms. Inacay has the heart of a servant leader. She serves those she leads. In ASIA, she was mindful of each member and has developed the mission statement and constitution to support forward growth. She is passionate about social justice and LGBTQQIA issues. She currently is a counseling intern at Southern California American Indian Resource Center. There she counsels an underserved population and dedicates a significant amount of time, beyond the requirement, to help her clients. She is a hopeful individual. She demonstrates this in her positive attitude in working with those suffering from addictions, trauma, and mental health disorders.
Ruthie demonstrates a spirit of diversity, leadership, and service toward others. Her values show academic excellence and compassionate service. She is a role model for students and me in sustainable campus work, leadership, academics, social justice, and service. 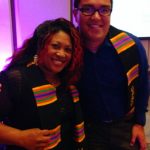 With ASIA co-founder and classmate Harry 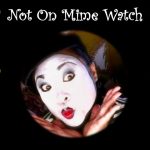 Not On Mime Watch: A Suicide Intervention / Prevention Film http://www.youtube.com/watch?v=otTi9xRM2xE 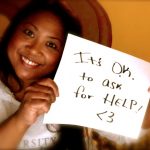 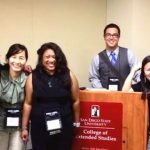 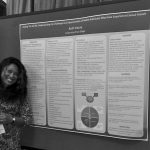 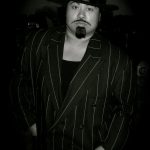