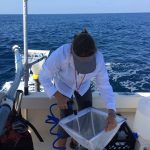 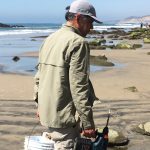 Jesús Pineda in the rocky intertidal. 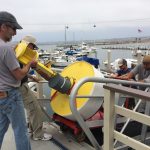 Understanding how larvae are transported in the coastal ocean is key for characterizing the population fluctuations of marine organisms. Studies demonstrate that larvae of species that inhabit shallow waters can behaviorally respond to changing oceanographic conditions by moving vertically into currents that can promote their transport to coastal, nearshore habitats where they settle to bottom habitats and complete their life cycle. However, the oceanographic mechanisms that promote such transport, and how they might be impacted by infrequent events such as El Niño, are poorly resolved. Given that El Niño events might increase in frequency and magnitude under climate change, it is imperative to assess how El Niño affects larval transport and larval settlement. To this end, this study will use an unprecedented set of nearshore biological and physical measurements spanning pre-El-Niño, during El Niño, and the predicted return to El Niño neutral conditions, to test mechanistically how larval transport and settlement respond in a nearshore coastal environment. This project will also provide educational and research opportunities for students at the University of San Diego, a liberal arts university. At least one laboratory exercise demonstrating the impacts of El Niño on larval transport and settlement will be developed for undergraduate students, and students will be recruited to participate in all aspects of the project to provide them with hands-on research experience. This research will form the basis for the thesis work of at least one M.S. graduate student. Finally, given that the research falls within a Marine Protected Area, results will be broadly disseminated and shared with coastal managers and the CA Department of Fish and Wildlife.

Larval transport and settlement are fundamental processes for understanding the population dynamics of benthic invertebrates. Previous studies and unpublished observations indicate that El Niño events profoundly impact community and population processes, and in Southern California, El Niño effects range from alteration of larval transport and settlement of local populations, to the geographic expansion of subtropical species. This research will test the hypothesis that the current (2015-2016) El Niño event will result in a reduction of barnacle larval transport and settlement in Southern California nearshore habitats. Two mechanisms might be involved; first, a deepening of the thermocline forced by El Niño would result in reduction of larval transport by internal tidal bores, a mechanism that requires shallowing of the thermocline. Second, the distribution of larvae of littoral barnacles would be deeper, more offshore, and less constrained to nearshore habitats during El Niño than in El Niño neutral conditions, resulting in a reduction of nearshore larval abundance and settlement. The effects of El Niño on nearshore circulation, hydrography, larval transport and settlement in Bird Rock, Southern California, will be measured by a) deploying an array of instrumentation to measure temperature, pressure (waves) and currents; b) measuring daily barnacle larval settlement, and; c) assessing cross-shore and depth distribution of invertebrate larvae. These observations will be contrasted with two years of comparable observations taken at Bird Rock in 2014 (El Niño neutral conditions) and 2015 (during El Niño). Additionally, the investigators will measure weekly settlement at Bird Rock, and at Dike Rock, a site 7 km to the north, where previous observations at the end of the 1997/1998 El Niño indicated that barnacle settlement was very high. This will enable the evaluation of the generality of the settlement response as El Niño conditions eclipse, and examination of how settlement varies along a coastline.

This study addresses near shore cross-shore larval transport processes that operate over wide geographic areas in open coast settings, namely larval transport by wave circulation / Stokes drift, and by internal tidal bores. Larval transport by wave circulation / Stokes drift is a ubiquitous process that has not been studied observationally, and it is not known how internal tidal bores deliver larvae to intertidal habitats. This project will examine near shore (region between 20 m depth and intertidal) physical and biological processes that account for the delivery of larvae to adult habitats. The study system in Southern California shares similarities with most other temperate areas and we will study marine taxa that are widely distributed and successful in a variety of environments.

Intellectual Merit: Recent studies suggest that larval transport in the near shore zone plays a central role in larval dispersal and connectivity of shallow water species. These recent advances, however, have not been matched with process-oriented studies addressing circulation and behavioral processes at the appropriate temporal and spatial scales, and only a few larval transport mechanisms have been considered for near shore open coastlines. Recent advances in our understanding of hydrodynamic processes driving cross-shore flows and growing awareness of the importance of the processes to larval transport, however, make this study timely. The investigators hypothesize that a series of physical and biological events results in the delivery of invertebrate larvae to the intertidal habitat. These events include physical transport due to wave circulation / Stokes drift near the surface and internal tide circulation near the bottom, alteration of behavior for terminal larval stages, and larval use of “adaptive” behavioral responses to exploit event-dependent flows. Further, they suggest that the predominance of wave circulation / Stokes drift and internal tide circulation varies seasonally, with internal tidal bores important in spring/summer, when the water column is well-stratified, and wave circulation / Stokes drift more pervasive in fall/winter, coinciding with winter storms. The hypotheses in this study will be tested with estimates of physical transport, larval supply and settlement. These measurements will be combined with use of adaptive sampling to test the dependence of larval vertical distribution on changes in hydrodynamic conditions.

Broader Impacts: Results from this study will have important ecological implications as wave circulation / Stokes drift and internal motions may represent critical and regular transport mechanisms for larvae of marine organisms that must return to near shore habitats to complete their life cycle, thereby impacting population connectivity and management strategies used by coastal planners (e.g., ecosystem-based fisheries management, placement of Marine Protected Areas). The investigators will disseminate their results to the public through lectures and the development of a website. Furthermore, this project has a strong educational component, involving undergraduate and/or graduate students from two institutions (WHOI and University of San Diego). The research will be integrated into courses taught by all co-PIs at their respective institutions, but an integral component of this research is to enhance student experiential learning with cutting-edge research experiences at USD (a liberal-arts university). Sampling as part of this project will be incorporated into a field-based Marine Community Ecology course for upper-division undergraduates and students will be required to participate in at least one research cruise. The investigators also plan to offer competitive undergraduate student stipends for summer research at USD. To disseminate results, participants will be required to participate in the annual Undergraduate Research Conference, highlighting student-faculty interactions held at USD.