It is interesting and almost shocking that smoking is the leading cause of death for preventable diseases. About 1 in 5 deaths are a result of smoking. In an experiment conducted by our Environmental Chemistry class, the emission smoke from cigars was compared to that of cigarettes and some interesting results were found! These results were also compared to the emissions that cars produced, but overall the cigars and cigarettes were found to be quite worse. While other groups tested the smoke from cigarettes, my group was the only one testing the emissions from cigars. 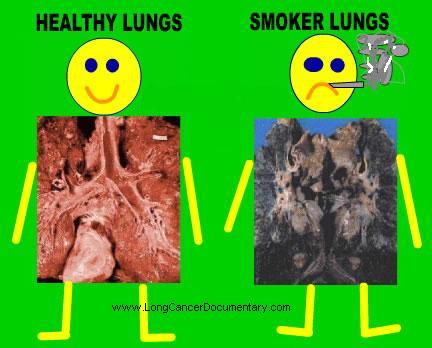 Some of the data leading to the conclusions of this experiment included the weight of the filter papers used before and after. In one trial the filter gained an entire 0.0142 grams, and therefore the amount of particulates was 0.0142 grams/L. As we have noted from this experiment and through class discussions, fine particulates such as those found in smoke and car emissions, are so dangerous for an individual’s health. The particulates don’t just sit at the top of the nasal ways, but they work their way into the respiratory system and cause serious health problems. For comparison, the weight of the filter paper after cigarettes was tested was 0.016 grams, 0.0101 grams, and 0.0046 grams, to name a few. Also the NOx concentration in cigars was much higher in cigars and cigarettes than in vehicles, which is another fact to further support this smoking epidemic. A high concentration of NOx results in a larger inflammation of the lungs. If the above image doesn’t convince you enough, then I am not sure what would!

After having multiple smokers in my family and deaths as a result, this topic has been very important to me. I think it’s so easy to get caught up in college culture these days and the notion of following what everyone else does, that sometimes it’s hard to remind ourselves how damaging something like one cigar or one cigarette can be. We want to fit in and be cool, and not look bad by simply saying no. So many of my friends, my parents, and even myself have been offered a cigarette at least once in our day. Before doing this study, I frequently told myself that smoking is bad just because I was informed so or because I would google graphic lung images to see for myself. But, now I have the science to back up my claim which is pretty cool! Who knew that a simple experiment could inform a classroom of young adults so much, and hopefully the public.

One thought on “The Smoking Epidemic”