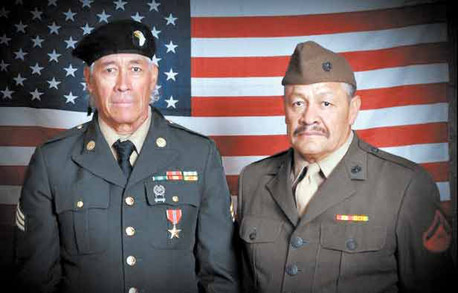 Brothers Carlos and Valente Valenzuela are both veterans of the Vietnam War. They were born in the municipality of Ojinaga in the northern Mexican state of Chihuahua, but when they were three years old their mother—a U.S. resident—brought them to live in Colorado.

As young men, they chose a career in the military and joined the army. Between 1968 and 1972 they served in Vietnam. Forty years later, they faced deportation procedures begun by the country they had risked their lives to defend.

The Valenzuela brothers are traveling the United States searching for legal support. Multiple civil rights organizations and veterans’ groups have joined their struggle, representing hope for both the hundreds of veterans facing similar proceedings and the many other veterans who have already been deported.

On their chests, they wear the medals they received for bravery, among them the bronze star that the Army awards to those soldiers who have saved the life of another in combat. One of the philosophies of the military is not to leave anyone behind.

“This star means that I served and defended myself. I killed the enemy and, thanks to God, I am still alive, even though I was shot,” says Valente, who is currently facing deportation due to domestic violence. Deported to Mexico
Víctor Manuel Partida, a former National Guardsman in the U.S. and a combat veteran, was deported to Mexico on December 21, 2011. He was processed for having stolen material from a construction supply store worth slightly more than 400 dollars.

“The judge told me that they would deport me. I asked how could they deport me if I had served this country… But he told me it did not matter. They thanked me for my service and deported me.”

Víctor lives in a small room in the municipality of Rosarito in Baja California. He has managed to survive thanks to the charity he receives from Héctor Barajas, a U.S. combat veteran who was also deported and who provides his lodging.

Both men want to return to the United States, comments Héctor, who wears a red beret that indicates his rank and identifies him as a paratrooper. He was deported for discharging a firearm in public, even though he had legal residence—one of the requirements for joining the military.

By Héctor’s count, in Rosarito there are at least twelve deportees who served in the U.S. military, nevertheless, he notes that he is aware of another 64 cases of veterans who were deported to countries like Germany, Costa Rica, Peru, Canada, Trinidad and Tobago, Belize, Ghana, Bosnia, and Jamaica.

Deported Veterans are Residents, not Citizens
Guadalupe Valencia, a lawyer in San Diego, explains that there are different criteria for deporting a person who has committed a crime, as well as different classifications even when an individual is a legal resident and has served in the military. Nevertheless, he explains that if it is demonstrated that an individual has children or other economic dependents, the authorities cannot deport them.

“It is impossible to deport someone who is a citizen,” the lawyer remarks, observing that the problem in the case of deported combat veterans is that they did not apply for citizenship and instead had only a residency card.

“If they are legal permanent residents it is possible for them to be deported, since the only thing the U.S. government cannot do is deport citizens,” says Rafael Alarcón, a researcher and professor at the Social Studies department at the Colegio de la Frontera Norte (COLEF).

The Government’s Betrayal
The reforms to immigration law that allowed for the deportation of legal permanent residents came in 1996, under the administration of Bill Clinton. But after the terrorist attacks of 9/11, the passage of the Patriot Act intensified the deportations under the guise of combating terrorism.

That meant that many residents faced deportation proceedings for crimes that would not have previously resulted in deportation, as in the case of the Valenzuela brothers, Víctor Manuel, and Héctor, the four combat veterans.

“It represents a lack of loyalty on the part of the U.S. government, a betrayal of the soldiers who risked their lives,” remarks Alarcón, who is among those who believes that even if the deportations are legal, the only thing they demonstrate is a lack of discretion and sensitivity toward combat veterans.

They fought for a country that is not their birthplace. Nevertheless, they do not want to leave the United States. They have their loved ones and their families in that country and because of a personal mistake they are entered into deportation proceedings or have been deported. Life is sometimes unfair, the four men agree, but despite the situation they still retain their patriotism and wear their uniforms as heroes, defenders, and patriots of a country that has turned its back on them.

This article was originally published by Animal Politico under the title “Veteranos de Vietnam son deportados a México” and is available at: http://www.animalpolitico.com/2012/03/veteranos-de-vietnam-son-deportados-a-mexico/ It was selected for translation by Brooke Binkowski, guest editor of TBI’s Freedom of Expression Blog for the week of 11/7-11/11.