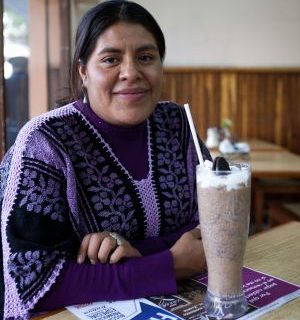 “In Mexico, if you are indigenous, a woman, and poor, you are screwed.”

Eufrosina Cruz Mendoza does not hold her father responsible for marrying his sister when she was 12. “He learned, with me, that I, a woman, was worth the same as my male brother,” says the congresswoman as she drinks a hot chocolate at the Café La Habana in Mexico City. Born in a small town in the hills of Oaxaca, where the laws are not those of the state but those of the town’s indigenous traditions (a legal system known as “usos y costumbres”), in 2008 Cruz demanded both her right to vote and to be elected municipal president (the equivalent of mayor) but both petitions were rejected “because she was a woman.” Thus began the political struggle of the woman who would become the leader of the Oaxacan state congress—the first indigenous woman—and who today serves as a federal congresswoman in Mexico’s Chamber of Deputies. “I didn’t want to repeat the story of my mother, to get married and have children while still a girl.”

Eufrosina is the protagonist of the documentary “Las sufragistas” a film by Ana Cruz that uses her story to tell of the struggle of Mexican women to win the vote. She recognizes that under the pretext of these “laws of self-rule” many women experience a violation of their human rights. “In 482 municipalities of Oaxaca, the system of usos y costumbres is still in force, and in nearly 100 of them women do not have the right to participate in the democratic process. But we c an change that. Usos y costumbres are about language, clothing… not the violation of progress.”

Nominated by the National Action Party (PAN), which ruled Mexico from 2000 to 2012, the congresswoman acknowledges that she maintains her freedom of conscience within the party. “Before I was with them, I knocked on a lot of doors, but few parties opened the space for your voice to be heard.” She is grateful for the opportunity that Calderón gave her, but reiterates that entering politics forced her to make sacrifices. “As a citizen, it is easier to question things, but change takes longer. When you are inside the system you become part of it, and you have to withstand the criticism. Oftentimes you are not in agreement with what is being voted on, and you are frustrated, but if you were not there you could do even less for the rights of those who are vulnerable.”

During our interview, Cruz Mendoza frequently touched her belly. “There are 10 days left before the due date” and the congressional sessions, meetings, and interviews are tiring, she says with a smile. “But being pregnant is not a sickness,” she observes. When she is asked what she hopes Mexico will be for her child, she does not hesitate: “a country in which everyone is included, without distinctions, with equality of opportunities. Perhaps I won’t live to see everything I dream of, but I am here to create an opening for those who come after me, not because I have ambitions for my own career.”

Despite having suffered two attacks and despite leading a life that contradicts the society she was born into, she has never considered herself a victim. She feels that the discrimination she faces is more about her indigenous ethnicity than her gender. “At any rate, it is said that if you are indigenous, female, and poor, you’re screwed.” She argues for more spaces for indigenous communities in congress: “there are five indigenous representatives out of 500, and in reality we represent almost 16% of the Mexican population.” When the interview concludes, her hot chocolate is almost completely untouched. She asks for it to go, since it is time for her to rest. It is 7 PM and she has been working 11 hours.

Paula Chouza writes for El Pais. This story was originally published under the title “Aperitivo con Eufrosina Cruz” and is available at: http://sociedad.elpais.com/sociedad/2013/03/13/actualidad/1363196831_378581.html