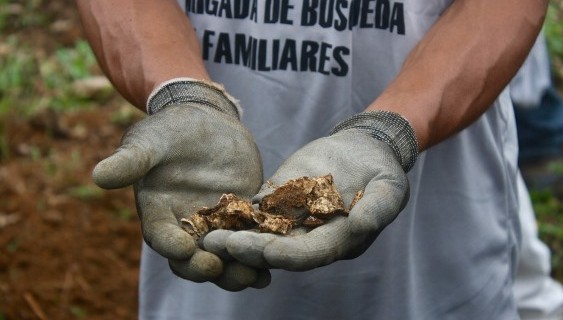 ~ This article was originally published by Blog Expediente on April 12, 2016 ~ AMATLÁN, VERACRUZ.- Death breathes through every pore in the black earth of La Pochota. This is the first site to be visited by the First National Search Brigade for the Disappeared. The brigade is comprised of more than 10 specialists from various states in the country’s north who have arrived here to look for clues that will help find those who are missing, be they the victims of individuals, organized crime, or enforced disappearance by the state.

The specialists from Guerrero, Sinaloa, and Michoacán, walk carefully through the sugar cane fields that grow on the flanks of the San Miguelito sugar mill. They know that they must search every space without damaging the stalks of grass.

They have scarcely entered the field and are still near the road, when they find clothing. “It is in good condition, it doesn’t look old, that is very odd,” says Julio Sánchez Pasilla, from the Grupo Vida, in Coahuila-Los Cascabeles.

After traveling a bit farther, more clothing appears—dozens, more than 20, perhaps 30, changes of clothing from different young people. The specialists analyze it, take pictures, mark the coordinates, and follow the path that recalls the stories of death that have happened in this corner of Amatlán de los Reyes. Here is where, in April of 2012, officials pulled the remains of Liliana Aguilar Sánchez from a well.

She was the victim of a feminicide, and had been raped. She was the wife of an engineer at the San Miguelito mill. The day she was killed, she had left work, and was driving a Volkswagon Bug on her way home, alone, when she was intercepted by two men who ended her life. They also stole her car.

The murderers were Filiberto Hernández Pérez and Roberto Pérez Sánchez, from the town of La Pochota, where they are currently serving a sentence of 51 years for the crime, and for five more feminicides they committed between 2012 and 2014. In each case, they raped, then beat their victims to death, and dumped them in this field.

But those are not the only ones. There is also the famous gang called Los Coralillos, formed of men and women, who during the administration of Miguel Alemán Velasco sowed terror here. Three members of the gang have been arrested, accused of having killed at least 12 people—mostly women—who were assaulted and dumped in wells on the same plot currently being searched by the brigade. “This is like a demonstration; we are going to show how we search in very difficult conditions, how we are doing what the authorities are not,” says Julio Sánchez. He speaks with a voice of authority to the nearly 40 people attending the first gathering—nearly all of them mothers who, for the past two or three years, have been missing their children. The last time those children were seen, they were with friends, heading to parties, to bars, being arrested by police, taken by force with 12 others, and so on… that is the common pattern of disappearances in the region, according to the stories the attendees tell.

La Pochota’s curriculum of violence has another entry: the legend that accompanies the giant cross that is nailed to the trunk of a giant ceiba or Pochote tree there, from which the nearby town and the field take their names. The legend says that, many years ago during the Revolution, the tree’s leafy branches arching high overhead, were used to hang outlaws and enemies, whose bodies were then left there, dangling, as a warning.

From the tree, you can see a plot surrounded by sugar cane, bordering on La Pochota, a place that, at the beginning of 2006, became the scene of a massacre allegedly carried out by a gangster identified as “Diego Rosario,” a black legend for in the police world. There were seven victims, all shot in the head, half-naked, beaten, and with a religious medallion hanging around their necks. It was said that it was the signature of Diego Rosario, the name that appeared in the many narco-messages that were directed toward criminals during the worst years of the administration of governor Fidel Herrera Beltrán. Some of the seven had been taken from a home located in the Reforma sub-development, a property of [activist] Maruchi Bravo Pagola, and taken to the fields of La Pochota to be executed.

On many walls and fences in this sugar cane town, you see photos of the missing, along with telephone numbers. There are crosses along the roads, and you do not know if they are from traffic accidents or executions. Before this search, in the cane breaks, criminals dumped two decapitated bodies—one on Saturday, and the other on Monday morning. “But we have not come to look for the bad guys, not even those who are killing families, we have come to look for our family members,” adds Mario Vergara, from the Other Disappeared of Iguala, who quickly instructs the volunteers to enter a well in the middle of the sugar cane field. It is the same well where the body of Liliana Aguilar Sánchez was recovered. One of the specialists descends to the bottom and notes a foul odor from the water. That is all. The results of the first day of searching are just hints. “Looking for bodies in the fields is a slow process, a lot of work, you have to go out, return, and go out again, always patiently. What we are looking for takes a lot of patience to find. Although it might only be a fragment of bone, a single fingernail-sized bit of bone that we find can give peace to a family,” Vergara concludes.

Ignacio Carvajal writes for Blog Expediente in Veracruz. This article was originally published with the title “Ronda la muerte en Veracruz” and is available at: http://www.blog.expediente.mx/nota/19001/periodico-de-veracruz-portal-de-noticias-veracruz/ronda-la-muerte-en-veracruz-