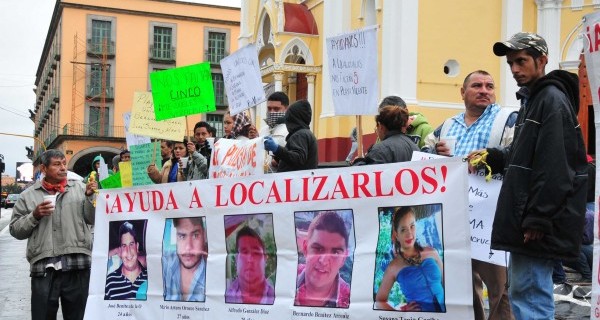 ~ This article was originally published by BlogExpediente on February 3, 2016 ~ Thursday, February 19, 2015. They passed by at midnight. The hooded gunmen, armed to the teeth, turned their pickups on to Highway 145 in search of victims. The marauders left a fortified house near a town known as El Fraile. The community is located on Highway 145. A route of death and the refuge of gangsters who, sent from the port of Veracruz, arrived there to begin operations for the Jalisco Nueva Generación Cartel (CJNG).

Earlier that evening, bus number 0147 operated by ADO, left the port city of Veracruz headed for Oaxaca. The bus was observed in La Tinaja when it passed by a State Police (SSP) checkpoint. On board were more than 20 passengers. At 1:30 AM, it would pick up more in Tierra Blanca, then continue on Highway 145 to Oaxaca.

Between Mata Alta and El Amate—Tierra Blanca—the driver of the bus encountered trees across the road. They had been thrown there by members of the gang. Thirsty for blood and lust. Hunters of men and women. The driver slammed on the brakes. At least half a dozen rifles pointed at him. He was forced to open the doors of the Mercedes Benz bus. Two gunmen clattered aboard and ordered him to turn back toward El Fraile.

They turned on to a side road. More than a dozen hearts beating a thousand times an hour. The passengers grew terrified. Some began to pray, and others begged for the lives of the children. That was the story they would tell hours later in the offices of the Tierra Blanca public prosecutor, offices that are currently occupied by the parents of the five young people from Playa Vicente who disappeared in Tierra Blanca in January. That was what they would tell the prosecutor, the same prosecutor who has yet to give any good news regarding the five who were presumably taken by the Jalisco Nueva Generación Cartel. There, they revisited the fear, the shame, and the impotence of that evil night when several women were raped aboard the bus in El Fraile.

Once they reached the darkness, the gunmen robbed, humiliated, insulted, and crushed the human dignity of the passengers of bus 0147. The assault lasted several hours. Before the vehicle had been diverted from its route, some of the passengers had called the municipal and state police. Nobody ever responded. The calls were sent to voicemail every time. Redialing did not work. Even the emergency number. Repeatedly, calls to the municipal police and Tierra Blanca state police offices were answered by a machine.

Who was the chief at the time? In those days, it was not known. Now it is: Marcos Conde, the SSP delegate in Tierra Blanca, who has just been imprisoned for his complicity in the forced disappearance of those five young people who had been returning from a festive trip to Veracruz. Their only error, their bad luck, was to be traveling in a car that might have been considered a luxury model. Because they were young, because there were more than five of them in the vehicle, they seemed to pose a grave threat to criminal interests.

The telephones of those passengers aboard the ADO bus could not reach the police the night of February 19, 2015, one of the worst nights in the history of Highway 145. At the time, the complicity of the police with the gang seemed apparent. Now it is known. It is also now known that those details are part of a complaint filed with the federal Attorney General’s office (PGR). Because morning, noon, and night, in towns across the region, on roads connecting Tierra Blanca with the rice paddies of Tlalixcoyan, in the middle of Mixtequilla, and in the sugarcane fields of Cuitlahuac and Omealca, those bands of gunmen were seen being guarded by state police patrols.

The same thing occurred in Cardel, the municipal seat of La Antigua, from the end of 2012 until 2014. Then, at least 30 young men were disappeared by gangsters in police uniforms that hunted humans. And as a result, the mothers of the collective Solecito Veracruzano demanded the head of [State Security Minister] Arturo Bermúdez and a political trial of Governor Javier Duarte de Ochoa. Everything was clear. The head of the state police and the governor could not have been unaware of the extermination campaigns in Cardel, Úrsulo Galván, Paso de Ovejas, and Puente Nacional.

The same. Identical. Nothing changed in Tierra Blanca, and that terrible night confirmed it. In the complaint filed with the public prosecutor, the report included the accusation that various women were groped and assaulted by those hooded demons with AK-47s. Sex by force. It did not matter that there were children present. Those were the worst hours for those citizens of Veracruz and Oaxaca in that lost corner of El Fraile. In the middle of the night. At the same place where the PGR found, last week, a laboratory with thousands of liters of petrochemical products and metal drums that led them to the El Limón ranch in Tlalixcoyan, where they found evidence of the missing five from Playa Vicente. There, in Tierra Blanca, while gunmen roamed openly, life ended at six in the evening. At night, nobody went out. To be a man, and go out, was to risk your life; to be a woman, you risked your safety.

The episode of rape and assault aboard the ADO bus has been forgotten by state authorities, who are now facing scrutiny over their incompetence in the case of the Playa Vicente five. But the highways of southern Veracruz have long been routes of death. Lawless territories where highway robbers take blood and souls with knives or phalluses.

Regarding the situation, the Executive Ministry of the National Public Security System (SESNSP) reports that over the last five years, there have been 939 reports of highway assaults in Veracruz, and of those 641 have been attacks on passenger buses or private cars—75 percent of the cases. The Tierra Blanca episode becomes another statistic.

What is known about that night of horror is that it continued several hours later at a ranch near El Fraile, also along Highway 145. That is according to a report filed with the PGR by a person from Tierra Blanca, who is now in exile after facing pressure from authorities aligned with the criminals. The marauders arrived at the ranch, where there were only elderly and children, and began the looting. Sexual hungers aroused by the power of the gun, they did not find an appetizing target and grew more violent. According to the PGR documents, they dragged an older woman across the patio by her hair while the other gunmen, like evil spirits, watched from the comfort of their trucks. Alert, their weapons cocked. They stole valuables, money, telephones, and papers from the ranch. They took their time. Leisurely. Along the highway, witnesses later reported, they saw state police vehicles pass by, guarding the criminals’ flanks. As they departed, they left behind a threat against anyone considering reporting the events.

“When I tried to file the complaint, they didn’t want to take it,” says one of the victims, who asked to remain anonymous. “I had to get a lawyer to help me, and ask the PGR to accept it. When I tried to file it, someone from the local prosecutor’s office tried to scare me off. They knew who I was, they said, and what I was doing… I wasn’t afraid, though, and I filed it anyway,” she relates. “A lot of families in Tierra Blanca were affected by that group of bad men who were guarded by the police, but they’re remaining silent out of fear.” Fear that had to be overcome by the parents of the five missing children from Playa Vicente.

Laura Rojas is a correspondent for BlogExpediente, currently on special assignment in Tierra Blanca. This article was originally published under the title “Noche endemoniada en Tierra Blanca” and is available at: http://www.blog.expediente.mx/nota/17883/portales-de-noticias-de-veracruz/noche-endemoniada-en-tierra-blanca