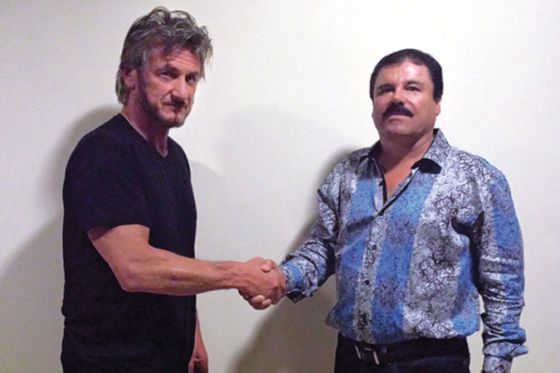 Sean Penn’s interview is cynical, not only because it is propaganda, but because it ignores the history of how El Chapo has treated the press

“If the Devil offers me an interview, I will travel to hell.” The declaration became famous in the Mexican press when the legendary journalist Julio Scherer García used it to explain his interview with Ismael ‘El Mayo’ Zambada, one of the leaders of the Sinaloa Cartel.

Scherer did not have to go so far to find El Mayo, one of the most evasive drug lords in Mexico. In the spring of 2010 he traveled to an undisclosed location, probably in the state of Sinaloa or Durango. Five years later, the actor Sean Penn would travel a similar route to the same mountainous zone of the Sierra Madre Occidental [Cosalá, it has been revealed] to meet and interview El Mayo’s most famous partner, Joaquín ‘El Chapo’ Guzmán.

The interview published in Rolling Stone a day after the capture of El Chapo caused a furor in Mexico. That a North American actor, along with Mexican movie star Kate del Castillo, could reach the fugitive Guzmán was humiliating for the Mexican government. But the interview is also painful for Mexican journalism.

The text of the article, despite its editorial flaws (such as giving El Chapo a say in the story’s content and the superficiality of its questions) is an important document in the history of the narco war. Although it says more about Penn than about El Chapo and although one must endure 20 paragraphs of an irrelevant and egoistic personal diary to reach the meeting in the mountains, we have a few glimpses of how the drug lord thinks (when he recognizes that drug trafficking will continue unchanged after his death) or how he tries to deceive the Mexican public (saying that he would resort to violence only to defend himself, but did not start problems). Coming from a man linked, directly or indirectly, to the murder of thousands of people in the last decade in Mexico, the interview is revealing.

But it is also cynical, not just as propaganda, but because it ignores the history of how El Chapo and his organization have treated the press.

Sean Penn insists in narrating the danger he faced in traveling through the rugged terrain of the Sierra Madre, the risks to his life or even to his most intimate body parts. Surely he has never met anyone who really covers the war on drugs in the area.

Last fall, while Marine commandos searched for El Chapo in the mountains (and after Penn met with him) Mexican journalists reported from the towns where the operation was occurring. The harsh geography and difficult transportation were not the problem they faced so much as the presence of armed men who formed the ring of protection around Guzmán. The risk of bumping into the wrong people was enormous, but despite this journalists traveled to the zone and got their stories despite the personal risk.

Did Sean Penn face the same danger? Of course not. He could travel on the same roads, but protected by the very people who made it dangerous for any other journalist to approach El Chapo’s hideouts. Penn was shepherded by the same people who did not want other reporters poking around.

And his fear of being the target of a government strike was unfounded as well, since it was revealed that the Marine commandos ceased operations owing to the actors’ presence in the zone. A privilege that no other reporter in Mexico has enjoyed.

Once at his hiding spot, Guzmán offered Penn a meal of carne asada, tacos, and tequila. Perhaps the actor did not know that similar events occur with regularity in Mexican cities when criminal bosses want to meet with reporters. But those gatherings are not optional, and journalists have no choice about attending. In those meetings there is often a buffet similar to the one Penn and El Chapo shared, but there is also something more than food: a very specific threat about what journalists may publish; a precise list of what reporters and editors who cover local crime can and cannot do; a crystalline mention of the price to be paid if there is disobedience. Obviously El Chapo could not subject a Hollywood star to the same treatment, but that does not mean that it is not a regular characteristic of how drug cartels deal with the press.

In the last decade, at least 17 journalists have been killed or disappeared in Sinaloa, Durango, Chihuahua, and Sonora alone (the states where El Chapo would have had hideouts since his first escape from jail in 2001), according to the map Periodistas en Riesgo developed by the International Center for Journalists and Freedom House. Many other journalists who cover crime and narcotrafficking have been kidnapped, beaten, or threatened. It is impossible to know how many cases should be attributed to the Sinaloa Cartel or its rivals, but the majority are the product, direct or indirect, of the wave of violence and impunity unleashed by criminal bosses, including El Chapo Guzmán.

I have seen some of these cases close up. In the summer of 2010 members of the Sinaloa Cartel kidnapped three journalists who covered a riot in the prison in Gómez Palacio, Durango, a place where drug trafficking is controlled by El Chapo’s organization. A year later, unidentified individuals set fire to a car outside the front door of El Siglo de Torreón, the newspaper where I was an editor at the time. The attack occurred a day after the arrest of an important Sinaloa Cartel operator in the region.

Did Chapo order the attacks? Probably not. And neither is it likely that he would have ordered his deputies in Durango, Culiacán, or Chihuahua to threaten a particular reporter or editor. But since he occupies the highest rank in the organization, the responsibility is his, and he is well aware of the “benefits” of journalistic self-censorship.

From Sean Penn and Rolling Stone, Guzmán obtained the same self-censorship that he and his subordinates (or his rivals and their subordinates) regularly impose on Mexican journalists. The difference is that Penn and Rolling Stone offered it after an agreeable meal in the Sierra Madre and a series of friendly messages, while Mexican journalists must face the barrel of a gun.

There is a tone of false heroism in Penn’s narrative. If he really wanted to understand the danger of covering the cartels, he could take a job with a newspaper in Sinaloa or Durango and cover daily stories of crime alongside dozens of brave reporters and editors. Then he would know that an article could provoke the fury of any criminal boss and that he could become one more statistic on the long list of journalists who have become victims in Mexico.

Javier Garza Ramos is a journalist in Torreón, Coahuila, and a collaborator with press freedom projects with the International Center for Journalists and the World Association of Newspapers. This essay was originally published with the title “El ‘peligro’ de entrevistar al Chapo” and is available at http://internacional.elpais.com/internacional/2016/01/12/mexico/1452612563_879167.html