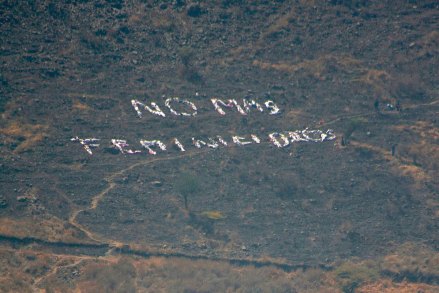 ~This report was originally published by Proceso on January 5, 2016 ~ Ecatepec, Mexico State – Almost every day Alejandrina Figueroa’s vocal chords ripped themselves apart, as though she was singing a ballad of death. The notes stuck in the ears of her neighbors on Huaxín street in the municipality of Chimalhuacán, but no one lifted their phones to call the police nor came to her aid. Surrounded by the community’s complicit silence, her husband, Guillermo Guzmán, 25 years old, sunk his fists into the young woman’s body. Over and over, high on drugs, in front of their two children who shared the room.

Straight-haired, full-lipped, and dark skinned, Alejandrina ceased her cries for help on August 29, 2015. She stopped going to her work, at a bakery located in the same neighborhood; it was the family’s only source of income. Days later, when the authorities entered the apartment, they found her laying between the bed and a cement wall. Stiff. Life drained away. Stabbed in the heart, stomach, and lungs. Guillermo had long since fled.

These are stories that do not have a conclusion. A relief. They flow into torrents. The new year in Mexico State did not begin with hope, but with the discovery of two female bodies in the canals of Toluca and Cuautitlán Izcalli on January 2. With that, the number of women murdered since a Gender Violence Alert (AVG) was issued [on July 28, 2015] rose to 39, according to the records of APRO (The Proceso news agency). That figure matches the tallies of the Red de Denuncia Feminicidios en el Edomex (Network of Reports of Femicides in Mexico State) and the activist Irinea Buendía.

Streets, dirt roads, drainage canals, empty lots, fields, highways, homes, footbridges… it does not matter, any place can be a tomb for the women of Mexico State. Despite the fact that five months ago a Gender Alert was issued in 11 municipalities, the spiral of femicides has not abated and the administration of Eruviel Ávila Villegas has not taken “conclusive” steps to disseminate and promote awareness of the problem in troubled areas, according to activists consulted for this report.

According to the directive 00124/SEGEGOB/IP/2015 from the state government, obtained through a freedom of information request, more than seven million pesos were spent on gender violence awareness promotional material from July to December.

Nevertheless, in the list justifying the budget, there is not a single campaign or document that explains what, where, when, and how the expenses served the alert. The name of the alert is not even included. As if that was not enough, several of the listed items, such as telephone lines, should be disseminated by the Mexico State government independently of the measures required by the General Law of Women’s Access to a Life Free of Violence.

“The Alert has no force. It is not visualized. Society does not even know what it is. People are not on alert. There is still inaction on the part of the authorities,” explains Manuel Amador, head of the Network of Reports of Femicides in Mexico State.

“This is an alert! Aleeeeeeeeeert! The name says it. Do you remember H1N1 (swine flu)? That is how it should be disseminated,” specifies David Mancera, president of the organization Solidarity for Families, who insists that the governor of the state is profiting from the measure in support of his possible precampaign for the presidency in 2018.

Useless Expenditures
Amid the dingy streets of the Hank González neighborhood of Ecatepec, another of the many tombs of women, is the preparatory school #128. In its small classrooms where storms of dust blow, Amador holds classes. He teaches human rights for the Facultad Latinoamericana de Ciencias Sociales (Flacso).

One of his courses on misogynistic violence is dedicated to his female students, and has the intent of “empowering them.” That initiative led to performances denouncing gender-based crimes. They dressed in black plastic bags and wrapped themselves with rope.

“There is no alarm, people keep searching for justice with their own hands,” says Manuel. He has a goatee, checked shirt, and a straw hat, and has been working for more than a decade in the municipality where Ávila Villegas was born and raised. For him, the root of the problem is structural: inequality, corruption, and the permissiveness of the governors.

From the top of San Pedro Mirador hill in Ecatepec, Manuel observes the houses painted with the colors of the ruling PRI party. “This is a void of the state.” There is no billboard or flyer that references the Alert. He walks through fields where there are at least five crosses marking where bodies were found. It is one of the places where investigative police check when a woman goes missing, one of the so-called “dumps of women.”

When asked directly, a rider on a state-run bus says: “I don’t know what it is.” Her voice, like that of other Mexico State residents, conveys total unawareness.

According to the state government, it has spent a total of 7,545,448.96 pesos on pens, flyers, directories, leaflets, pamphlets, folders, bracelets, magnets, posters, bookmarks, bags, shirts, vests, binders, and stickers. None are of the Gender Violence Alert. In the freedom of information request, the number of each is not specified.

In one of the documents there is reference to a “Campaign of sensitivity and promotion of the perspective of gender,” with a value of 750,000 pesos, a “Campaign to prevent community and family violence of physical, psychological, and sexual types” in the 11 municipalities with a value of 850,000.

There is even mention of the production and broadcast of a radio drama in three series of four episodes whose themes are human trafficking, community violence, and femicide. “The budget for its execution will be one million, 200 thousand pesos.”

APRO reviewed the state government’s YouTube channel: there are no public service announcements or videos on the theme. Neither are there any mentions on the administration’s website, save for records of the presentations given by Dilcya García, the assistant prosecutor for Attention to Crimes Linked with Gender Violence of the state attorney general’s office.

“…the alert is not a political punishment, since violence against women is not an invention, it is a form of violence with a structural character that exists worldwide, which is why it is difficult to eradicate it,” notes the bulletin dated November 26.

Among the most exorbitant costs is the following: directories of the centers of attention for women and their children in situations of violence, at 841,000 pesos; primer pamphlets of ‘services for women’ at 851,440 pesos; vests with the number of the phone line “no violence” at 524,053.20 pesos; shirts for the same phone number at 829,400 pesos; and magnets with the slogan “Residents of Mexico State: Join Together to Stop Violence Against Women.”

According to activists who have denounced dozens of cases in the municipalities covered by the Alert, not even these items have reached their hands. Moreover, the “ambiguous” slogans do not even properly inform the state’s women. Amador’s fear is summed up in a single sentence: “The Alert was coopted by political interests.”

Why the Pink Cross?
Irinea Buendía has a gentle face and salt-and-pepper hair. She has fought innumerable battles since 2010, when a policeman killed her daughter, Mariana Lima. She confronted officials who protected the killer, burying the case in paperwork. She, like other women, is convinced that there has been no substantial change since the Alert was issued.

“They said three things about the Alert: security, prevention, and justice, and to my eyes, none of those have occurred,” she says.

The 62 year-old woman does not rest. She stays resolute. She lives in Neza, one of the most overpopulated and violent fringes of the state, where in November the body of a woman was found with a bag on her head and signs of torture. She also knows Chimalhuacán like the palm of her hand: that was where her girl was killed, the daughter who today would be 34 if she were alive. It is also where Alejandrina Figueroa’s life ended.

Every day, Buendía visits neighboring areas to attend to other victims. “I haven’t seen anything (of the informational campaigns), none of the flyers that you spoke of. For me, the Gender Alert is happening at night, or who knows what they are doing… We have been meeting with women and they do not even know what a feminicide is. They come up to me and ask: ‘why the pink cross? Why does it say “not one more”?’; they ask things that they should know,” she explains.

She is an emblem of the fight against femicides. The case of her daughter reached the Supreme Court, which in March of last year resolved, unanimously, to issue an injunction that would allow for the reopening of her daughter’s case.

That was a precedent achieved with the cooperation of the National Citizens Observatory of Feminicide and Amnesty International, and led to the emission of the Gender Alert in Ecatepec, Nezahualcóyotl, Tlalnepantla, Toluca, Chimalhuacán, Naucalpan, Tultitlán, Ixtapaluca, Chalco Solidaridad, Cuautitlán Izcallli, and Chalco. In those municipalities there have been 24 cases thus far, and 17 more that were not taken into consideration, according to the records.

In her voice, attitude, and words, in Irinea you see a “combative” woman. Her blood boils when she shouts.

She knows that dried flowers will not help anything if everyone refuses to work together. More than ever, she says, civil society and the families of victims of femicides and disappearances need to unite. Truly pressure the government. Make it uncomfortable. Rattle the cage of overly comfortable authorities. “If we as mothers and fathers don’t join together, we will always be pushed aside very easily,” she affirms.

We know—Buendía concludes—that “the government is not at all interested in what happens to our daughters. What we demand from the authorities, and principally from the governor of the state, Mr. Eruviel Ávila, is an earnest commitment, because up on his pedestal he is saying that nothing is happening, but those of us who live in the community we know because the statistics of femicides speak for themselves. We don’t need to say more, he needs to open his eyes to the truth. We are demanding something real, we are basing our demands on what is actually happening.”

Alejandro Melgoza Rocha writes for Proceso magazine. This report was originally published on January 5, 2016, with the title “Edomex: Alerta de género ambigua y suntuosa” and is available at: http://www.proceso.com.mx/?p=425248