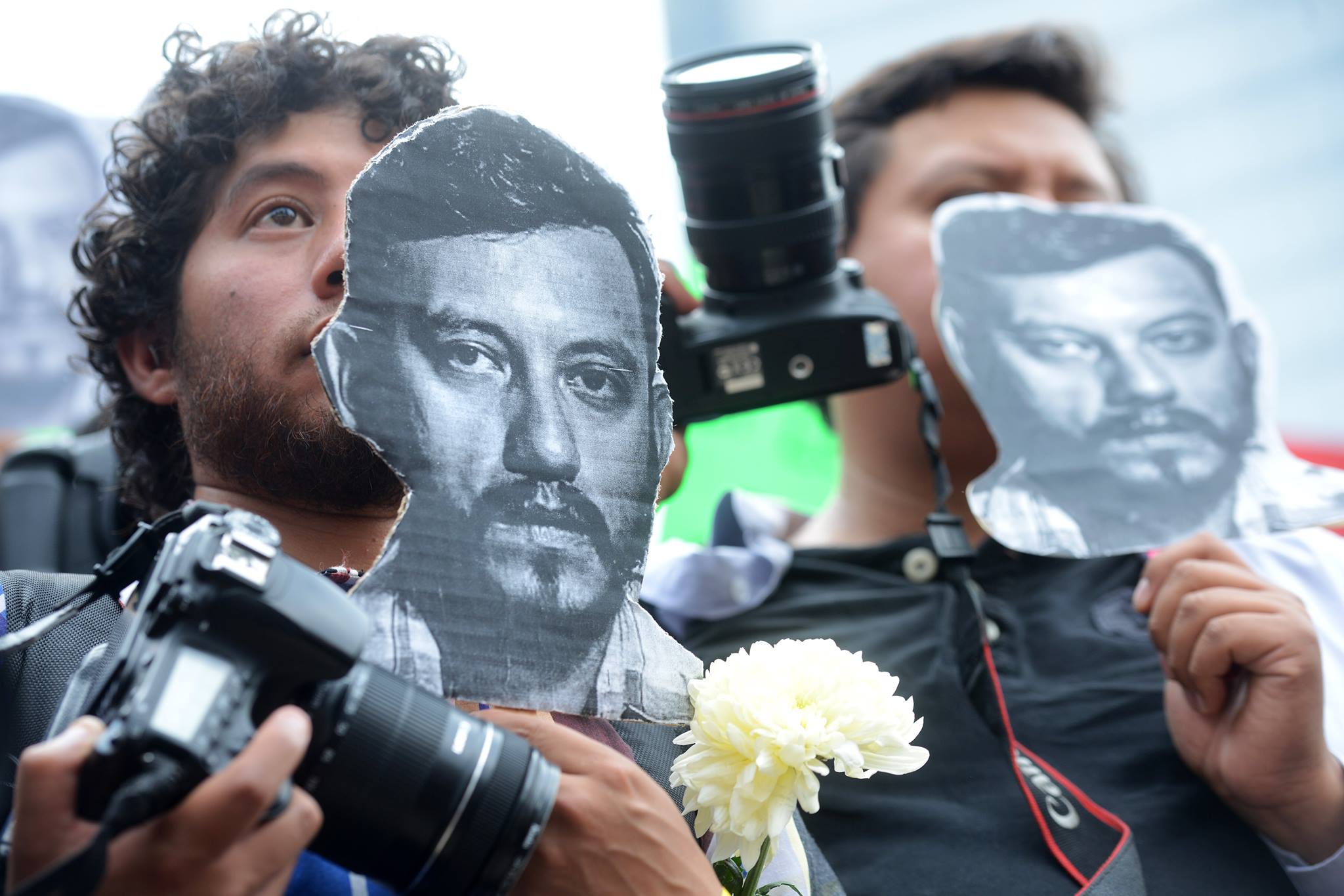 In October, TBI Program Officer Michael Lettieri interviewed Oscar Martínez, a photo editor and photographer with AVC Noticias, a news agency in Veracruz about what it is like to work as a photojournalist in that state. Martínez was a friend and colleague of Rubén Espinosa, the photographer murdered in Mexico City this July: while the danger of documenting the state’s reality is painfully apparent to him, he speaks with conviction about the importance of that task. –What is the importance of photojournalism in a situation like that of Veracruz today?
I think the eye of the photojournalist is very important, not just for denouncing what is happening in the context of violence in Veracruz, but also to make known the facts and abuses. If not for denouncing abuses, if society does not learn about what is happening, it would be worse. And if because of that we are now living difficult times, and dealing with problems of impunity, I nevertheless do not think any cluster of the powerful can hide or deny civil society its right to the truth.

–Does photojournalism have a different role than written reporting?
People are very visual, every day fewer people are reading, particularly in Mexico. An image can attract interest – both written and photo journalism are important, but with photographs people can have a more personal opinion, a clearer panorama of what is happening, although many times this can cause discomfort or indignation, but it is better that it provokes those feeling than if things happened and nobody cared. When the image creates awareness, it is achieving the objective, as in the case of the dead [Syrian] migrant boy on the beach: many people were upset by the image and there was more criticism of the outlets that published it than of those who caused his death. –So how does photojournalism avoid becoming exploitative, avoid becoming totally crime tabloid photography, given that images have that function of attracting attention?
Well, you do not need to show guts and gore to do that. And I think it partially depends on the training and preparation of the photographer.

–And how are photojournalists trained? Are there specialized programs or is it more of a learning process?
Well, here in Xalapa there is a bachelor’s degree in Plastic Arts with a specialization in photography at the University of Veracruz. But it is really a personal thing. There are courses, training, etc. Now we don’t just have to take courses in photography, but also in security and safety, the rights of people, digital security… these are things that are changing. Many of those are outside courses – in Mexico City or with the support of organizations. We just got back from a course on security, digital security, and psychological support. Rubén [Espinosa’s] death was a very hard blow [Espinosa had worked as a photographer for AVC Noticias], it was something that we hope will never happen again. –How have things changed since Rubén’s murder? Obviously, you are taking certain security measures, but other than those “defensive” measures, have other things changed in terms of how photojournalism is practiced?
Yes, things have changed, and not just for AVC Noticias. In general, everyone is more alert, at the demonstration on October 2, when there are marches across the country [in commemoration of the 1968 massacre of students in Mexico City], all the photographers arrived together, and we keep in communication more, we check in all the time, we are a little more organized.

And this is not just because of Rubén, there was a photographer for the agency, Karlo Reyes, who suffered an attack by plainclothes police that sent him to the hospital. He was beaten at the independence celebrations at Plaza Lerdo, and because of that we started to organize ourselves when we go out on coverage assignments.

–Do you think photojournalists are experiencing something distinct from print journalists?
Well, people feel intimidated. When they see you with a camera… you could be carrying a gun and nothing happens, but when they see you with a camera things change. When I was covering the floods in the northern part of the state a pickup stopped next to me, and when they rolled down the windows it was a couple of guys with guns and they asked me why I had taken pictures of them, and I explained that I was taking pictures of the flooded street, they made me show them the photos over and over and then they left, but I have colleagues who have been kidnapped, beaten, and had their equipment stolen.

–And is that a question of visibility? That you cannot go unnoticed with a camera? Or is it that photography, the idea that you might appear in a photo, that is a threat to some people?
It could be anything, as a photojournalist you just do your job, you don’t know what is going on with the people you photograph. You take the camera out, take your photos, and you put it away; you’re also at risk from everyday crime, the non-organized variety as the governor calls it, which is also increasing. –And there are also political problems, right? What happened with Karlo Reyes wasn’t because he was photographing someone involved in organized crime.
Yes, obviously. For us, the majority of aggressions come from the security forces, from state police agents who wash their hands of it, which is to say that the aggressors are in civilian clothing but they are always together. Those who attacked Karlo all had a white pin with a cobra on it.

–And how do you explain political attacks like that? Is there a clear motive?
We are a news agency, I don’t consider AVC Noticias to be a critical outlet – we only say what is happening, and there are a lot of things happening, and that alone is a motive for aggressions, threats, etc. There is a reporter at the agency who also received a death threat. We had to install cameras because people were coming into the office before dawn. The webpage has been hacked various times. They have gone in to rob the homes of journalists, they have taken computers and hard drives. We have a rock band made up of journalists, and they just broke into the house of the singer, who is a very critical columnist in Veracruz—it was the second time they had gone into his house. The first time they left a knife hidden in his bed and took his computer. They’ve also stolen our instruments.

–So is it an effort to hide the truth? To create obstacles to covering what is happening?
That is a question you should ask them. –Lastly, what do you want people to know about Veracruz?
Well, it is difficult, because I really love Veracruz, and I do not want people thinking badly about my state just because we have had a few bad governors. Above all, I would like to get rid of the notion that if a journalist is killed, it is because he was involved in something. That’s an idea that is frequently spread here, and it is not true, at least not in all of the cases.

–You mean the practice of “killing you two times,” first the body, then the reputation?
Yes, now they don’t mess around. In the case of Rubén, he was a very professional journalist, a great person. It’s not right that they say things that they invented. It’s just sad, that after they kill a colleague they still invent things, even when there is evidence to the contrary.