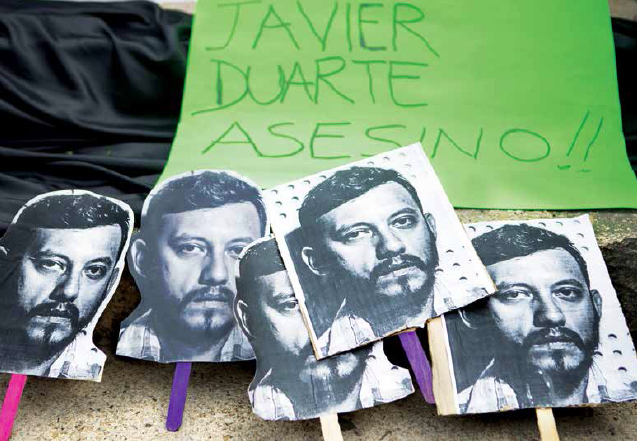 In late September, TBI Program Officer Michael Lettieri interviewed Norma Trujillo, a reporter working in Veracruz, principally for La Jornada de Veracruz, about the conditions in the state. Veracruz is probably the most dangerous place in Mexico for journalists, making Trujillo’s reporting on social issues (see the inset below for translations of her work) all the more impressive and important. In this interview, she talks about the factors that make journalism in Veracruz difficult and often dangerous, and what it is like to be on the front lines of a state in crisis.

–Can you briefly describe the conditions in Veracruz?
It is a complicated situation with many variables.

First, there is a restriction of free expression that stems from a tainted relationship between the government and the owners of the media companies as well as with some journalists.

Second, there is the socio-economic issue that has to do with the working conditions for journalists, some of whom earn 4500 pesos per month, which is about 300 dollars. That means that the honest journalist has to work for as many as three outlets, for 12 hours a day, without a day off. That also impedes the quality of the information that is published. The media companies are not interested in investigative journalism.

Third, there is a lack of a culture of legality, which combines to create an atmosphere of censorship and self-censorship.

Fourth, there have been 15 journalists murdered and 6 disappeared, but each case is different. The problem is that all of those cases are going unpunished.

–It’s very interesting what you said about the relationship between the government and the media companies; would you say that the majority of outlets in Veracruz are tied to the state government?
All of them have a dependency through the advertising space that the government buys from them, but nobody knows how much the outlets receive; there is no transparency with regards to this and it is considered “reserved information” under the Law of Transparency and Access to Information, so it will not be made public until 20 years have passed.

Moreover, a large part of the media-owning businessmen are politicians, they were employees in the current government—there’s a local magistrate who was a leader of the PRI who is also the owner of newspapers. Duarte’s former spokesperson is in charge of media franchises.

–And without official advertising the newspapers cannot survive? Or is it a question of complicity?
No outlet has made an effort. There’s not a single outlet that has chosen the market as a source of income, they prefer the paid publicity.

It is convenient for the owners, and convenient for the government which is able to direct the editorial line to such a degree that the newsroom directors do nothing more than take the invitations to official press conferences they receive and resend them to their reporters.

–And in this context, how do digital outlets function? Do they offer a freer option?
It is the same issue of publicity. There is still censorship and there is a proliferation of webpages created by journalists that are ultimately looking to earn money through paid publicity. Very few give space to information on social issues and in general there is a very limited amount of information regarding violations of human rights.

–And does all of this represent a change? How have things changed with Duarte’s administration?
No. There’s not been a real change. In all the elections for governor there is evidence of fraud through votebuying, there is a diversion of public funds that are designated for combating poverty, and this has led to social decomposition and put the state’s finances deep in debt.

The debt began with Miguel Alemán, with Fidel [Herrera Beltrán] it grew, but Duarte was his finance minister and always affirmed that the state’s finances were healthy, until the day came when Duarte’s government could not pay its bureaucrats, it owes grants to students, it has not covered its commitments to businessmen, teachers, retirees, and peasants—it owes those who are entitled to social programs. There is a crisis.

And for journalists, the violence began with Fidel Herrera and grew worse with Duarte. And it is beginning in 2010 that you start to see the clashes between cartels, the disappearances of boys, of girls, adolescents.

–Right, that is the other question – how do you explain this increase in violence?
Before, with Fidel Herrera, there were episodes of violence, but they were hidden, they were not visible. With the change of governments, violence in the streets spiked in the in the north and center of the state. And the violence is moving into the municipalities – for example, the north and in Xalapa experienced some extremely violent episodes from 2010 to 2013.

–So violence against journalists has been a consequence of this general increase in violence?
No, because not everyone is working on the crime beat. Each case has its characteristics. More than anything, it is the link between government, businessmen (not just media owners either), and organized crime that has made any story involving corruption become dangerous.

Veracruz is a desirable state because it is very rich – and with the 112 planned hydroelectric projects, the drilling of oil wells, mines, and the presence of transnational corporations, making agreements with the government… there is a lot at stake.

–So the supposed wave of violence against journalists is more the result of various specific factors rather than general conditions?
It has to do with a crisis of political decomposition, in a state that has been governed for more than 70 years by a single party, the PRI, which tries to retain that power at any cost.

What it is, beyond the insecurity and the corruption, organized crime and a disorganized society, above all the issue is that nobody talks about what is happening in the state, and those who do face threats, harassment, and death.

So you have had to change the way you work as a journalist?
Those who try to practice a different form of journalism… we are continuing to do so and we are particularly worried that in our group there have been two deaths and various people threatened.

–You are speaking of Regina Martínez and Rubén Espinosa?
Right. And recently the attack on photojournalist Karlo Reyes.

Those of us who since 2012 have taken to the streets to protest the killings of colleagues. And those of us who have been threatened are there too, because of what journalism means.

There are journalists in the country who say that we should not protest, that we should focus on working instead. But when there are not conditions to do so you have to try to open a path. For my part, at least, I have been able to do investigative journalism, to cover social issues, but it was because I was foolishly stubborn in dealing with my editors. But not everyone can do that, and they have to do what they are told. That is why it is necessary to make changes. But that also puts us at risk.

–And what do you want people to know about Veracruz? What can be done?
I think in part it is necessary that the law is applied, that the crimes are prevented from going unpunished, that they are investigated for their connection to journalistic work. That the Federal Labor Law is applied, and that NGOs support the demand that violence against journalists stop. If we are not supported, this will not end.

Now we are worried that the atmosphere of violence is increasing as the next gubernatorial elections are approaching. That is where the journalist gets caught in the middle (not everyone of course, since some are seeking political positions.)