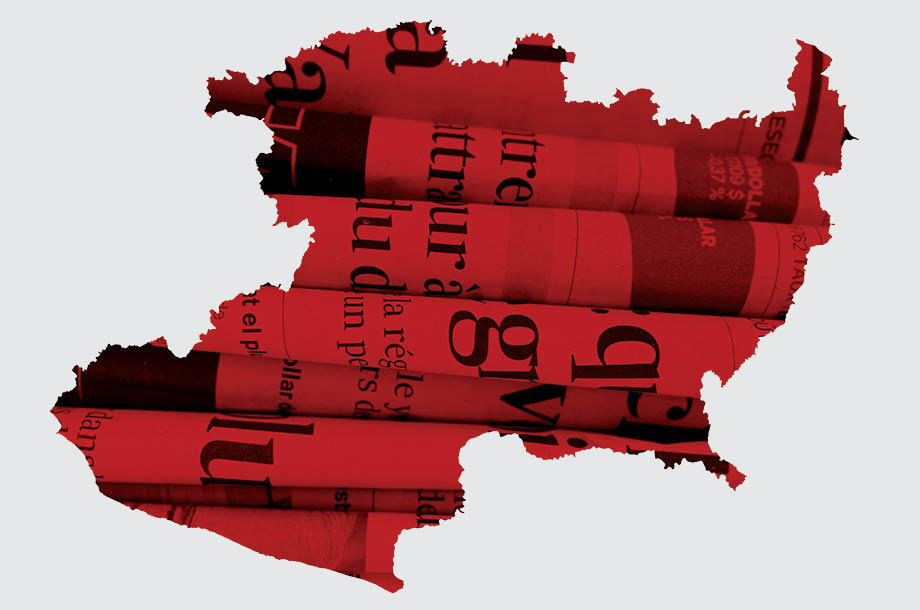 ~ This essay was originally published by Reporte Indigo on September 23, 2015 ~

Michoacán is the state that has registered the greatest number of violent incidents involving journalists. Seventy percent of the aggressions are attributed to government officials, and fewer than thirty percent are blamed on criminal cells. In Michoacán, the number of silent voices is increasing. Every day there are more journalists who choose self-censorship because the unspoken message leaves no room for doubt: in recent years four journalists have disappeared, six were murdered, 18 have been displaced, 27 have received death threats, and there have been at least 36 other attacks.

In the state there are at least two attacks per week, according the records of local journalists’ groups that represent the reporters who do not have access to human rights NGOs or the special federal prosecutor for crimes against journalists.

Writing in Michoacán, one displaced national correspondent explains, is like writing with an AK-47 at your head. It is constantly waiting for the shot, from an unknown hand, to put the final period on the story denouncing corruption and social decay.

That is why the press in Michoacán is the most docile, why it is so servile to the powerful, why it is at the command of organized crime and the ruling government. At the service of a power that sometimes lies in the hands of the same person, as evidenced by the criminal proceedings against the 872 state and municipal functionaries who were working for criminal cells.

No journalist wants to end up as another statistic marking the progress of the firing squad aiming at free expression in Michoacán. That is why so few write about the reality of the state. They do so at their own risk. Risking their lives every day, just to be able to spit a few lines of truth in its face, says another journalist who has suffered three death threats in two months.

Organized crime does not threaten. Organized crime kills, it executes. That is the sentence that criminal groups have given to Michoacán’s journalists over the last five years. Facing that message, all those who were called to meet with the heads of the cartels could not refuse. That was how some members of the media justified the reunions they were obligated to attend with the local bosses of the Knights Templar cartel—meetings that were captured on videotapes that are now currently in the hands of the federal attorney general’s office (PGR).

There are at least five tapes like the one exposed by Carmen Aristegui, where ‘La Tuta,’ the head of the Knights Templar, appears in a meeting with two journalists from Michoacán. The federal government knows about them, and the journalists involved are concerned.

There are at least two videos—a local journalist confesses—in which ‘La Tuta’ is meeting with more than 35 journalists from the entire state. The gathering was in an area of the Tierra Caliente. In the municipality of Apatzingán. It was at the beginning of 2010, when the boss met with the reporters and offered them support. There were petitions for support from some journalists. The cartel was generous, and compensated many of the journalists who were obliged to attend.

“Every day I wake up thinking if today is the day when the PGR will decide to make public the video in which we are meeting with ‘La Tuta’, or if a group of agents will come to my door to inform me of my arrest and take me to a federal prison,” says one journalist who is currently displaced and facing death threats from self-defense groups who associate him with the Knights Templar cartel.

Not seen, not heard
According to a report from the organization Reporters Without Borders, there have been no substantive advances in any of the cases of the four journalists who have disappeared in Michoacán. In each of the four, the investigations are “frozen” and the files have been, in some cases, set aside.

None of the case files indicate any possible names of perpetrators.

“The investigation of the disappearance of José Antonio García Apac,” Reporters Without Borders explains, “is practically at a dead end. According to allegations, the journalist had information concerning the collusion of state and municipal officials with narcotrafficking.”

The case of the disappearance of Mauricio Estrada Zamora, correspondent for the La Opinón de Michocan newspaper, has been abandoned. The day of his disappearance he had worked on a story about the dismantling of a group of narcotraffickers in the area of Aguililla. His family has not been informed about the state of the investigation.

Of María Esther Aguilar Canno, nothing has been heard since November 11, 2009. She disappeared when she left her house, after receiving a phone call from a presumed source. She was a specialist in crime, covering the police beat. “Shortly before disappearing, the journalist had written about the abuses of power and brutality committed by a head of public security in the municipality of Zamora,” Reporters Without Borders explains.

Another disappeared journalist is Ramón Ángeles Zalpa, who for many years was a correspondent for La Voz de Michoacán and Cambio de Michoacán. The last time he was seen was April 6, 2010. He was characterized by his denunciations of the presence of organized crime in the illegal logging operations in the forests of Cherán. His file is found in a box of cold cases, after 18 judicial findings concluded only one thing: he is disappeared.

Murders: Unpunished and Un-investigated
None of the murders of journalists has been clarified by the appropriate authorities in Michoacán. Moreover, a national correspondent explains, there are not even ongoing investigations to provide the possibility that the perpetrators or masterminds will be arrested, despite the fact that there are clear indications of who committed the acts.

Neither has the PGR sought to take over the cases, despite the insistence of a few local NGOs. There is no will to clarify the crimes, explains Analía Sánchez, from the foundation for Families of Disappeared Persons and Crimes Against Journalists.

According to that organization, the most that state authorities have done has been to compile a file on the activities of murdered journalists. That file is buried in the bureaucracy of the state attorney general’s office, and sometimes, simply through paperwork, the documentation of the cases are shared at the insistence of the state commission for human rights.
That is the state of the investigations into the murders of Jaime Arturo Olvera Bravo, of La Piedad, Michoacán, who worked as a journalist for La Voz de Michoacán. He was executed on March 9, 2006, while taking his five-year-old son to school, when a gunman approached and shot him at point-blank range.

Neither are there officially-identified perpetrators in the death of Gerardo Israel García Pimentel, a reporter for La Opinión newspaper, who was executed on the night of December 8, 2007, while leaving the newspaper’s offices. His killers followed him for various blocks under the gaze of the local police of Uruapan.

Another archived case is that of Miguel Ángel Villagómez Valle, the director and editor of the regional newspaper La Noticia, in Lázaro Cárdenas. He was executed on the night of October 9, 2008, after being “taken” by a group of gunmen. He appeared dead, shot six times in the back.

The case of Martín Javier Miranda Avilés, a reporter for the newspaper Panorama and a correspondent en Zitácuaro for the news agency Quadratín has also gone unpunished. Nothing has been done to clarify the way in which he was stabbed to death inside his home. Nobody has demanded clarification.

Another case that has gone unpunished is that of the host of CB Noticias and a columnist for La Voz de Michoacán, Enrique Villiacaña Palomares. He was murdered on April 10, 2010, after being kidnapped. He was shot to death and his body was dumped on the streets of Morelia.

The same impunity prevails in the case of Hugo Olivera Cartas, the director of the local news agency ADN de Apatzingán, and a collaborator with the news agency Quadratín, who was found dead in his car on July 7, 2010. He had been shot four times and his body showed signs of prolonged torture.

“A front page story is not worth an obituary,” says a journalist who for 15 years has worked for one of the principal newspapers in the state. “Nobody goes to see the families we leave behind, and they will not even clarify our deaths.”

Jesús Lemus is the founder of the newspaper El Tiempo in La Piedad, Michoacán and the author of the book “Los malditos, crónica negra desde Puente Grande.” He was jailed in 2011 after being accused of belonging to a criminal group and sentenced to twenty years in prison. This essay originally appeared under the title “Voces de silencio,” and is available at: http://reporteindigo.com/reporte/mexico/voces-del-silencio