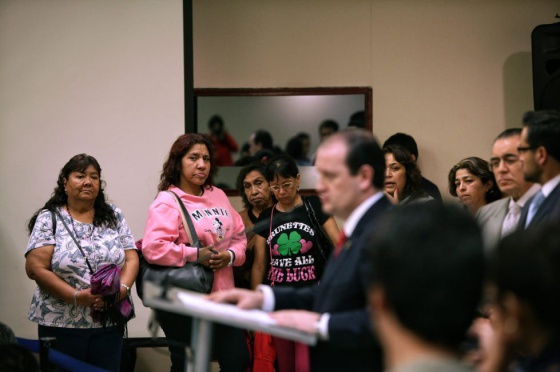 ~ This article was originally published by El País on September 28, 2015 ~ Family members of the victims at a press conference about the Heavens case. / S. G. (EFE)

The Heavens Case, the largest narco-related killing in Mexico City with 13 young people murdered, now has a sentence: 1,560 years in jail for three perpetrators. If there is a sentence, however, the cause of the killing, the objective explanation, continue to be a mystery: this is a recurring equation in the Mexico’s system of justice.

The same weekend as the anniversary of the Ayotzinapa disappearances, a case marked by its black holes, a tribunal has published a sentence for the trio involved in the Heavens Case, a brutal crime that, while not at the level of Ayotzinapa, is very similar in terms of its errors in investigation, the participation of police, and the absence of a solid official explanation of the events.

“It does not mean anything. They are not sentenced for participation in organized criminal activity nor for committing a forced disappearance. We still do not know what happened. We demand that the authorities respect our right to know the truth. Why they did it, how they did it, what happened there. We still have the same unknowns that we had at the beginning,” says Eugenia Ponce, the aunt of one of the victims.

The event occurred on May 26, 2013. That Sunday morning, 13 young people from the rough neighborhood of Tepito were kidnapped in an afterhours club in the city’s center, 50 meters from Paseo de la Reforma, the capital’s main avenue and the axis of financial and urban life in Mexico City. The affair came to light four days later in the media and for weeks was a political hot potato for the city’s office of the prosecutor and its mayor, Miguel Ángel Mancera. Public opinion demanded to know whether the brutal methods of organized crime and barbarous impunity that reign in other areas of the country had reached the heart of the capital, which had long thought itself free from the madness of narcoviolence.

The management of the case and the communication about it were erratic and caused continuous controversies, fed—like the recent case of [Rubén] Espinosa—by systematic leaks. Until August, three months after the kidnapping, the victims had not been found: they had been mutilated and buried at a ranch in the outskirts of the city. Before and after the discovery there was a wave of arrests that did not bring any new information that could explain the caliber of the massacre.

The prosecutor’s office and the mayor maintained that organized crime was not involved in the affair (as in the worst zones of Mexico), but was rather the result of a conflict between drug dealers, a theory that not only clashed with the operational capacity required to put thirteen people into vehicles in an area of the city covered by cameras and police, but also was incongruent with the manner of killing: torture, dismemberment, burial in a common grave. The mark of the narco.

The sentence this Sunday condemned three of those involved: Ernesto Espinosa Lobo, one of the owners of the club, and two others, José de Jesús Carmona and Víctor Manuel Torres. But no more details have come out. The Heavens Case disappeared from public attention two years ago and entered into a silent judicial tunnel. The 1,560 years in prison for these three perpetrators, who, by law, will only serve a maximum of 50, are a new development in the case. The root of the massacre remains in limbo.