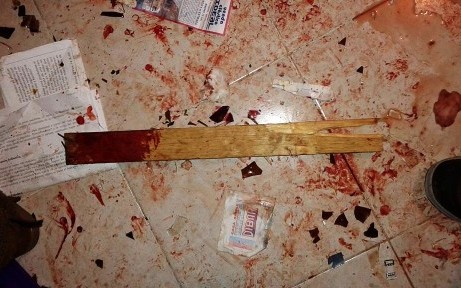 ~ This article was originally published by AVC Noticias on June 5, 2015 ~

In Xalapa, Veracruz, on June 5, 2015, photojournalist Rubén Espinosa documented a vicious attack on eight students from the Universidad Veracruzana. A day later, on June 6 Rubén Espinosa began to be harrassed by men in Xalapa. The brutal attack on the students took place two days before Mexico’s mid-term elections. On June 9, feeling increasingly under threat, Rubén Espinosa fled to Mexico City where he was murdered on August 2 in another brutal slaying with four other people, including the social activist who used to work in Xalapa, Nadia Vera. Two months after the attack on the eight students in Xalapa that Espinosa documented, news magazine Proceso reports that the state proseuctor in Veracruz has archived the file and ceased its investigating.

This story, and Espinosa’s accompanying photos, are graphic evidence of what students, professors, activists and journalists in Veracruz call “a climate of terror.” ~ Patrick Timmons Xalapa, Veracruz.- With batons, nightsticks and machetes a group of ten armed men attacked 8 students from the University of Veracruz early Friday morning. Four of the students were women, and the victims were left with severe injuries such as the loss of all teeth and a fractured skull.

The students were admitted to the Dr. Rafael Lucio Medical Center. The family members, friends and compañeros of the wounded blamed the Veracruz State Government for what happened during and after the attack.

Julián Ramírez, University of Veracruz sociology student, alleged that according to the victims, the students were celebrating the birthday of one of the occupants of the house at 2B Herón Pérez Street, just one block from the offices of the state headquarters of the Partido Revolucionario Institucional (the PRI) when they came under surprise attack.

The students from the faculties of Philosophy, Education, Sociology, Engineering, Administration and History are between the ages of 19 to 32. Seven of the eight were hospitalized. Three have serious injuries: one sustained a machete blow to the face, another a broken jaw, and a third with a fractured skull. The others have injuries and wounds from sharp weapons.

“We hold Governor Javier Duarte de Ochoa and the Minister of Public Security, Arturo Bermúdez Zurita and the federal government responsible for this attack and whatever else happens in this climate of terror, criminalization of protest and persecution of young people.”

It was about one o’clock in the morning when a group of ten men armed with semi-automatic rifles, machetes, bats and sticks burst into the small house breaking glass while shouting threats and insults. After the attack, the group of hooded men withdrew, taking two computers and eight cell phones with them. Minutes later officers from the Ministry of Public Safety arrived in five squad cars (one of them numbered 20623).

“The students were left exposed and without protection while they shouted for help and to cover them for they would be killed if the police left… Inside the threats were: you are going to die, bastard, and bajale de huevos.”

Julián Ramírez and other university students condemned the violent acts against the student body, activists, and others, qualifying them as political persecution.

They insisted that the attack was meant to send a fearful message around the elections to be held on June 7.

“It is a message in a campaign of terror for the general population (…) This was a level of fury that only occurs when they want to exercise the greatest amount of violence without killing somebody.”

Finally, they demanded that the rector of the Universidad Veracruzana, Sara Ladrón de Guevara, issue a statement. They also allege that activists and students have been scapegoated.

More than ten hours after the attack, approximately at 11:20 in the morning, investigating prosecutors arrived at the house to begin work and cordon off the crime scene. As of midday, Friday, no criminal complaint had been filed.

Rosalía Hernández writes for AVC Noticias. This article was originally published with the title “Encapuchados atacan a estudiantes de la UV” and is available at: http://www.avcnoticias.com.mx/resumen.php?idnota=204028