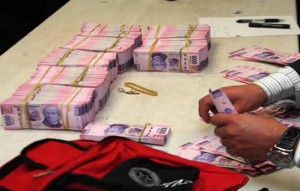 In January of 2012, the attorney general’s office seized 25 million in cash that had also been sent through the airport in Toluca, capital of Mexico State.

“Immunity for the great thief, jail for he who robs bread.” – Pablo Neruda

It must be asked: what is the purpose of the millions of pesos that are continuing to be sent from the state of Veracruz to Mexico State, with people close to or working for the Veracruz state government?

Once more a scandal has come to light that directly connects money that leaves Veracruz to people very likely related to power in Mexico State.

To whom and why are they sending millions and millions in such a constant fashion?

In January of 2012, the attorney general’s office seized 25 million in cash that had also been sent through the airport in Toluca, capital of Mexico State.

By what accident do these shipments come to light particularly during election season?

Who up there on the altiplano is receiving the money that is sent by politicians in Veracruz, and for what?

Twitter user Maruchy Bravo Pagola surprised us this morning when she revealed on her Facebook wall that one ‘Manuel’, arrested by federal police at the Toluca airport with 5 million pesos in cash, is no less than Mariano García González, the brother and agent of Francisco García González, a close friend of governor Javier Duarte de Ochoa.

And we do not doubt Bravo’s account, because she has detailed knowledge of all those close to state authorities, since she was once part of the state bureaucracy during the administration of Fidel Herrera.

I remember that in those times the reporter Maruchy Bravo was a loyal follower of Fidel Herrera.

Many times she approached young reporters to ask for their help with the political projects of the man who would ultimately become her boss. Later she would place in the government a person whose time as a public administrator is still talked about.

Veracruz, as everyone knows, is facing a severe economic crisis brought on by a brutal pillaging of public resources.

Nearly five years has not been sufficient for those who were strategically placed in cabinet positions by Javier Duarte, who at every instant has refused to allow the authorities to prosecute them for this looting.

These facts have been denounced by the federal auditing office, and even reported to the attorney general’s office, where the findings are currently frozen by the new Attorney General, Aracely Gómez of the PRI [the political party of Javier Duarte].

Today, many of these pillagers of public resources—who evidently did so with the permission of their higher-ups—are now facing possible charges for this shameless embezzlement of the peoples’ money. And they are thus desperately seeking immunity.

Tarek Abdala is another protagonist of the looting during his stint in the state treasury, he needs immunity to avoid prosecution. He is attempting to become a congressman for the district of Cosamaloapan.

And what to say of Nohemí Guzmán who is not facing charges but during her time in the public safety ministry never did anything, but did concern herself with filling various warehouses with provisions that she is now distributing to ensure victory in the June 7 elections.

We cannot forget to mention the former mayor of Tuxpan, Alberto Silva, aka ‘The Swan,’ thanks to whom the water of the Pánuco river will be exploited by Monterrey for 50 years [he signed a contract granting water rights to a company from Monterrey]. And who looted the finances of the municipality that he governed so poorly.

Later as a spokesman for the state, he did nothing. Mute. [“Como vocero del estado fue eso. Voz cero.”] He did nothing to improve the image of those in office who absolutely nobody knows what they do, because the citizens of the state find themselves affected as never before by crime, robbery, killings, disappearances, unemployment, etc.

Recently Miguel Yunes, the former PAN gubernatorial candidate, declared: I have said it time and again: “If Duarte had an ounce of shame he would resign the governorship, but he will not because there are 559 days remaining in his term and he wants to continue looting the treasury; but in time he will pay the consequences…”

Only a few days have passed since that declaration, and it now comes to light that people close to or associated with the government of Veracruz are continuing to take fistfuls of money to Toluca, in Mexico State.

Above all because the public finances of Veracruz are bankrupt. Where are they getting such a pile of cash?

With the state economy stalled by a lack of investment in public works, declining purchases, a brutal growth of poverty, and a political class focused on ensuring that PRI candidates win their congressional elections because they need to cover their backs, we ask again: from where is this money coming from?

We hope that someone from the cabinet will emerge to face public opinion about Maruchy Bravo Pagola’s allegations, charges that only put two and two together and revealed one more fact that should help the attorney general to act once and for all to stop the looting of public resources in Veracruz.

It is necessary for Javier Duarte de Ochoa to explain to the residents of Veracruz what relationship he has with the man arrested in Mexico State and the origin of the other 5 million pesos that were sent.

Today, incidentally, it happened that the federal police who arrested Mariano García González, brother of [Duarte’s] friend Francisco García González, tried to make public the arrest, but how many more shipments of money have been made and not reported because of “agreements” with the police who were present at those moments?

There are many questions. With luck someone from the administration will have a bit of shame and will emerge to explain to the residents of Veracruz what is happening. What are the politicians doing with the resources that do not belong to them, but to a people who do not see public works anywhere, who do not see schools, who do not see jobs, who do not see development, and who suffer unemployment, insecurity, and more.

This situation is worrisome because it keeps the state paralyzed, sunk in poverty and corruption. Residents of Veracruz do not deserve a class of PRI politicians who continue behaving in this way, who evidently have only cared about enriching themselves with the needs of the people.