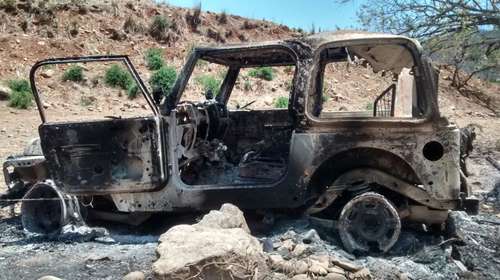 One of the four vehicles burned during a military operation in the communities of Tamazula, Durango. Photo: Javier Valdez Cárdenas

Death is intimate, a neighbor, around the corner, bound up with us, and although we would wish it otherwise, it is daily and even domestic. That is the nature of organized crime in Culiacán, considered one of the most violent cities in the country, a cradle of narcotrafficking and the sanctuary of some of the most important capos.

This violence, which—at least in Culiacán—the state government tries to blame on disputes between local drug dealers, has left close to 120 dead this past May, more than in any other month of 2014 or 2015.

It is this reality that makes those who study the topic assert that narcotrafficking is not a simple issue of crime and punishment—an affair of “others,” an issue of those who are in the business. Narcotrafficking is, they say, a form of life that splashes on everything and sometimes floods over the banks.

Among the 120 shootings in the past month, one particular homicide caught the attention of even Sinaloans accustomed to the violence of bullets and executions. Five people, four of them minors, were killed as they traveled on “Heroico Colegio Militar” Drive in the south of the city.

Among the victims was a 13-year-old boy, a student at a primary school three blocks away. The victims were traveling in a truck when they were fired on from another vehicle. At the scene, police found fifty-six 7.62mm shell casings, the caliber used by AK-47s.

The child was memorialized with a ceremony at his school. Between sobs and hugs, his classmates commented that they had killed “the big kid.” State authorities tried to minimize the incident, despite the fact that across the state on the same, day eight others were killed in the same way.

“We have some small problems in the fight against drug dealing; if you look at the percentage of executions related to gang rivalries, it is upwards of 80, 85 percent; we are implementing the usual operations, our police are not resting, when they’re not here, they’re there, one day to the next, the issues we’ve had in May, we’re going to get it under control,” announced governor Mario López Valdez during a tour of Mazatlán.

López Valdez added that in 2010, “people went out at night, and there were twice as many murders then. Without a doubt, the problems now are just between the gangs.” He said that there would not be special task groups, since the efforts of the different federal and local forces were bearing fruit, and he called on the citizenry to remain calm.

The Banality
Tomás Guevara, a psychologist and professor at the School of Psychology at the Autonomous University of Sinaloa (UAS), is one of the few experts who have researched the phenomenon of violence, youth involvement, and social conduct in relation to criminality and its effects.

The academic laments that violence is now a part of daily life and that citizens view it as something habitual, normal, included in the daily routine of children, adolescents, and adults.

He notes that, “in the city the phenomenon of violence is ever more banal. There has been a process of normalization, where things that were strange are now familiar to us. We keep finding children who are resorting more and more to violence to solve their differences or to prove themselves, to demonstrate that they deserve to be in a gang, that they are capable of ‘doing the deed’ of a crime, and they look to violence as a means of constructing identity as a part of the counter-normative discourse of violence that we are experiencing.”

Faced with a scarcity of cultural, educational, and social programs from the three levels of government tasked with attending to the needs of youth, Guevara warns that minors “are educated” on the street or in school, spaces that reproduce the stereotypes of criminality. And against that, he emphasizes, there is no competition.

“There is no state cultural or social project for youth. Without an alternative to censure, criticize, or question all the violence that surrounds them, they end up accepting the terrifying acts that occur in our society, and that is why we see children being ever more violent.”

Guevara asserts that one sign of this uncritical acceptance of violence is how adults and minors gather at crime scenes to take pictures and videos and post them to social networks, rather than being afraid or expressing pain or indignation. “In this banality of violence, which is nothing more than a process of normalization, terrifying crimes are just an everyday thing for us.”

Our Everyday Dead
In Culiacán there are more shrines along the streets, medians, and curbs than benches in the public gardens. Inhabitants of the Sinaloan capital leave their houses and are confronted with these scenes of crosses and epitaphs as they go about their day. But violence is also the product of police and members of the armed forces.

This past June 15, helicopters from the Marines shot at civilians during an operation in the communities of Acuachane and Tobiba, near Tamazula, a municipality in Durango that is closer to Culiacán than the capital of Durango. The raid left two dead, two wounded, and four were arrested—all of them minors.

The Marines were hunting Adelmo Niebla González, an operator of the Sinaloa Cartel, who had escaped from prison in Culiacán in May of 2014. The Tamazula youths had fled in four vehicles which were subsequently burned by the Marines, who asserted that the civilians had shot at them.

In the denunciation filed with the state Commission for the Defense of Human Rights, the family members of those arrested indicated that the detainees were beaten and that the Marines forced them to hold and fire guns.

“They made a 13 year-old hold a pistol; he didn’t want to and they hit his back; the boy of 17 they made hold a rifle so he could shoot it and he wouldn’t,” declared a woman known as Brenda, a resident of Tamazula and the mother of one of the detainees. The boys were sent to the juvenile processing facility in Culiacán, and later to Tamazula, where they were finally released for lack of evidence.

This is cheap, easy death, crouching at two paces, near at hand, behind the corner, death not for having or not having a connection to narcotrafficking, but for living in a region wracked with violence and impunity, where crime is a routine and fear is no longer a novelty. Culiacán, where it is dangerous to be alive, where everything is the same, except that on the skin of this northern region, a few steps from the Pacific and at the edge of the abyss, there are more bloodstains, scars, and crosses on the side of the road.

Journalist Javier Valdez Cárdenas is La Jornada’s correspondent in Sinaloa. He is founding editor of RíoDoce, a weekly online news magazine published from Culiacán, Sinaloa. This article was originally published by La Jornada with the title “En Culiacán, la muerte se tornó fácil y barata,” and is available at: http://www.jornada.unam.mx/2015/06/25/sociedad/040n1soc