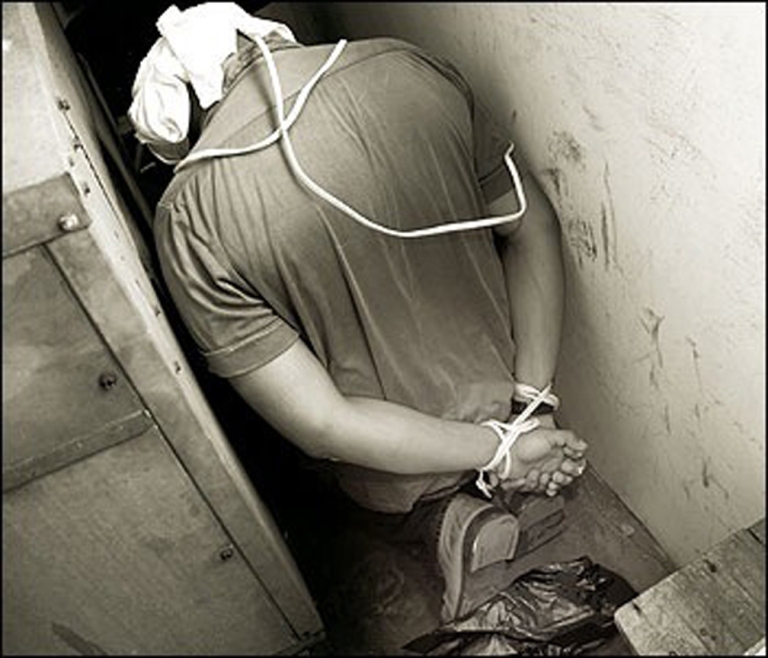 The Hidden Numbers
Jesús is 35 and lives in San Pedro. He runs a family business. That morning, as he did every day, he left his house to buy the necessary ingredients for the day’s work. Before he could turn onto the highway leading to Culiacán, a black Jetta blocked his path. He threw his car into reverse, but he collided with another car that blocked him from behind, preventing an escape. Two masked men emerged from the Jetta carrying rifles. One aimed at his head.

Jesús said he would give them the keys, his wallet, but not to hurt him. The other guy grabbed his hair and shoved him into the back of the other car. There was another man there, who put a dark and heavy bag over his head and threw him face-down on the floor, while tying his hands behind his back.

They traveled on dirt roads, five, ten, fifteen minutes, half-an-hour; turns to the right, to the left. Until Jesús lost his sense of direction. The driver tuned the radio to grupera music. He turned up the volume and kept going. Smooth streets, speedbumps, dirt tracks again, more turns, until the vehicle stopped. The sound of a motor raising a gate. Then shoves inside a house. He smelled urine and wetness. That’s when he knew it was a kidnapping, when the one holding the gun to his head spat a warning at him: “if you cooperate, it’s all good. A million, quick and easy. If they hand it over right now, in half-an-hour you’re back home…”

They contacted Jesús’ father. For three days they negotiated.

–Give us the money and he goes home whole. No cops. Or you’ll never see him again.

–Head toward Los Mochis, we’ll call you on the road.

Another call: “When you go over the bridge, stop, wait until there are no cars coming and throw the bags over the side.”

In his captivity, Jesús remained blindfolded, tied, on a mattress on the floor. Music played day and night, his captors entering to warn him: “The jerk loves money more than you, he doesn’t want to pay, time’s running out, buddy…”

That afternoon, they put him in the car again. Face down, hands and feet aching.

They got back on the road. From pavement and speedbumps to dirt tracks. There was a fresh breeze when they unloaded him. They told him not to take off the blindfold, they forced him down, head on the earth. And he counted to 500, as they had told him. When he finished, he waited more. Until he could only hear the sound of wind in the fields in the night. It has been a few years since the kidnapping. But Jesús has changed his life. He doesn’t use the same car for more than a few months. In less than half a year he sells and buys another. He also changes clothes two or three times a day. He faces, psychologists say, post-traumatic stress that he cannot overcome.

No Accounts
Jesús’s kidnapping, like that of other victims, is not recorded in the statistics of the state’s attorney general’s office (PGJE), which counted 22 cases in 2014. Without formal complaints involved, the numbers show fewer kidnappings than are actually committed.

Without a precise tally, what is clear is that there are far more cases than those recorded by the authorities. According to the most recent data from the National Survey on Victimization and Perceptions of Public Security (Envipe), each year there are around 105,682 kidnappings, but only 1,317 formal complaints on a national level.

This lack of interest in filing formal complaints for kidnapping is also common in Sinaloa. According to the Envipe’s survey of Sinaloan’s perceptions of security forces, those who inspire the least confidence are the traffic police, the municipal, state, and judicial police, in that order.

The Envipe was undertaken by the National Institute of Statistics and Geography (Inegi) from March 4 to April 25, 2014, and involved a survey of those 18 and up in 95,516 households in Sinaloa.

What the survey uncovers, the Center for Public Policy Analysis “Mexico Evalúa” notes, is that where kidnappings are concerned “it’s not a false alarm” and that without a doubt “we are facing a security crisis.”

It warns that “the problem is both real and grave,” since “the security policy is clearly unsuccessful, if there is a kidnapping every five minutes.”

On the Rise
Nevertheless, the statistics in the National Public Security System (SNSP) register an increase in the number of kidnappings in Sinaloa.

During the previous gubernatorial administration, the number of cases did not exceed 18 per year, but increased to more than 30 beginning in 2011, the first year of the current administration.

During the governorship of Juan Millán Lizárraga (1999-2004), there were 126 kidnappings registered; during the administration of Jesús Aguilar Padilla (2005-2010) the tally reduced to 77, and in the four years of Mario López Valdez’s government there have been 121 cases.

SNSP statistics reveal that in 2011 there were 33 kidnappings in the state and 32 in 2012, placing Sinaloa in twelfth place nationally for kidnapping rates.

By October 2013, Sinaloa climbed to the sixth ranked state for rate of kidnappings with 34 cases, behind Morelos, Tamaulipas, Michoacán, Tabasco y Guerrero. Last year the total dropped to 22.

The report Kidnapping in Mexico, from the organization Security, Justice, and Peace, ranks Sinaloa 12th among states with the highest rates of kidnapping from 1995 to 2009, with 325 cases. It occupied ninth place for most kidnapping victims murdered (35) from 1971 to 2009.

Another report on high-impact crimes from the National Citizens’ Observatory of Security, Justice, and Legality points out that “kidnappings continue to present worrying numbers on a national level, as there are four cases reported daily, when in 2007 the rate was one per day.”

The Observatory’s study declares that “the ‘inflection’ in the data is not of a sufficient magnitude to suggest that there is a downward trend nationally in kidnappings.”

Black Statistic
The Envipe indicates that in 2013 a quarter of Sinaloans above the age of 18 were victims of a crime. More than half (52.2%) consider insecurity the most important problem.

It also reveals that in Sinaloa a total of 603,192 crimes were committed, of which 556,182 were unreported or uninvestigated by the authorities: a black statistic of 92.2 percent.

Sinaloans do not report crimes for reasons attributable to the authorities, such as “fear they will be extorted,” “waste of time,” “long and difficult procedures,” “distrust of authorities,” and “hostile attitude toward authorities.” Additional reasons include “fear of the perpetrator,” considering it a “crime of little importance,” or because “there’s no proof,” and “other.”

In that regard, the Council for Law and Human Rights, A.C., an NGO that assists kidnapping victims, has documented that in 75% of the cases the federal police are directly involved. That is why “the victims prefer not to file formal complaints, a situation that leads to impunity for kidnappers and allows them to operate freely.”

The Inegi survey demonstrates that of all the crimes committed in Sinaloa, an investigation is begun in only 7.8% of the cases. And of all the reports that result in an investigation, in 53.2% nothing happens or the case remains unresolved.

High Impact
The study “8 Primary Crimes, Criminality Index,” carried out by the Center for Research for Development (CIDAC), concludes that of a total of 33 crimes, only eight negatively affect individuals’ perception of insecurity. And it is kidnapping that has the greatest impact.

Nevertheless, it indicates that “all crimes that are reported, from the most insignificant to the most grave, are processed by the prosecutor in the same way. And stealing a soda from a shop is not the same as kidnapping a person.”

That is why instead of criminal investigation, it adds, what occurs is a bureaucratic process that does not gather sufficient evidence to prove the guilt of a criminal before a judge. That without mentioning the possibility that one or all of the authorities involved are colluding or simply incompetent.

Victim by Victim
In its study Violence in Mexican States and Municipalities, the Citizens’ Council for Public Security and Penal Justice reported occurrences of kidnapping in the 223 municipalities of more than 100,000 inhabitants in the country. In it, Ahome [in Sinaloa] occupies the 45th spot with seven kidnappings, Mazatlán 56th with six, and Culiacán in 114th with 4 cases.

The study totals the partial rankings of the principal crimes (murder, kidnapping, rape, assault, violent robbery, and extortion) to create a total index of violence in each state in 2014. In this framework, Sinaloa is the fourth most violent state in the country.

Without Guarantees
This past March 13, the Specialized Unit Against Kidnapping (UECS) was inaugurated in Culiacán with the task, it was said, “of reducing this crime to minimal levels.” There, representatives of civil society organizations classified kidnapping as “the crime that wounds most deeply.”

A month later, on April 25, after the murder of the kidnapped businessman Ernesto Valdez Solano during a failed police rescue attempt, Governor Mario López Valdez said that he could not guarantee that there would not be kidnappings in Sinaloa, but he could “throw a net” on those responsible.

Sinaloan businessmen demanded that authorities “do their job because that is what they are there for.”

Forced Disappearance
Forced disappearance is “the arrest, detention, kidnapping, or any other form of denial of liberty,” regardless of whether it is the work of the state or those acting with its authorization, according to the UN High Commissioner for Human Rights.

Kidnapping
According to the legislation in place in the majority of states, a kidnapping is defined as a denial of liberty with the purpose of: 1) obtaining economic or other benefits; 2) causing authorities, the victim, or a third party to carry out (or not) a given action; 3) causing harm or injury to the victim or other person. There are also a few states that classify separately the crime of “express kidnapping,” though there is not consensus among them its distinguishing characteristics.

Black Number
Refers to the gap between crimes committed and crimes that are investigated.

Table: Elaborated with information from the Executive Ministry of the SNSP and the citizens’ organization Security, Justice, and Peace.

Judith Valenzuela writes for Ríodoce in Culiacán, Sinaloa. This article was originally published with the title “Secuestros, Sociedad Anónima” and is available at: http://riodoce.mx/gob-politica/secuestros-sociedad-anonima