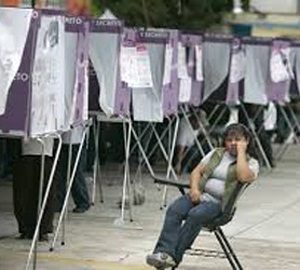 — Haven’t we been over this? We need to move forward. — That’s what President Peña Nieto said when he was questioned about his government’s turnaround on educational reform. He confirmed it a few hours after the elections. It seems that nobody showed Los Pinos, the office of the Mexican president, the electoral process or its results. A little more than 52% abstentionism is strong indication that there’s no healthy trust in political parties and the government’s official policies.

Civil society and government are marching to different beats. For us, in civil society, that the majority did not vote reveals a rejection of the politics running the country. For the government, it’s just self-exclusion from politics. That’s why we can see triumphalist attitudes from the ruling party and stubbornness from the president; they believe that with 28% of votes cast they have a blank sheet to turn the country into a paradise for foreign monopolies and a strange place for Mexico’s poor.

Neither the government nor society must forget that the 28% who cast votes for the PRI represent only 13% of the electoral roll. It’s a percentage that does not legitimize the elections and it does not authorize anybody to dispose of our resources and destiny. That’s why it’s a concern that politicians have not learned a lesson about electoral behavior but frivolously say, “We need to move on.” Although it’s still too early for a deep analysis, there are problems facing the country that need to be grappled with quickly and that need to be up for debate: to redirect the economy around anti-crisis policies, to facilitate the creation of at least 400,000 jobs for the rest of the year, increasing salaries by 25% and the strengthening of the internal market.

Speculators have brought down the value of the peso (it’s been devalued by 25%) and they continue taking dollars from our country. Meanwhile, the budget deficit is growing. The public debt has a dangerous rhythm of growth: 1.5 billion pesos per day. Oil is tumbling because of the fall in prices and because we have handed it on a silver platter to international oil giants. We can’t continue with the same attitude. We can’t go on because this context defines the possibilities of democracy and social participation. The conditions governing public disagreement and protesting are worsening. What’s at stake, in the final reckoning, is the nation’s future and the future of today’s youth, and the young people who are that future. Nobody has the right to burden them with debt.

If the reforms — nay, the counter-reforms — to the Constitution have left us orphans of the principles that we used to cherish: the second generation human rights principles that Mexico managed to place in the 1917 Constitution; if these counter-reforms are bringing us a deeper, dependent relationship on the economy, politics and military of the United States, now is the time to push back, to return to the path we were on. Maize producers have identified the strategic importance of this crop for the economy and our national culture. Indigenous people and communal landholders have joined the fight to defend natural resources on their lands. They know the value that they have for their survival and the country’s sovereignty.

Primary school teachers, on whom rests the great task of education and shaping Mexicans, have questioned the counter-reforms in education because they know the consequences they bring for workers in the education sector: firings of up to 60% of teachers and the increasing privatization of today’s public school. The reforms will put classrooms beyond the reach of poor children.

Just as a brave group of wandering indigenous groups dared to bring a new face to the Valley of Mexico, founding Tenochtitlan (Mexico City) in 1325, history demands a new founding for the country, with the best of its past and the best of the values of those generations that today identify themselves with the roots and utopia of the nation that we have forged. On June 7, 2015 the majority rejected the country’s current direction, and the natural task of that majority is to organize and coordinate the “No.” The history and the country demand it, right?

Oscar Loza Ochoa is a past President of Sinaloa’s Human Rights Commission and currently is in charge of institutional relations for this human rights ombudsman. He contributes a weekly column to Razones.com, an online newspaper based in Sinaloa, Mexico. The original article appeared under the title, “La realidad postelectoral. Abstencionismo, fuerte indicador de desconfianza,” available at: http://rrazones.com/index.php?option=com_content&view=article&id=2551:la-montana-del-11-junio&catid=25&Itemid=139. He is on Twitter: @Oscar_Loza.

TBI Translator Patrick Timmons is adjunct professor of Political Science and Faculty Affiliate at the Center for Inter-American and Border Studies at the University of Texas at El Paso.

One thought on “Mexico’s Reality After the Elections: Abstention, Strong Indicator of Mistrust – by Óscar Loza (Razones.Com)”