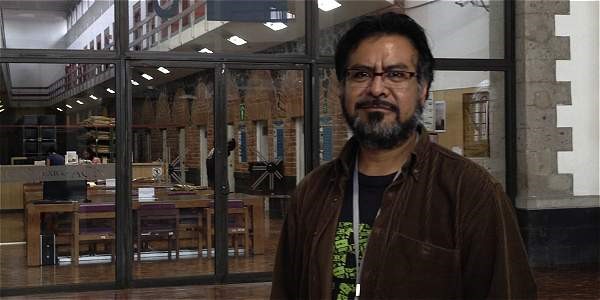 Rodríguez, in Gallery 2 of Mexico’s National Archive (AGN), a place of discoveries for his books. Photo: Ginna Morelo

The author of three books about the dark side of his country’s recent past talks about his work.

His voice breaks through the silent atmosphere of Gallery 2 of Mexico’s National Archive, housed in Lecumberri Palace, once one of Latin America’s darkest prisons and where Colombian poet Álvaro Mutis [link added by translator] was imprisoned for a few months.

Every day, from eight in the morning until six in the afternoon, Rodríguez researches in its archives the tiny details of the Dirty War undertaken by the Secret Police (Policía Secreta) during the lengthy period Mexico’s Party of the Institutional Revolution (PRI) spent in government.

This place is where he has found the names of those responsible for the massacre of students in Tlatelolco’s plaza in 1968, the cozy relationship between the press and those in power and the surveillance of intellectuals like Julio Cortázar.

These are just some of the secrets Rodríguez has revealed. Twelve years ago the journalist and writer turned the AGN into his home.

His books, Las nóminas secretas, La otra guerra secreta and 1968: todos los culpables show the horrors of the past that the Mexican state tried to hide until June 2002 when President Vicente Fox opened the archive to the public.

Five thousand boxes with 80 million index cards about what happened in the country from 1920 to 1985 were declassified.

The Tlaxcalan-born journalist says that arriving at the archive is “like trying to reconnect with one’s first love, the one you made those still unfinished plans with. Archives are that patient lover who knows that although you will leave you will always return. The archive waits for you and you always look to return. There is no way to break up.”

His investigations have resulted in three books and in hundreds of articles published in various media outlets and in the magazine Emeequis that he helped establish.

On reading his histories, the reader encounters an investigative reporter who reconstructs the so-called “invisible tyranny” in which his country lived. And he does that mostly through archives and then through interviews with surviving witnesses who have kept quiet until somebody comes to ask them about their experiences.

EL TIEMPO found him seated in a corner of Gallery 2 in the AGN in Mexico City.

What are your greatest discoveries in the National Archive?

Mexican archives, by way of contrast for the same period with others in Latin America, begin to show us a history that hardly registers among historians from other countries. These are the histories of a Mexico that is little or hardly known outside the country. The most repeated and clearest example is that the National Archive contains proof of prosecutions, detentions, torture and disappearances of hundreds of Mexicans at exactly the same time as hundreds of exiles from within Latin America came to Mexico fleeing military dictatorships. Mexico’s political police archives contain the memory of the decisions of those in power, who they were, and how those decisions were executed. The effects and the human costs.

With one hand the Mexican government opened the door to those fleeing Argentina, Brazil, Uruguay, Chile, Guatemala, Colombia and other places, and with its other hand it ordered massacres in Guerrero’s mountains against Lucio Cabañas’s guerrillas or in cities linked to the 23 September Communist League [Liga Comunista 23 de Septiembre].

Archives tell us who we are – as individual human beings and as societies – when we are in the shadows.

How difficult is it to uncover the things you have found?

It is not difficult if you want to invest some time and have some patience. Those are the conditions history places on you.

Of all these reported, lived or recounted histories, what’s the one that has marked you most?

The files that describe torture, the images of bodies torn into shreds, the stories of guerrillas thrown into the sea off Acapulco, Guerrero, the home state of the 43 disappeared Normalistas. To see and read these things changes all meaning you have in life. To be able to look on when family members of the disappeared search for information in

these archives, listening to how they have been broken, how their whole being has been torn into little pieces. Those are things you never forget.

It’s impossible to forget the letter that writer José Revueltas (a political activist) wrote on 18 November 1968. At the time Revueltas was recently imprisoned in what is now the National Archive. On my blog I have tried to reconstruct the labyrinth that the letter must have followed so that later it could be “imprisoned” in the archive boxes in Gallery 2 where it could be found. It’s one of the greatest gifts the archive has given me.

Other marvels are things like the index cards that the police kept about Cortázar. The archives carry you from fear to astonishment, from darkness into the light. This is our invisible past.

Why did you break with the media after you established several of your country’s well-regarded magazines?

The media have been a key means for the undertaking of archival work. Little by little they have dared to publish things re-appearing from the past. But, it’s important to say that only a few have dared this undertaking. The formal distance I keep from most of the media mostly has to do with my ideas about how to undertake investigative journalism.

Archival investigations take days, weeks, months and no media outlet is willing to pay for you to be in the AGN. It’s difficult to convince media owners of the importance of the past as an original source for journalism. So it was better for me to steer my own course.

Investigations need their own freedom: patience, patience and patience. The archives are a little like a difficult to seduce lover but when you get there you are there (he laughs).

Do your discoveries put you at odds with the media? Have they closed doors?

The book La otra guerra secreta (los archivos prohibidos de la prensa y el poder) [The Other Secret War (The Prohibited Archives of the Press and the Powerful)] comes with anecdotes. No publisher wanted to publish it. I sent the text to Spain and it came back to Mexico as a Debate imprint published by Random House Mondadori. It was complicated for the traditional media to talk about it. It was no small matter. The book talks about the connivance between traditional media’s most sacred journalists and the powerful.

However, the book had the good luck that at least traditional media wasn’t its only outlet. By chance, the Internet existed at the time.

What consequences have you faced living your life against the grain?

A lot of personal satisfaction. Even before those stories that can make you famous, there are those stories of a lot of people damaged by power, where abuses and excesses of power left hundreds of lives broken, tortured, persecuted and disappeared.

You have written books but you’ve also entered the digital world with your blog, ‘La tiranía invisible’ [The Invisible Tyranny]. Why?

The blog’s name came from a document found in the AGN. It’s a forty-one page document that’s the spinal cord of my book, La otra guerra secreta [The Other Secret War]. In my next book that’s soon on the way, we are going to reveal who the author of that document is and what this person represented for the construction of political power. What the document states is actually what ended up happening.

Some years back, Mario Vargas Llosa defined Mexico’s one-party political system as the perfect dictatorship. It seems to me more like an “invisible tyranny,” which is what I describe in my essay.

We found you at the AGN investigating Ayotzinapa. What have you discovered?

The story about how a rural school became a headache for the PRI in the past, so much so that it ordered the Secret Police to spy on it. There are 200 pages of notes that follow the school’s students. Among them was Lucio Cabañas, a well-known Mexican guerrilla who studied at the school.

These findings are part of that memory that as Mexicans we refuse to look at, to deal with, to review. The documents about Ayotzinapa in the ‘60s and ‘70s are part of the DNA of our past violence against resistance by social groups.

What is your next book?

I am trying to reconstruct the relationship between intellectuals and power in this period. The quantity of information from those years is immense. Imagine all the connections that there are between issues and characters in Latin America. I’m sure that one lifetime won’t be enough. I’ve already been working on it ten years. I always say that I will finish this year. But I don’t know when. There’s no rush. The past isn’t in a hurry. And neither am I.

Journalist Ginna Morelo is a Colombian reporter. Follow her on Twitter @GinnaMorelo. This interview was originally published under the title, “Jacinto Rodríguez, el periodista que devela abusos del poder en México,” and is available at: http://www.eltiempo.com/mundo/latinoamerica/periodista-jacinto-rodriguez-munguia-entrevista-con-el-tiempo/14918178.