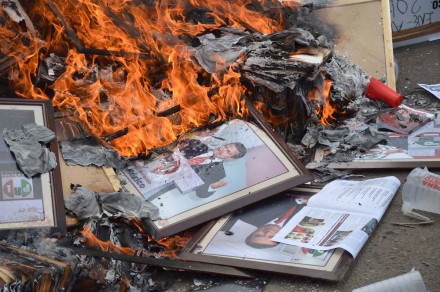 ~ This commentary was originally published by Proceso on June 4, 2015 ~

Mexico, D.F.—Even before the polls open on Sunday (June 7), the unfolding of the 2015 election foreshadows the defeat of the government of Enrique Peña Nieto. Contemplative, the president and his government have been reduced to mere spectators in a contest marred by violence and illegality.

The most obvious examples come from organized crime in Tamaulipas, Jalisco or Michoacán, or radical movements against the system in Guerrero, Oaxaca, Chiapas, and Puebla.

If you add up the twenty-some murders, the threats to primary candidates, candidates and political operatives in Guerrero, Oaxaca, Michoacán, Tabasco, Yucatán, Veracruz, Puebla, Estado de México and the Federal District, along with violent scenes from Sonora, just to mention the best- known cases, almost of half the states in the federation have been scarred by electoral violence before even going to the polls.

The case of Tamaulipas stands out.  On Tuesday, June 2, a grenade was tossed at the headquarters of the Federal Judiciary Commission (CJF) in Matamoros, in what marks the first attack of its kind against the judicial branch of government.  Even though the CJF has nothing to do with the electoral process, the attack – which left four wounded – is part of a broader climate of violence and illegality surrounding the electoral process.

Even more serious for the stability of the country is the illegality that has been fostered by those with political power and their system of parties.  Right in front of our eyes, the principal demonstration of this has been the Green Party’s persistent flaunting of election laws

With the backing of the PRI governor, with whom it is currently allied – just as it was with the PAN at the moment that it was victorious – the Green Party has dedicated itself to violating election laws to such a degree that it generated an organized social opposition campaign with the aim of disqualifying it as a party.

The insolence of the Green Party should not be forgotten after the present elections.  The discussion of its expulsion from the system of political parties must continue in order to define the circumstances under which a party should lose its license to operate, despite the fact that it is part of a successful political coalition.

Even though it was the most obvious case, the affronts of the Green Party are not the only ones.  Beyond the indications of collusion with existing organized crime groups, which is in and of itself a serious problem, there are many candidates and political operatives who act like authentic criminals on their own and organize among themselves to commit illicit acts or to hide them.

The leaks of recorded telephone conversations during the current election cycle amount to an anthology of illegality by those in power.

The urge to maintain or gain power has driven the parties and their candidates to violate the law whenever possible with the certainty that they will not be punished, thanks to the complete lack of accountability.

They know that beyond a scandal in the press, they might face a fine, which they can always challenge in order to reduce the amount they’d have to pay, or which can be paid with public funds.

This ideal world for the parties is a nightmare for ordinary citizens, one that is magnified by the lack of a head of state willing to make his authority count.  The electoral process has demonstrated this deficiency, and it transcends Peña Nieto himself, showing the world the decadence in which Mexico is immersed.

This article by Jorge Carrasco Araizaga was originally published in Proceso on June 4, 2015 and is available at: http://www.proceso.com.mx/?p=406421