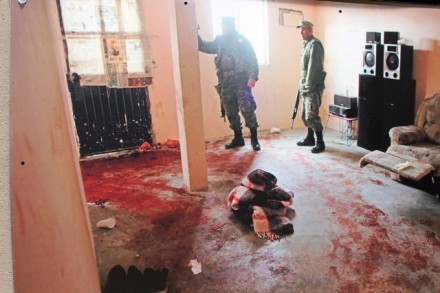 CHIHUAHUA, Chih. (apro).- Congressmen from the PRI, PRD, and Nueva Alianza disrupted today’s session of the state congress at the very moment when PAN congressman Rogelio Loya Luna attempted to present an initiative demanding that Governor César Duarte close the gallery exhibition entitled “Of Memory and Recovery of Peace.”

The contentious exhibition contains images of executions, massacres, and tortured and decapitated bodies, among other depictions of violent events that occurred before Duarte assumed the governorship of the state.

The legislators left their seats when Loya Luna rose to read his motion “that [Duarte] immediately send the necessary instructions to definitively close the gallery ‘Of Memory and Recovery of Peace’, located in the historic center of the city.”

Due to the fact that there was not quorum to continue with the legislative session, the PAN instead provided the motion to the news media.

At the start of this month, in the middle of the electoral process and with the prohibition of narcocorridos in the municipality of Chihuahua, the governor inaugurated the exhibition—without consulting or obtaining the consent of the families of the victims. Also present at the opening were other authorities such as attorney general Jorge Enrique González Nicolás.

The crude images are shown in a building originally intended to serve as a gazebo during the government of José Reyes Baeza Terrazas, but the space was abandoned during his administration.

On around four floors visitors, from children to adults, can stroll and “admire” the images documenting violence during the governments of Felipe Calderón [President, 2006-20012] and Reyes Baeza [Governor of Chihuahua, 2004-2010].

The purpose of the exhibition, according to Duarte, is to ensure that the events of the past are not forgotten and never repeated, as though violence has been absent during his administration.

The tour begins with a documentary film that details the aims of the exhibition and there is a timeline at the entrance that, in line with this official vision, explains the escalation of violence beginning in 2006 and the gradual “recovery of peace” under Duarte’s government.

Nevertheless, the exhibition had to close for a day to change some images, since one visitor went into shock upon seeing the photos of an execution; she immediately pulled the image down and demanded that it be removed. Like her, other victims have expressed their disagreement with the display.

Congressman Rogelio Loya points out that the photographs “re-victimize” the family members and those who suffered during “the war that arose, and continues to arise in the state, which is why the exposition is inappropriate, because it tries to show the end of a crisis that is ongoing in Chihuahua, and more than remembering victims, it evokes horror and plants terror and outrage in the population.

“It is lamentable that the relatives who once had to witness these violent events through the media, still have to bear such an exhibition, and one that does nothing to benefit society; on the contrary, it is an attack on the human rights of the victims and those who suffered.”

Patricia Mayorga reports from Chihuahua for Proceso magazine. This article was published online on May 22, 2015 and is available at: http://www.proceso.com.mx/?p=405009