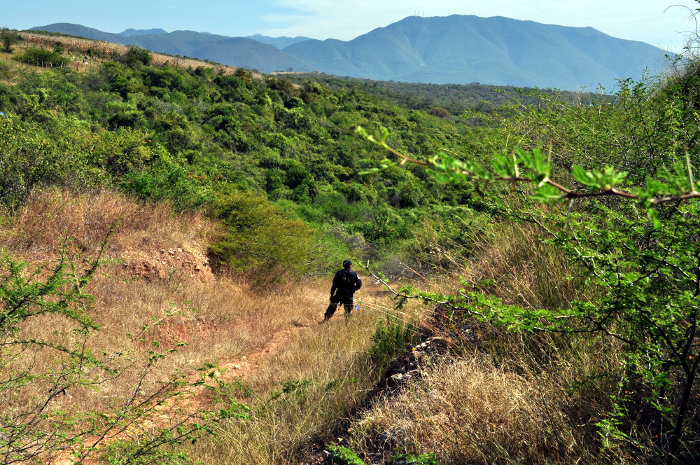 ~ This essay was originally published on the blog Periodistas con Ayotzinapa on October 4, 2014 ~ The articles on this blog, a project of Periodistas de a pie, represent the response of a community of journalists to the events of September 26, 2014 when 43 students from the Ayotzinapa teachers college were disappeared in the city of Iguala, Guerrero.

Saturday, October 4, 2014. A week and a day after the night of Iguala, the dance of graves and corpses began. The neighborhood of Pueblo Viejo, on the edges of Cerro Gordo, is a conglomeration of plots creeping up the hill, a tangle of bushes that turn green during the rainy season and withstand the brutal sun of the arid northern region of Guerrero. There are few houses, and its residents try not to notice what goes on at night. There, they said, they would have taken the 43 boys, made them dig graves without names, killed them, burned them, and buried them.

The authorities spoke of six graves, 29 bodies. A state policeman at the perimeter said, as something of a tip, that there was everything; new corpses, old corpses… Was that why they didn’t let the press in? Was that why the Marines and the Federal Police were ensuring that not even one journalist entered? That’s what the waiting reporters pondered. The local press remembered that in the past they had always been permitted access when there were discoveries of clandestine graves. And if the world had been horrified by the existence of a territory planted with death, here it wasn’t unusual: the newspaper El Sur did a count of discoveries from September, 2012 to September 2014, that is, during the administration of José Luis Abarca as mayor [of Iguala]. Abarca is now being held for the case of Ayotzinapa.

In those two years, there were at least 8 public discoveries in the region of Iguala-Cocula-Taxco. How many bodies were found is not certain, since in one case the press was never able to learn the number, but from the rest of the incidents the tally is more than 60.

That was before Ayotzinapa.

After Ayotzinapa, the 29 bodies of October 4 were added to the tally, bodies that, it would be learned a few days later, did not belong to the students. (They remained disappeared)

Almost immediately other family members came to help. Family members of others who had disappeared, those who had been taken one by one: the father of a son who had gone to Iguala for some reason and never returned. The relatives of a family that took the Paso de Morelos highway and vanished forever. They spoke of between 200 and 300 cases, the majority occurring in the zone around Iguala.

Each group searched. Just like that. Fathers and mothers walked the hills of Iguala, Cocula, Taxco. They find hills littered with empty cough syrup bottles. It is said that the kidnappers give them to their victims, because they get sick from so many days and nights out in the open. They have found pits, some with remains, others with only clothes, shoes, ballet skirts for little girls, backpacks, sneakers, toys.

It would be naïve to think that this only occurs in Iguala and its surroundings. That only there was the perfect marriage between crime and government. What country is this, where the boundaries between State and crime are so blurry that it is not possible to know what happened; if criminality infiltrated the government, or if government transformed, bit by bit, into crime.

Lydiette Carrión is a freelance reporter. This essay was originally published on the blog Periodistas con Ayotzinapa, and is available online here: http://ayotzinapa.periodistasdeapie.org.mx/blog/2014/10/04/cerros-sembrados-de-muerte/