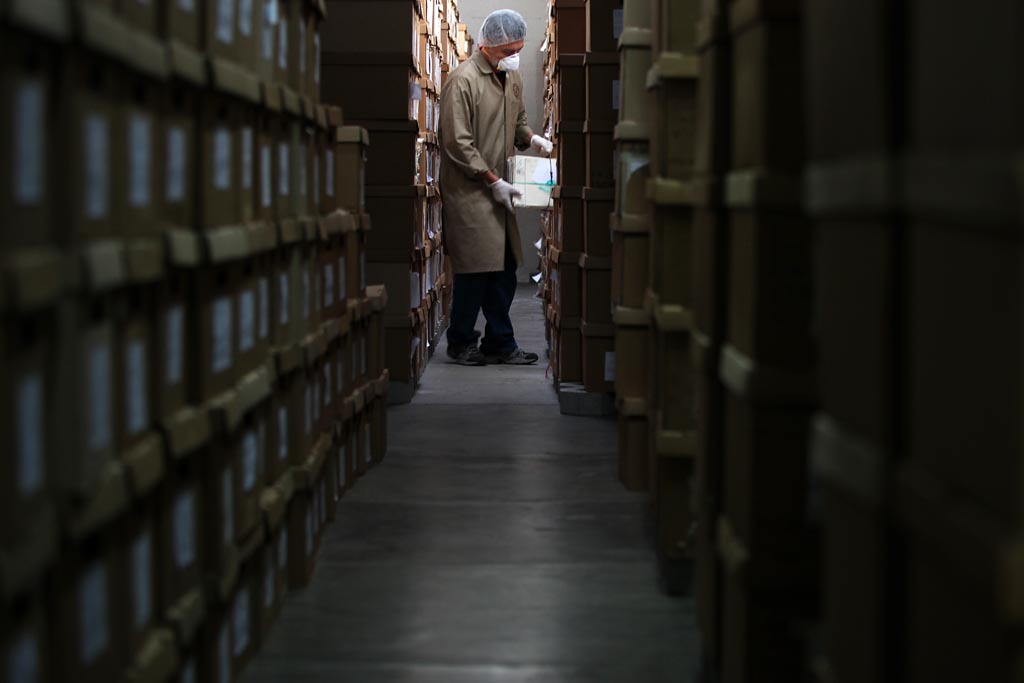 ~ This article was originally published by Nómada on December 5, 2014. It is part of an occasional series of translations about struggles over memory and truth telling in Latin America ~

The world’s second largest archive is Guatemala’s National Police Archive (AHPN). It houses around 80 million documents. In its safekeeping is the memory of the state’s relationship with Guatemalans over a century. It has very dark chapters. After five years of financing under a United Nations’ program, for the next five years that UN support will be cut in half, from US$7 million to US$3.5 million. Otto Pérez Molina’s Partido Patria (PP) government was the first to provide the AHPN with its own funds of 100,000 Quetzals per year, about 0.02% of the total budget. The nation’s memory is at the mercy of other countries taxpayers. The meeting was cordial. As cordial as a meeting could be where one party was asking for funding and the other said that it would see what it could do.

At the beginning of November, Gustavo Meoño, the Archive’s coordinator met with the Minister of Culture, Dwight Pezzarossi. He wanted to meet Pezzarossi since he had only been in charge for two months and still they did not know each other. They come from different life trajectories. Meoño was a guerrilla and led the Fundación Menchú (The Menchú Foundation). Pezzarossi was a footballer and the President’s Commissioner for Sport. The archive was discovered by accident in July 2005, and since coming to power in 2012 Otto Pérez Molina’s government has been the first to provide it with a budget: Quetzals (Q) 100,000 per year since 2013. That’s about US$13,000.

This symbolic but insufficient sum was the subject of the conversation. Meoño asked for “the beginning of an increase” in the state’s contribution. The Minister said that he would see about it for the next budget and talked of soon visiting the Archive. “It keeps it running, but barely,” Pezzarossi admitted a month after the meeting, and that he still hadn’t managed a visit. At the time he was worried about the budget cuts to aspects of his brief: from Q472 millions to Q423 millions “We are evaluating things,” the Minister says. Before the month is out, he will have a meeting and he hopes to obtain greater funding for the Archive and also for the Conservatory, art schools, archaeological sites, among others. “There are many things and we have to see what we are going to do given the budget cuts.”

Guatemala’s Police Archive, with its 80 million documents (of which 17 million have been digitized) is the largest of its kind in Latin America. Eight kilometers of paper running in linear meters. The largest in the world is in Berlin and comes from the Stasi, the community police, with 111 kilometers. Since its discovery in 2005 until 2009, the Archive was in the hands of the Human Rights Prosecutor (PDH). That year the Archive passed from the care of the Interior Ministry to become a part of the General Central American Archive belonging to the Ministry of Culture. In practical terms, though, little changed: today the Archive belongs to that part of the state but its survival depends on international cooperation.

The meeting with Pezzarossi was especially important because Meoño was accompanied by Elizabeth Turner, director of Accompaniment for the Transition to Justice (PAJUST) of the United Nations in Guatemala. Since 2010, PAJUST has been the chief source of the Archive’s financing. It also supports seven state bodies and about fifty associations. Turner reminded the minister of a pending matter that could be definitive for the Archive’s future and that was proposed by his predecessor: the plan to create a specific unit with its own budget, including the AHPN and which already existed in draft form for his approval. Although Turner confirmed that the Minister was receptive, one day later in conversation with Nómada, Pezzarossi did not mention the plan’s draft. “At the meeting we agreed to continued collaboration.”

The PAJUST program was going to finance the Archive until December 31, 2014 with contributions of US$7 million from Denmark, Holland and Sweden. But that’s not what happened. Denmark and Holland demurred on providing funds. Also bowing out were the regional governments of Cataluña and the Basque Country, weakened by the crisis in Spain. Just Sweden remained. The second PAJUST, beginning in April 2015, will provide the Archive with US$3.5 million. “The context is one of an international crisis, with reduced financing, but confirmed for the next five years. That’s the minimum so the Archive does not disappear,” reflects Meoño, in a small meeting hall inside the Archive. The only decoration is the hospital-green walls. The Archive is located in the place for old police junk in Zone 6. It shares a block with the Police Academy and the Military Veterans’ Association.

The Archive serves as repository for all the documents of the former National Police (Policía Nacional), operating from 1881 to 1997, and which the 1990s’ Peace Accords dissolved. It has focused on digitalizing all of the documents related to the darkest days of the armed conflict: from 1976 to 1986. The value of the Archive is in the police index cards. These allow researchers to shed light on forced disappearances. Among those cases it’s possible to find out what happened with student leader Oliverio Castañeda or Manuel Colom Argueta, the social democratic mayor, respectively murdered in 1978 and 1979. Guatemala holds the dubious record of being the country with most disappeared people per capita in the continent during the twentieth century: 45,000.

Archive Staff Reduction
On November 27, 2014, around midday in the dining room, Meoño brought together the 107 employees of the Archive. (Another seventeen employees work in the Central American Archive in the National Library.) Three days earlier Meoño had told the workers that the funds weren’t what they needed. His talk was to confirm that half of them would cease after December 31, 2014, as per the annual contracts.

The meeting lasted 15 minutes and there was no opportunity to respond. Afterwards, some employees received a document thanking them for their services and others received a document asking them to continue in 2015. After that day, now only 65 people work in the Archive. “There’s an element of commitment among those who keep on coming during December,” Meoño says. Some employees complained on social media that the coordinator favored those who were staying on, complaining that they had been fired. Meoño responded saying that it wasn’t a firing because they were on temporary contracts.

Meanwhile, Meoño is waiting for help from German institutions and Guatemalan businessmen. And if there is not enough money? From January 2015 the Archive will slow down digitization of all the documents from 1871 to 1975, and its staff’s ability to respond to citizens and researchers will be reduced.

Some states dedicate funds for their society’s historical memory, especially those that have episodes of social extermination. Like the Jews in Germany or Blacks in South Africa. Or Chile, recently, with a museum about Pinochet’s dictatorship. In Guatemala, however, there is still a minority with a lot of power that denies the past (a majority believes there was a genocide) so it seems like an uphill battle.

“It’s common in politics for the state to undermine its archival heritage. Everything to do with culture and with memory holds no priority in the government’s plans,” Meoño laments. Minister Pezzarossi unconvincingly says that the Archive could become its own state organization: “We can’t say if we are going to be able to provide more funds for 2015. But the Archive is important and it must be protected.” He believes that the AHPN must be saved. “And if it can’t be done using the state, businesses or international support will step in,” he adds, returning to the question which started the interview.

The Discomfort of Historical Memory
Meoño imagines a state Archive. In the medium term. Some day. It is a Titanic task in a state that does not have any type of history in scholarly thought, and that has never published a book about its own national history.

It’s 2015 and this year there are elections. They won’t produce a significant change in the relationship between the state and the Archive. “Historical memory is a matter that makes the government uncomfortable,” says Nery Rodenas from the Guatemalan Archbishop’s Human Rights Office (ODHA), a plaintiff in the Archbishop Gerardi murder case, and who rues the lack of history books in primary and secondary school. “It’s not for them because they see how things might go against President Otto Pérez Molina,” Rodenas adds, referring to the hard years of war when Guatemala’s current president was an Army major in Nebaj, a center of the state’s genocidal campaign.

Rodenas was hoping for an independent archive but with state support. Edgar Gutiérrez, former Foreign Minister and Director of the Institute for the Analysis of National Problems at the Universidad de San Carlos agrees that it must be financed by the state. “But the Government neither has the only nor the last word in the matter of the Archive’s finances. In general the groups in power do not feel comfortable with the history of the conflict since there is a feeling of guilt that has not been admitted.”

There is evidence of what value memory holds for the PP Government in the drastic cuts to the budget of the Peace Ministry (SEPAZ), an entity that coordinates policies stemming from the Peace Accords, according to Ricardo Barrientos, director of the Central American Institute for Fiscal Studies. During the negotiation the presidency proposed Q333 millions for SEPAZ. But the final budget was reduced to Q201 millions.

In 2015 things won’t change. The biggest party in Congress and which is in the lead in the polls, is against the Archive. Leonardo Camey, the deputy of the Líder Party, wanted to give a personal opinion. He says it is better not to institutionalize it. “It would create more bureaucracy. It isn’t necessary to dedicate great quantities of resources for the Archive’s operation.”

Meoño is looking for temporary solutions: to secure greater state funding, more international assistance. Or, its own resources through the System of National Archives’ Law (shelved since 2011 but which earned support this week from the PP’s Oliverio García Rodas and Roberto Alejos of the Todos Party). All that and support from private initiatives “even though that might seem unusual for certain groups in the country.”

TBI Translator Patrick Timmons (@patricktimmons) is a freelance journalist, independent human rights investigator, and adjunct professor of Political Science and faculty affiliate at the Center for Inter-American and Border Studies at the University of Texas at El Paso.