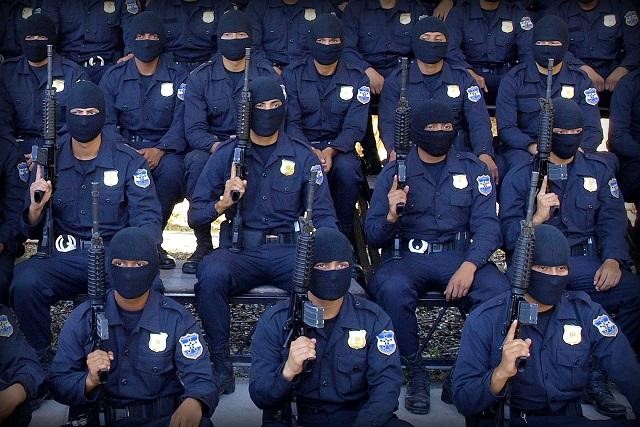 Year after year, the Policía National Civil (National Civil Police of El Salvador) is the state institution with the most complaints lodged against it at the Office of the Prosecutor for the Defense of Human Rights for its agents’ abuse of citizens. In the ‘Nineties, when the phenomenon of the Maras developed, the at the time young policing institution, created by the Peace Accords – failed to live up to its promise, like many other social actors. On 20 December 1998, Dr. Manuel Arturo Hernández was driving steadily along the Panamerican Highway. His friend, José Giovanny Cruz sat beside him in the passenger’s seat. When they passed the Lolotique turn off, ten minutes from San Miguel, the car was viciously sprayed with bullets from a machine gun. The vehicle ended up with twenty-five holes. In the lottery of bullets, the doctor and his friend were not lethally wounded, taking fire on their hands and forearms. The firearms used were standard issue to the Policía Nacional Civil. Those who shot them were agents of the 121 emergency services. They had heard a notice on the radio about a vehicle with certain markings flying down the Panamerican highway. The police fired on their own accord because of an assumption. Or because the car seemed similar to the one they heard about on the radio. Or maybe because the car disobeyed a stop sign. When the police came closer, to check what they had sprayed with bullets, they fled the scene, just like any other delinquent.

The story sounds farfetched maybe dumb. But no, it sketches precisely the spirit of the police institution at the end of the nineties, the dominant mood among the people who had constitutional responsibilities. These obligations come from Article 159 of the Constitution. The articles states: “to guarantee order, security and public tranquility, as well as collaborate on criminal investigative procedures, and always adhering to the law and strict respect for human rights.” It says: strict respect for human rights.

To do the Policía Nacional Civil justice, it would be unjust to attribute exclusive responsibility to them for the grotesque rule of law in El Salvador at the end of the ‘Nineties. The public prosecutor, the judiciary, the executive, the legislature… the whole system leaked. The machine-gunning of the doctor and his friend, in fact, ended in the courts because they pressed a complaint about it. One month later, on the 23 January, six of the officers who shot and abandoned the wounded men sat before the head of the Justice of the Peace in Lolotique, Rosa Belis Cruz. Another two police officers involved did not attend because they fled when they found out a warrant had been issued for their arrests. The charges were attempted murder and the judge, in a suspicious moment of generosity, did not even order provisional detention during the charging phase of the case. She ordered substitute measures, like staying in the country or not approaching the people they had shot. But she did allow them to keep dressing as police officers and their return to the streets.

“When I got to San Miguel the first thing I did was put an end to the 35 imprisoned police officers,” says Commissioner Julián Belloso –, “because I have a thesis: if we don’t clean ourselves, on the inside, what the hell are we doing cleaning outside?” Commisioner Julián Belloso headed the local office in Lolotique between 1995 and 1999. He saw it all to the point where he dispelled the memory of the machine-gunning by his subordinates at the Lolotique turn off. “Right, San Miguel was rough… there were even hit men in the PNC,” he says.

In the National Civil Police there were hit men and thieves and torturers and gangsters and their collaborators. “The 18 [the Barrio del 18, a gang] has always had police officers, so have the Mara,” notes Gustavo Adolfo Para Morales pointing at El Directo, the Mara Salvatrucha gangster who dominated headlines at the end of the ‘Nineties for being involved in seventeen murders when he was seventeen years old.

From somebody dressed in a blue uniform, a Mara could receive a fatal blow, or be assaulted, or taken and abandoned in front of his enemy’s destroyer. But not everything was bad: those in uniform also sold weapons so they could expand their clique or let themselves be bribed so drugs could be trafficked without seizures. The relation between the gangs and those who take the oath, the jura, has always been complex, tense and changeable. In El Salvador some say, with irony, that there are three top gangs: the two lettters, the MS for Mara Salvatrucha; the two numbers, for Barrio 18; and the three letters, for the PNC, the Policía Nacional Civil.

With some minor adjustments, this text is a small fragment of a book of crónicas that deals with the complexity of the Mara phenomenon and that El Faro is set to publish in 2015.

Journalist Roberto Valencia (follow him on Twitter @cguanacas) reports for Sala Negra of the online news portal El Faro, an investigative journalism outlet based in El Salvador. The original story was published under the title, “La Jura Noventera,” and may be found at: http://www.salanegra.elfaro.net/es/201411/bitacora/16217/La-%E2%80%98jura%E2%80%99-noventera.htm.