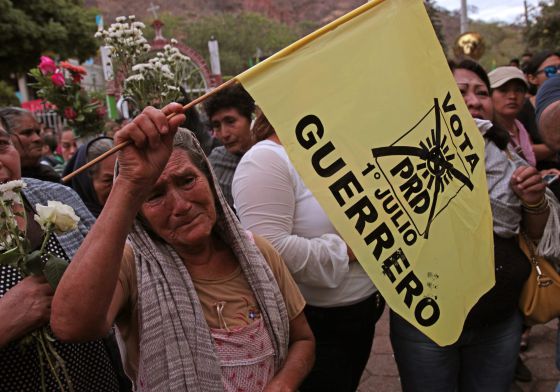 Ahuacuotzingo is a small mountain town in the state of Guerrero. This means at least three things. One, that it is stuck right in the heart of the best opium fields of America; two, that the area is controlled by the drug trade, and three, that practicing politics there is risking your life. Aidé Nava González, 41 years old, the last candidate of the PRD (the leftist party) in Ahuacuotzingo, and her family, are proof of that. Nava’s head was found Tuesday in a patch of dirt. At its side, in a white cloth, was a message in red letters: “This will happen to all the fucking opportunists and politicians who don’t want to fall in line. Signed: Pure Red ZNS”. The body, with inexplicable modesty, had been covered with a blanket. The autopsy determined that the candidate, a widow known for her courage, had been tortured with chilling viciousness and that, while still alive, they had slit her throat. Possibly, before dying, she remembered what had happened on June 28, 2014.

That day, Francisco Quiñónez Ramírez, 42 years old, mayor of Ahuacuotzingo for the PRD between 2009 and 2012, was driving a red Ford Lobo truck. He was carrying supplies for his birthday party. Quiñónez was popular and deeply committed to his town. His intention was to run again in the 2015 elections. Near the turnoff for Tierras Prietas, he was ambushed. The gangsters took him from the car, and shot him to death. All this occurred in front of his companion and wife, Aidé.

It was the second time that tragedy struck the woman. On October 11, 2012, the couple’s son, Francisco, 15 years old, was kidnapped. The last time he was seen was in a poor quality video uploaded to YouTube in which the boy begged his parents to pay 17,000 dollars in ransom. To this day he remains in the limbo of the disappeared, the no-man’s land inhabited in Mexico by 23,000 people. “In my opinion, he is dead, but if he’s alive, now he has neither a father nor a mother to pay the ransom. That’s how it is. They kill you and nobody investigates or knows anything about it,” says Pedro Nava, Aidé’s cousin and the leader of an NGO in the area. He knew her well, and admired her: “Aidé decided to take her husband’s place when he was killed. We asked her if she was afraid, and she said yes, but that she preferred to keep moving forward.”

That is politics in Guerrero. In the last decade, 60 members of the PRD have been killed in this volcanic state, the most violent in Mexico. Leaders and members of the PRI and PAN have also fallen. At the doors of their houses, while breakfasting in a hotel, on the highway… The place doesn’t matter. The arm of narcoterror long ago reached politics. The case of Iguala [the 43 disappeared students from Ayotzinapa] revealed to the world its immense barbarity. The death of Aidé Nava, quotidian and lost in the mountains, is another reminder.

Federal authorities have named three states—Guerrero, Michoacán, and Tamaulipas—as high-risk zones for the local and state elections this June. In many municipalities in those states, the candidates live on the edge of the abyss. Aidé Nava (officially a pre-candidate) was one of them. The PRD has attributed her murder to Los Rojos, a savage cartel that for several years has been engaged in a fight to the death with the Guerreros Unidos, the criminal organization responsible for the tragedy in Iguala. The signal they left on the side of the highway is crystal clear: hell awaits those who do not submit to their designs. The territory is theirs.

Although it is not yet official, Ribelín Calzarubias is most probably the new PRD candidate in Ahuacuotzingo. He lacks protection and does not trust the authorities. “Here, everything goes unpunished, as you know”, he says bluntly. Calzarubias knew the couple, and their kidnapped son. And the three surviving brothers: “Imagine their pain, first a brother, then a father, and now the mother.”

–“Aren’t you afraid they will kill you?”
–“Look, someone has to stand up. We can’t go backwards.”

This Thursday, Aidé Nava González was buried in her hometown of Pochutla. Hundreds of people joined the funeral procession. Her oldest daughter, Vanesa, stood before a coffin covered in flowers and begged Mexico not to forget her parents’ struggle. Afterwards, she left Ahuacuotzingo for good.