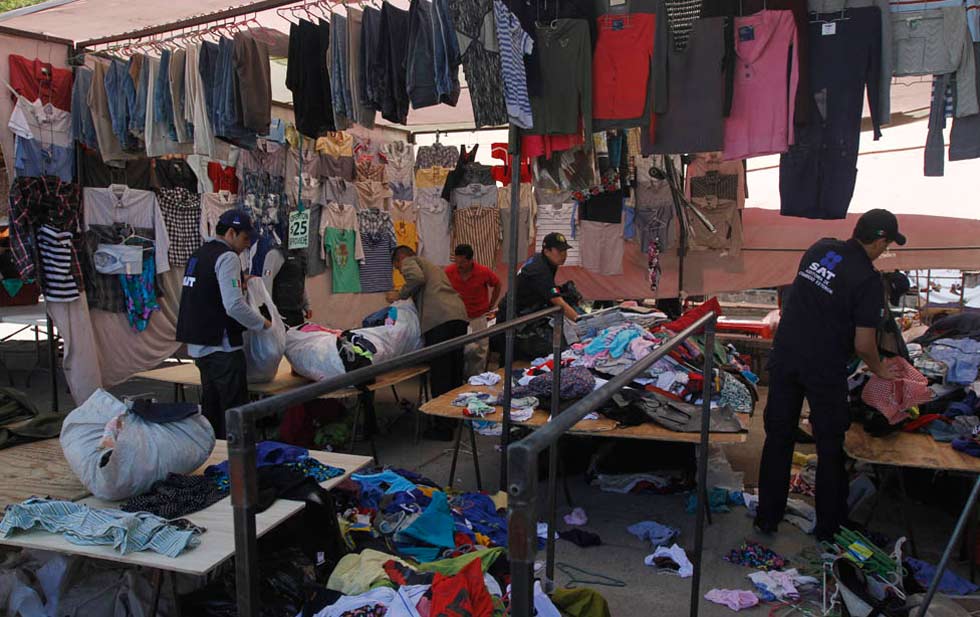 Mexico City- The used clothing industry rakes in millions of pesos for U.S. wholesalers, Mexican suppliers, street market unions, sellers, and re-sellers who have to fork it over to organized crime.

In the Fray Servando street market near the Pino Suárez mall in Mexico City some vendors confirm that on Fridays when the bundles of clothes from the U.S.-Mexico border arrive they can earn upwards of 30,000 pesos (US$2,300).

There are at least 260 stalls in the street market.

The Type 2 used clothing bundle contains items with imperfections – like stains – and comes unfolded, much of the time smelling damp. For these reasons the bundle’s value is between 7,000 and 9,000 pesos (US$500 to US$900), depending on its place of origin.

The clothes classified as Type 3 are mostly for children, oversize items for men and women, out-of-fashion pants, soiled fabrics, and unseasonal garments that won’t fit in the first two bundles. Per item the cost is between 5 and 20 pesos (between fifty US cents and US$1.50).

According to stallholders, the National Informal Business Front (FNCI) has cornered the market. This group has an Internet page stating that it supported Enrique Peña Nieto’s 2012 presidential campaign.

Vendors confirmed that they pay the FNCI 100 pesos per day (almost US$8.00) to sell products in this particular collection.

A Night Street Market
On account of its location, every week the San Martín Texmelucan, Puebla street market turns into a strategic point for the new and used clothing trade in the country’s southeast.

Thanks to its proximity to these routes, resellers come from Chiapas, Oaxaca, Puebla and Tlaxcala to purchase products to sell in their states.

The sixty or so wholesalers who arrive in Ford Lobo trucks and Nissan Sentras operate the street market.

They set up the stalls at four o’clock in the afternoon on Monday and break them down at noon on Tuesday. “The economy is weak and sometimes there’s not enough to buy new clothes which don’t last as long. These items, the used clothing, last a little longer and they are cheaper,” says Defina Cerón, a buyer at the San Martín Texmelucan market.

“You just have to give it a quick wash and it’s ready to wear,” she says.

Every week, Mabel Juárez goes to the street market to buy used clothing and resells it in San Miguel Xoxtla Township in Puebla. She buys pieces for 30 to 40 pesos (US$2.50 and US$3) and sells them in a small shop for around 60 to 80 pesos (US$5 to US$6).

“I think that we make a fifty percent profit. We buy small amounts of clothing. The people who come in the morning buy a lot,” she says.

Organized Crime
Efrén Sandoval, a researcher for CIESAS Northeast based in Nuevo León, argues that organized crime began to insert itself into the used clothing trade between 2009 and 2010.

His research included fieldwork on the Tamaulipas-Texas border and he found that the biggest wholesalers are in Hidalgo, Laredo, and McAllen. Those are the places where the Mexican traders buy their clothes.

In some cases, traders buy clothes directly from wholesalers, but mostly it is the truckers or freighters buying the clothes, then cross the border heading towards the south, and resell the clothes.

According to Sandoval, Mexican cartels force freighters to work with them. They also demand fees from the customs workers for each cargo that they let pass and make the traders use their supplier.

“Some traders have told me that they believe the business will continue to be controlled by a group or groups of organized criminals,” says the PhD in anthropology.

Journalist Arcelia Maya was born in Miahuatlán, Oaxaca. Follow her on Twitter @arceliamaya. This Agencia Reforma story was reprinted in El Diario de Juárez on 26 July 2014 and is available in the original Spanish, here: http://diario.mx/Nacional/2014-07-26_e9721e50/controlan-carteles-trafico-de-pacas-de-ropa-usada-desde-eu/.

Translator Patrick Timmons is a human rights investigator and journalist. He edits the Mexican Journalism Translation Project (MxJTP), a quality selection of Spanish-language journalism about Latin America rendered into English. Follow him on Twitter @patricktimmons.