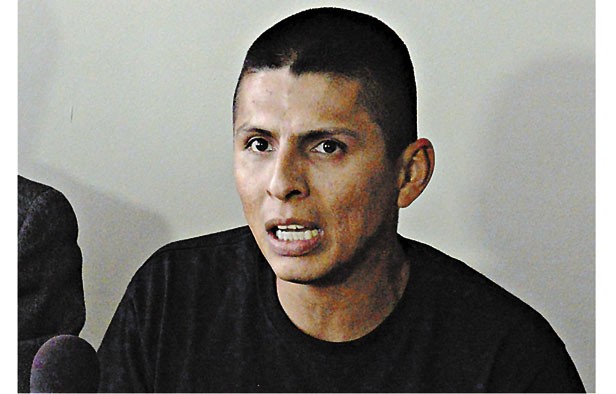 ~ This article was originally published by El Diario de El Paso on February 5, 2015 ~ After a four-year long wait, an immigration judge granted political asylum to Juan Manuel Frayre Escobedo, son of the late activist Marisela Escobedo Ortiz who was murdered outside the Chihuahua statehouse while she mounted a protest in Plaza Hidalgo. She was demanding justice for the murder of her daughter Ruby who was murdered in 2008 in Ciudad Juárez.

“I feel happier and calmer because my legal situation in this country has been resolved. It’s been a long wait for the ruling from the courts. With the law in this country one never knows until they give you the response. In the meantime you are on the backburner,” he said by phone interview from San Antonio, Texas where he currently lives.

He explained that he received notification after ringing the contact numbers for Immigration and Customs Enforcement (ICE) a couple of days ago.

“I hadn’t talked to anybody for several weeks. I checked again recently and they replied that my case had been resolved in my favor and that the U.S. government granted me asylum in October 2012.”

The thirty-six-page document contains the testimony and evidence of the applicant. Immigration judge Craig A. Harlow reviewed the application. He decided that there was sufficient evidence to grant asylum and the Justice Department signed off on the asylum request.

He stated that he is now hoping that his brother Alejandro and his uncles Ricardo and Héctor Escobedo will have the same luck with their applications at the Court.

“Right now I have to keep on supporting my family and the group Mexicans in Exile (Mexicanos en Exilio), an organization that supported me, so as to help the new ones that are arriving and do not have resources or legal assistance,” he added after emphasizing that he and many others do not have the option of returning to their country.

Concerning his mother’s case and her murder on 16 December 2010, he said that the case is still “up in the air”, suspended, “nothing seems certain and the Mexican government’s position is still the same. A government that does not tell the truth and that doesn’t want to find a solution.”

He added that the violence in Mexico is not going to stop so long as the government is in cahoots with groups of criminals.

He stated that the threats would continue against people who protest injustice in situations similar to the ones that confronted his family.

Although the government gives out “happy” statistics and insures that things are changing, it will continue attacking the people. “There is going to be more persecution. The threats are going to continue and it won’t stop. It just won’t stop,” he said in a worried tone.

At this point – he continued – people are still living in fear. People would rather flee the country to save their lives and those of their family members, he emphasized.

As an example, he mentioned the recent case of journalist Moisés Villeda Rodríguez who, just like him, fled to El Paso on 4 January 2015 in fear of his life.

In his message to victims of violence in his home country, Mexico, he demanded that they continue denouncing abuses on the part of Mexican officials.

Lawyer Carlos Spector followed Frayre Escobedo’s case. He is satisfied by the Court’s action and stated that he will continue working to defend and protect his clients who flee Mexico as they confront its violence.

“The next step is to lodge a complaint with the Mexican Consulate in El Paso using the victims rights law,” Spector said.