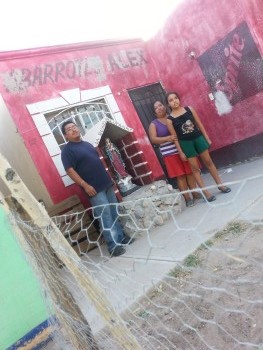 The opening of seafood restaurants in Ciudad Juárez, Chihuahua in the early 2000s heralded the formation of a thousands-strong community of Veracruzanos in that border city. Then came the sale of Sinaloa-style chicken because El Chapo Guzmán’s hit men had arrived. The “war” was about to begin.

“We didn’t go out in the street. Everybody stayed in his or her home. That’s why nothing happened to my family, or at least it didn’t touch us,” says Tomás Amaya Flores, one of among tens of thousands of migrants from Veracruz, a state on Mexico’s Gulf Coast.

At the time a dispute surged between the Juárez and Sinaloan cartels, pursued by President Felipe Calderón deploying the army to the border city. The world watched Juárez as each day the atrocities mounted.

Four years later the government of Veracruz wanted to “repatriate” the migrants, and although at first there was take up, most decided to return to Juárez because in their native state the only news was of killings and more killings.

“Many people dropped everything in Juárez, left their houses, work, everything. And it was bad for them in Veracruz, too, so within a couple of years they were back. Many people sold all they had at terrible prices and when they returned to Juárez they found their house had been destroyed,” says Tomás Anaya. Enrique Gómez Rosaldo, one of these “repatriated” Veracruzanos, is still convalescing after being shot three times in the street. From a wooden house with a sand floor in the El Vergel neighborhood, one of Veracruz’s poorest, he tells of his 2011 shooting in Juárez.

“I was going to do some shopping when a car pulled up and began shooting at me, with no warning. I saw two guys with assault rifles. The investigators told me they were Kalashnikovs. They shot me in the hand, the shoulder and the neck. Three shots in all hit me.

They took me to the hospital and dealt with me there. I was in hospital for twenty days. I decided to remove myself from there because of how bad it is. I decided to come back to Veracruz.

I thought about my grandchildren. I cried, “No! I had to leave my grandkids. But I saved myself thanks to God because it was a miracle. There are times when they return to kill you. But God doesn’t want me with him yet.”

María del Socorro Velázquez argues that in Mexico there is no recognition of displacement caused by violence or concerns about safety.

“Since news has started to come out about the violence and drug murders going down many people have gone back [to Ciudad Juárez]. In Veracruz, there’s been an upsurge in murders. Just look at how bad it is going!” says the expert.

Those who study this phenomenon don’t have a way to count how many people are returning to Ciudad Juárez. That information will become available through the Instituto Nacional de Estadistica, Geografía e Información (INEGI) when Mexico conducts its national census in 2015. The Chimera of Leading a Life with Dignity

The exodus began in the 1990s, streaming out of their communities, ranches, the cities. Attracted by the news circulating through the houses of job offers, many were bewitched by the dream of escaping from poverty, and ended up 2,000 kilometers away from Veracruz in the middle of the Chihuahuan desert.

There is no official statistic. But academics calculate that figure reached up to 40,000 in the Riveras del Bravo neighborhood, before the spike in violence — the population could still number around 25,000.

Héctor Murguía, Juárez’s former mayor, said that in 2012 there were a total of 121,000 Veracruzanos living in the border city.

The society in Juárez did not bother to notice them. They were just manual labor for the factories. But at the turn of the century seafood and chicken restaurants started opening up that were more to the taste of the Veracruzanos rather than the drug traffickers.

That’s what Víctor Manuel Hernández Márquez, the director of the Social Science doctoral program at the UACJ, says: “In 2000 the Veracruz population became more visible in the images associated with Juárez.” The seafood that had been so expensive before became a type of fast food with an abundance of outlets in the city’s downtown. That’s where the Veracruzanos, nicknamed Juarochos (a play on words combining Juárez with jarocho, a slang name to refer to people from Veracruz) go when the factories pay wages every Thursday.

Ciudad Juárez has gone through tough times since then. The “war” declared against drug trafficking increased prostitution in the city when federal forces arrived, provoked thousands of murders, chance shootouts in the bar districts, bomb threats, more and more women killed with pink crosses painted on the walls throughout the city as a way to remember them.

And the Veracruzanos are still there in Juárez – in spite of the failed repatriation program of 2011 – lining up at cash machines in Juárez Avenue, near to where the gay bar the Noa Noa, immortalized in Juan Gabriel’s famous song of the same name, burned down and two or three blocks from the international bridges. The Veracruzanos go into the bars during daytime, still wearing their factory identity cards.

Beside a dance floor, the women try to save their makeup that they put on earlier before coming to work, thinking that they were going to be able to rake some money in dancing before night falls. Their coats spill from their bags because they don’t fit inside.

In the bar El Sinaloense, with its odor of cigarettes and cleaning products, the group of men drink and watch. They don’t smile. They don’t ask the women to dance. They aren’t kind to them. And the women dance better alone.

Surviving instead of Living

If Veracruzanos decide to take the bus for the thirty-hour journey it takes to reach Ciudad Juárez, an arrival in Colonia Azteca awaits them. The neighborhood is near the industrial parks where the factories are located.

It’s a place with desolate views where drug trafficking runs deep. There’s nobody in the streets and there are no trees. It’s a place that screams you are here to survive, not to live. Before the dispute between the drug trafficking cartels, Veracruzanos arrived along with migrants from other states to work in the emerging maquila industry. That’s when the first stage of the Riveras del Bravo neighborhood was built. Now the neighborhood has nine sections of social housing up against the river that marks the border with the United States.

That’s where about 40,000 people went to live, according to the UACJ researcher Luis Alfonso Aguirre Quiñonez. He completed his doctorate in Social Sciences researching Veracruzanos in Ciudad Juárez. He centered his fieldwork on the large number of destroyed one-bedroom houses accommodating up to two complete families.

It’s a good vantage point to survey the consequences of the wave of violence – and the resulting unemployment – in this city. Around forty percent of the houses are abandoned.

In this neighborhood, known now as Riveracruz, Andrés Mixtega from San Andrés Tuxtla says that living in an overcrowded, destroyed house in Riveras del Bravo and earning 700 pesos a week shut up in a factory is better then earning half that back on his smallholding in Veracruz “doing whatever.”

For these people, the word “return” means returning to Ciudad Juárez not going back to Veracruz.

Tomás Amaya just has a primary education and eleven years working in the maquila. That’s where he met his wife who comes from Juan Rodríguez Clara in Veracruz. They have two daughters. They work in the same plant and they coordinate their shifts so that one can hand over their daughters to the other and go to work. They barely see each other. When things are going well each one earns 800 pesos a week and that’s enough to fill the larder, a luxury, they agree, that they never had in Veracruz.

Stories of crime spring from Riveracruz: of drug houses (picaderos, places to shoot up), of overcrowded families, of scarcity and of dead children, just like the one pictured in the mural Jarochito Fallecido (Dead Jarochito) painted in graffiti along with the inscription, “We are nothing to do everything.”

He loves it when Carmelita gets touchy because her chickens keep on dying. She doesn’t understand that they can’t stand the heat like the ones in the tropics, the ones in Veracruz.

He always likes it when he is going to Riveracruz because he falls victim to words with double meanings, the albures jarochos. Each house he visits, they invite him in, tell a thousand stories and offer him something to eat.

He remembers that once he saw a group of Veracruzanos in the mostly dry Rio Bravo carrying some ownerless ducks home with them and then, under the pretext of needing to feed themselves, they threw down some fishing lines in the border rivulet, just as if they were in their sea, the sea off Veracruz.

When the dusk of various hues falls in the Chihuahua desert, darkness draws in around the houses of the boisterous Veracruzanos.

It’s impossible to see the shields of the Red Sharks football team from Veracruz. Just the silhouette of a rough-built shack inside a small garden and the lights go out on the goalposts made from scrap wood.

On Carmelita’s patio the patches of seasoning herbs can’t be made out. Like the chickens, they can’t take the heat either. The following day, in just a few hours, a “pack” of Veracruzanos will leave early for work calling out to each other as they get in the special buses that take them to the factories.

“A Jarocho doesn’t give up here. They think we are good-for-nothings. Those of us who are good are good but the bad ones are scoundrels. We won’t let them humiliate us, though. They can be from Juárez but we’re from Veracruz,” exclaims Tomás in a Veracruz accent unchanged by border exposure.

Journalist Rodrigo Soberanes is based in Mexico. Follow him on Twitter @rodsantin. He is the author of “My Country, You are Watching Me Leave” for En El Camino of Periodistas de a Pie, an Open Society supported reporting project about migration. This article appeared under the title, “#Juarochos / Extranjeros en su país” available at: http://diario19.com/archivos/2443.