On November 7, the U.S. Court of Appeals for the Seventh Circuit reversed a 2011 decision allowing two Americans to recover damages from former Secretary of Defense Donald Rumsfeld for torture they endured at the hands of the American military in Iraq.  In Vance v. Rumsfeld , the court held that “a common-law right of action for damages should not be created” and that in any case Rumsfeld and other “remote superiors” were entitled to immunity for such conduct.

The court’s decision is in line with recent decisions out of the Fourth Circuit and the District of Columbia Circuit, although the ruling is said to go further (see a New York Times editorial here).  Importantly, the decision also marks a departure from the 41-year-old Supreme Court precedent in Bivens v. Six Unknown Federal Narcotics Agents, 403 U.S. 388 (1971).  In Bivens, the Court held that when federal agents inflict harm in violation of the Fourth Amendment, individuals suffering such harm may recover damages.

The dissent in Vance contended that the ruling confers “absolute civil immunity to the U.S. military for violations of civilian citizens’ constitutional rights” and “leave[s] citizens legally defenseless to serious abuse or worse by their own government.”  [REG] 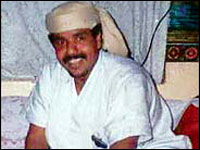 Salim Ahmed Hamdan, seen here in an undated photo handed out by his defense lawyers, is at the center of a case that could test the limits of presidential powers during wartime. Getty Images For audio excerpts of the oral arguments in the case, click here.  The Georgetown University Law Center links to the oral argument online as well (Hamdan’s counsel, by the way, is Georgetown Law Professor, Neal Katyal) [click here].  [Tip from SCOTUSblog]