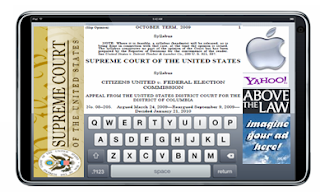 This morning, William Knott, a spokesman for the US Supreme Court, made a surprise announcement that the US Supreme Court will phase out releasing court opinions in PDF format and will begin releasing all Court materials to fit Apple’s new iPad format.  The multi-million dollar agreement between SCOTUS and Apple launches a new approach for the Court to push information to the public and at the same time generating much needed revenue to support the Federal Court System.  Knott justified the move by saying, “With the downturn in the economy, and the legislature’s refusal to adequately fund the Federal Courts, we’ve decided to look for additional funding through corporate sponsorships.”

Back in January, the Court handed down the Citizen United decision (Knott apologized that the decision is currently only available in the Court’s old PDF format), which ruled that corporations and labor unions could contribute to political campaigns.  Apparently, the Court has interpreted that decision not only for campaigns, but also for other governmental contributions, including itself.  “Hey, why should some schmoe congressman from New Jersey be able to take money from corporations or unions and the highest court in the land cannot?” asks William Knott.  “We’d be hypocrites if we said it was okay to contribute to politicians, and then tell those same corporations and unions that their 'free speech rights' end at the steps of this courthouse.”
For more, go to 3 Geeks & a Blog.  And remember what the date of this post is!