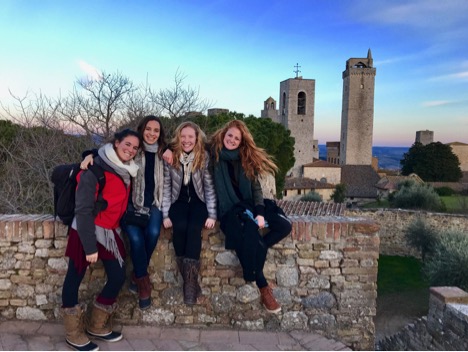 Intersession 2017 lasted exactly 35 days. Yet, as I look back on the countless impactful experiences, unique perspectives, and new friends it has provided me, it feels as though it lasted a lifetime. The trip I participated in (USD’s Second Year Experience in Florence, Italy) began in January, but I was able to spend time traveling Europe with my roommates beforehand. We started in Amsterdam and worked our way down to Florence over the course of a week or so, spending a few nights in places such as Zürich, Switzerland and Stuttgart, Germany. Although the experience of traveling abroad without the help of a travel agent or pre-determined schedule organized by an experienced professional was a stressful, exhausting, eye opening and completely rewarding part of my time in Europe, I’ve decided to describe my academic experience abroad as a student of International Business. My first and favorite meal in Florence

As a participant in the Second Year Experience, students are able to choose from a variety of different courses offered during the three-week long excursion to Florence. Each class is taught by a USD faculty member and students receive USD credit towards their core requirements or major/minor. In addition to attending class every day, we participated in a number of course-related trips, which included visits to local museums and monuments such as Michelangelo’s David and an interactive virtual reality art exhibit featuring the works of Gustav Klimt. We also had the opportunity to meet with the owner of Leonardo’s Leather Shop, a local store we partnered with to collect data for our final projects, which analyzed the statistical trends of the shop’s sales. Our schedule also included a number of free days on which we were permitted to explore Florence on our own or travel to other Italian cities and regions by train. The Colosseum looks just as incredible no matter how cold it is, but I’ve provided photographic proof that we nearly froze in Rome. On our second free day in Florence, we set out to walk from our hotel through the narrow, cobblestone streets in search of lunch. We took our usual path along the river towards the city center, but were stopped just before we arrived by a line of police cars blocking the road. Whistles were sounding and chants were being shouted in Italian. The policemen were casually standing around, smoking cigarettes and chatting by the edge of the square, keeping an eye on whatever was happening just around the corner. Upon seeing this we became less nervous about what we might find. I made my way through a thicket of parked bicycles and into the square, where an ocean of light blue and cherry red flags ebbed and flowed. I watched as the people who held them in the air wandered back and forth speaking to one another and trying to keep warm as the protesters funneled into a small side street towards the city center.

It took a moment to find someone in the crowd who spoke our language but, after a few minutes, the purpose of the protest was vaguely described to us in broken and heavily accented English. The middle-aged Italian man said that they were workers for a major textile companies. Their employers had promised them new contracts and when the time came to sign them, the companies backed out. They were advocating for workers rights and specifically for contracts with fairer wages. As we made our way towards our usual lunch spot alongside the protesters, we ran into Mateo, a graduate student whom we’d met at Florence University of the Arts. When I asked him what he knew about the demonstration he explained that employees from different textile and footwear companies across Italy had come together with the help of a number of different Italian labor unions to protest the non-renewal of contracts. He pointed out signs that different sections of the group were holding up, “For example, this group you can see is from Milan, and those over there are from Bologna. They have traveled here to protest together so their numbers are larger.” Upon rifling through some Florentine news sources, I discovered that there were a number of reasons why the protest took place in Florence. The union officials who helped to organize the event intended for the timing (it occurred on the same day as many of the Florence Fashion Week events) to encourage the consideration of the difference between those who are wearing and selling high-end Italian clothing, and those who make it. We could see the protest continue later that day in Florence, closer to the city center.

Poverty was not something I expected to see very much of when traveling to Europe. I assumed that, because we would be spending our time primarily in tourist-heavy areas, we would not see much exposure to this particular economic issue. This was not the case. Everywhere we went individuals could be seen selling trinkets in the plazas, outside of museums, and next to monuments. Others frequented the same areas and begged for money instead. I noticed that the large majority of these individuals were not native Italians. Many of the people I spoke to were refugees from Senegal, Africa. Some of the people had lived in Italy for many years and selling these knick-knacks and souvenirs had been their only source of income, while others had just recently arrived and could barely speak Italian, much less English.

Based on articles found in domestic sources such as The Local Italy and foreign sources like The Wall Street Journal, Italian politicians are primarily concerned with both the current banking system and immigration. A series of bad loans has plagued Italian banks since the Global Financial Crisis in 2008 and they are still working toward recovery. In addition to a financial system that is constantly at risk, Italy has taken in a record number of refugees and asylum seekers over the past few years. According to the UN Refugee Agency, the number of unaccompanied minors fleeing their home countries and seeking asylum in Italy has doubled in the past year alone. Unstable banks, along with the recent influx of immigrants from Africa and the Middle East, has caused major political upheaval in Italy and Italians debate solutions to these issues most frequently. It seems that many of the same economic, political, and humanitarian issues are prominent topics for discussion in both cultures. I was surprised to discover that economic stability and the immigrant crisis are major issues that both Italians and Americans are concerned with. Some of the other aspects of Italian culture, however, were much different from those in the U.S.

One of the most prominent differences in culture that I noticed and felt the need to adjust to was the emphasis on time. I noticed in many instances that, for Italians, time is most definitely not of the essence. I felt as though I was being rude when I asked for the check after a meal in a local restaurant, or decided not to have wine or dessert. In the U.S., we treat time as though it is an invaluable resource that must be utilized to its maximum potential. Every minute of my life is scheduled to a T, and meals in particular seem to be treated as a necessary evil that must happen as quickly as possible so as not to interrupt whatever important work needs to be done. I found that I had great difficulty adjusting to this particular aspect of Italian culture at the beginning of our trip, but by the end I was perfectly happy to spend two hours of my day enjoying a four-course lunch as we looked out across the beautiful Arno River. We sat here for three and a half hours.

The academic aspect of studying abroad is thoroughly rewarding and I would recommend it specifically to those interested in international interaction. There are a few pieces of advice I would offer someone who is interested in studying abroad. The first is to make sure not to underestimate the importance of balance. Studying abroad isn’t exactly a vacation, but spending enough time on your academics will allow you to have a more educated understanding of your host country and its people. You will appreciate it in the long run. The second is to allow yourself room to deviate from the plan. Lose yourself in a city you don’t know, meet new people, ask for help, trust yourself and let yourself be vulnerable so that your time abroad changes you for the better.