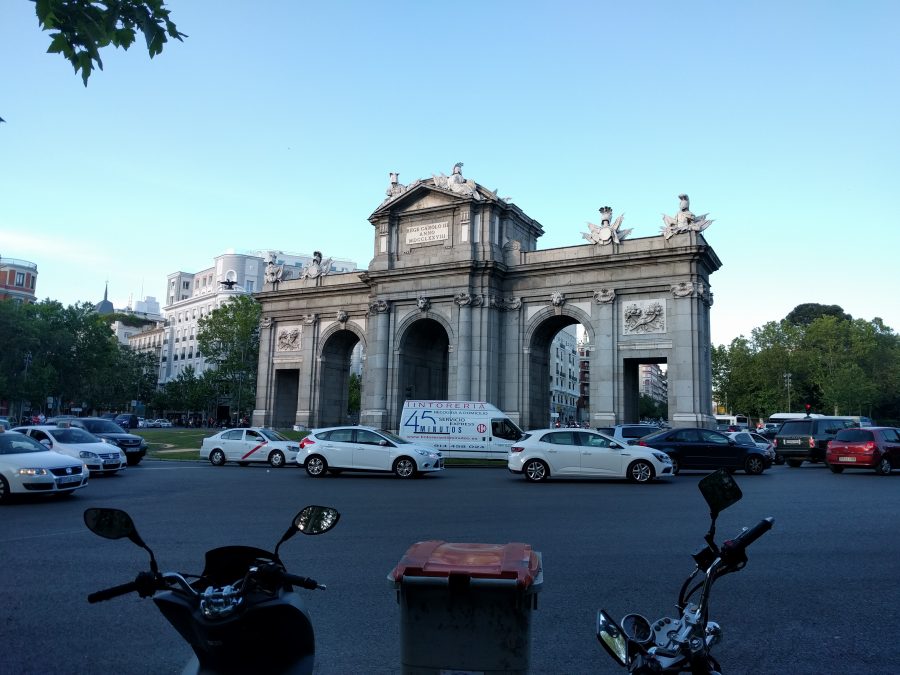 Shreyas Sreekanth visited two locations, Madrid and Lisbon, and gave us some tips for what to do and see in both locations. Read on to find out more!

Since this was the first time I was visiting Europe, my excitement before leaving was overwhelming. We had a large group of people from different programs joining us in these wonderful locations, which made it even better to meet new people and hang out together. The pre-departure session that my classmates and I had with the Ahler’s Center was very helpful to prepare ourselves for the locations we would be traveling to, as we had speakers present who are from Lisbon as well as a person from the US currently studying in Madrid. They were kind of enough to give us a broad picture of what the locations are like, safety tips, appropriate traveling means, as well as suggestions of different restaurants and places to visit.

Lisbon is a great city in terms of the people, locations, food, and places to visit. The opening dinner on the first day was a great opportunity to meet everyone in the program. The authentic Portuguese cuisine was to die for, as I had the best sea food and wine. Our class was held in Catolica School of Business and Economics, which was a 10-minute cab ride from our hotel. The professors and students from the school were very receptive and catered to our needs in the best way they could, which made us feel more comfortable in our new environment. The class schedule was perfectly balanced between attending class and completing school work before we went out to explore the city. The city tour that the Ahler’s Center planned was what opened my eyes to what Portugal has to offer, as well as its prominent history. We had a certified guide who took us to the oldest part of the city, gave us information about how the city had been destroyed by an earthquake, and described what had to be done to build it back up to what it is today. It involved quite a walk, so it is highly recommended to be in comfortable attire and shoes (which will be stressed by Allison the day before). Everyone was quite tired after the session, but the highlight was going to an amazing pastry place, Pastéis de Belém, where we were served the best chocolate tarts I have ever had until now. This is a must try in Lisbon, as I ended up having a few every day after the tour.

The other must visit place is Sintra, where beautiful castles are located, as well as a breathtaking view from the western most part of Europe. The hike is through some wonderful small waterfalls and various ancie nt castles. Again, it is recommended to wear comfortable shoes and attire, as it is almost a 4-hour hike to see all of the sites. The city also a lot of small little restaurants and boutiques that are interesting to peruse in, the restaurants are perfect to go with friends after a long day’s trek in the evening. A peculiar trend that I observed in Lisbon is that dinner time is usually around 10 PM, and hence, the places are open quite late. The language is not really a problem, as all the restaurants have English menus, and the minimal English that the cab drivers know is sufficient to get around the city without much difficulties. However, it is recommended to learn a few basic words in both languages, but if not, it is very important to carry a business card of the hotel with you at all times in case of an emergency.

After a week in Lisbon, we headed towards the city of Madrid in Spain. The most prominent experience I had in Madrid is the Tapas tour. Tapas is a must try in Madrid, as there so many variations to the small dishes and tapas is available in a lot of different places. The Dean also joined for us the event, making it that much better. We were lucky enough to be in Madrid during the UEFA finals between two of the most prominent clubs in Spain, Real Madrid and Atlético. The craze about soccer in Spain is real, as it is widespread throughout the city, and it seemed like the city came to a halt for those entirety of the game.

We were also fortunate enough to have guest speakers at both the locations who were from Europe to give presentations on their respective regions. The opportunity to learn about the history of both countries, the EU, and the Eurozone in general was fascinating. The industrial visits to We Do Technologies in Lisbon and the Google campus in Madrid was very useful to understand how business functions in E urope, and the experiences described by the founders of We Do technologies was very informative. They explained the challenges they faced in their industry, as well as how different it is to run a business in Europe in comparison to the US. The industrial visits are a core part of the program and it is mandatory to attend both of them. On a final note, the logistics and program itself were carried out very efficiently, with many thanks to Allison from the Ahler’s Center, as she coordinated with the local schools and kept us informed regularly through Whatsapp. Both of the cities were wonderful places to visit, to experience the European culture as well as to gain new knowledge, and a few credits, at the same time!

2 thoughts on “Tips for Traveling to Lisbon and Madrid”