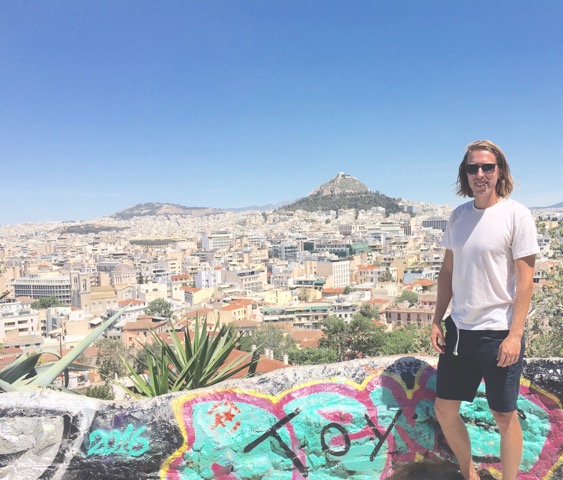 Ian Manahan has been on a long journey visiting many countries throughout Europe, one of which was Greece, that left a lasting impression on him. Aside from exploring Athens and falling in love with Greek food, Ian found the importance that the role of family businesses play in the Greek economy.

When I stepped off the plan in Athens, for the first time in my life, I was immediately caught up in the historical mythology of Greece. I stayed at an Airbnb with a nice Greek couple in their 40’s who provided me with fantastic hospitality that lasted my entire stay. After getting settled, I sat down and learned more about my hosts, while sipping what was quickly becoming one of my new favorite spirits, ouzo, and trying various Greek cheeses on bread. I had only given myself a day to get settled and see the sights, before class started at my school, ALBA, so after my conversation with my hosts, I planned out my next day and went to bed. Greece was dry when I visited in late April, but the beauty of the ocean water off the coast never failed to make me feel full of joy. Greece was one of twelve countries I visited in Europe in 2016 and, in my opinion, Greece had the best food. I loved the way that the Greeks prepared their souvlaki, which made me realize that saving money packing one’s own lunch might not always be the best option. My favorite souvlaki was probably made with small pieces of lamb meat, cooked on a skewer over coals, then placed on pita bread with fresh Mediterranean vegetables and what I remember to be tzatziki sauce.

Although many of the tourist areas in Athens, like the new Acropolis museum, were busy with tourists and well preserved, it appeared there were many areas of the city that were no longer as well taken care of. The traffic also seemed fairly heavy, and at times chaotic, with the many ‘papaki’ and ‘Papi’/mopeds darting around on the roadways. Although I never needed to go far for fantastic baked goods or food, between the multiple jobs my Airbnb hosts worked and the inconsistent infrastructure I observed, Greece seemed to be a place where economic growth and optimism were at an all time low. What could the future hold for them?

The class I took in Athens/ALBA was called “Managing the Family Enterprise”, and it was taught by a visiting Italian professor from the Nottingham Business School in the UK, who had one of the most confusing accents of anyone I met in Europe. However, he was very self aware and never failed to make the class fun as a result. For me, learning about managing a family business wasn’t something I had really thought about, until I started working on my New Venture Management MBA with USD and saw the chance to take the course in Greece while I was abroad.

I think one of the bigger takeaways from the class was how large the family business market is. Family owned businesses are almost half of the GDP in the US and constitute approximately three quarters of the GDP in most other countries. Therefore, how family businesses are managed, especially in regards to succession planning, is a fairly relevant discussion for business and globalization moving forward. The family is the most important initial element in creating the company culture, so the question is how can business and culture be continually maintained and adapted to a constantly changing market? Additionally, roughly all of Greece’s mid-sized companies are family controlled and up to 60% of their large firms are family controlled.

Greece likely needs to pursue more than one change in order to make the turn around the world would like to see them make economically. The euro did not have a good rap with my hosts, nor did the EU. Greece has multiple built in markets with its tourism and food, but the Greek citizens trust in the government is not where it needs to be in order to start making changes that need to be made. After spending two weeks in Greece, I thought that many travelers would still want to visit the beautiful ‘birthplace of civilization’ as we know it, but without strong political and business leadership to re-write the economy, I wonder if we will see its citizens continue to struggle and as a result, lose some of its integral culture. Greece’s challenges and opportunities are not unknown to the world, and I hope to return to a fully revitalized Greek economy someday soon.