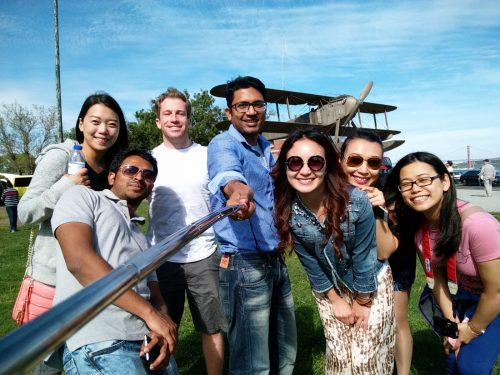 Rajat Raizada made the journey to Lisbon and Madrid this summer, experiencing a contrast of Portuguese and Spanish business etiquette to that of his native country, India. Please enjoy reading his perspectives on European and Indian cultural practices, and how to have cultural-awareness in international business. “During my summer abroad trip to Spain and Portugal, I noticed many cultural differences between these countries and India. I made several points about what occurs to me as different in Spain and Portugal from India.

Indian society is very hierarchically organized which is apparent from the way parents raise their kids. The parents are the boss and the kids follow the instructions of the parents. Even in business environment, the companies follow a hierarchical structure. In organizations, hierarchy is the central way of managing. If you work with a software company, even a small one, you’ll find a project manager, who is managing the team leader, who is managing the programmers, even in the smallest projects. And the programmer will need his superior for anything that he does. However, in Europe (Spain and Portugal) most companies give people responsibility, freedom and measure people on their performance within those boundaries.

In India, people are very open, discussing personal, professional, and all kinds of topics with their friends and colleagues. India is a collectivist society and major focus is given on relationship building. Before conducting any business, two parties generally meet 2-3 times to develop good relations and bond s between them. While in Europe (Spain and Portugal), people are always trying to be very polite and won’t share anything negative or offending (which also makes for a very positive cultural experience). It is sometimes hard to really get the truth or the person’s vision on a subject. From a business perspective, it is valuable to learn about different cultures, as by understanding them, it becomes easier to develop a successful cooperation.

Though India is moving towards gender equality, India is still predominantly a male-dominating society. This is quite evident as most of the important financial decisions are made by the male member in the family. In companies, gender ratio has not yet reached 50:50 and most of the senior positions in the company are taken by males. In Europe (Spain and Portugal), there is no gender bias and men and women work together and share the same goal. Unlike in India, some key positions in Portugal and Spain are held by females in the company.

While many Spaniards of the opposite sex will greet each other with a kiss on both cheeks, this is not as common in business relationships unless you know the other party well. While in India, handshake is most prevalent way of greeting in business community (don’t even think of kissing). In Europe (Spain and Portugal), people use first name for addressing a person in the company. In India, though, addressing by first name is catching up but people still prefer to be addressed as Sir or Madam (especially if you are talking to senior).

In Portugal, punctuality is not seen as very important. Interestingly, people from the North are usually more punctual than those from the South. In fact, it is polite to arrive five minutes late. The host usually arrives “on time” but all others are usually late. When you arrive for a meeting, do not be offended if you are kept waiting for up to 20 minutes. This is the usual practice in Portugal. If you are kept waiting more than 30 minutes, then it would be quite normal to express some discontent. While in India, people are generally punctually (not as punctual as Americans) and arriving 5 minutes late in a business meeting is not considered rude.

These are the things which I learned during my trip to Spain in regards to doing business:

Doing business in Spain requires good understanding of their culture and values. Spanish culture has influenced the world greatly in the past. At one time, Spain ruled in South America, the Caribbean and as far east as the Philippines. As a result of this large colonial influence and the growth of Spanish as a second-language, Spanish is regarded as the second most spoken language worldwide. Spain has a relational culture. To do business in Spain means one has to build a network of contacts in different sectors of society. To get your client to trust you right from the start, it helps to provide him with references about yourself and your company from important people in Spain. Getting yourself introduced by a trusted relation of your new client is also a very good way to start the initial contact. Relations are built personally, not by telephone or e-mail. Out-of-the-office meetings like lunches or dinners offer the best occasions to get to know each other better. This aspect of doing business of Spain is very similar to that of India.

The Spaniards like to dress well. Formal business suits are worn by men with dark colors in winter and light in summer, and fashionable business dress is worn by women. Spain has a large shoe industry therefore shoes are an important part of their dress. The social status of a person is directly connected to the dress. Young people, however, are nowadays generally free to wear comfortable clothes.

Portuguese people are very friendly and social. Generally, it takes 1-2 meetings to build a relationship before starting a business with them. Some of my other key takeaways about doing business in Portugal are mentioned below: Business dress is usually rather formal. Casual dress is still unusual in Portuguese companies, even in modern or creative industries. In some cases, however, companies allow their staff to dress down on Fridays. However, a standard business suit is still the most common form of dress among businessmen.

Portugal has a slightly higher level of corruption than other western European countries. Corruption is an important political and economic issue and still represents an enduring characteristic of Portuguese business culture. Most cases of bribery and corruption are reported from the public sector. They are related mainly to concessions, unclear approvals of contractors and specific economic lobbying or job offers to friends and family members.

In the Portuguese business environment, it is normal to give a gift to customers and partners. To reject a gift is seen as offensive. Also, as gifts are considered to be a personal gesture, it is not polite to re-distribute a gift to staff.”