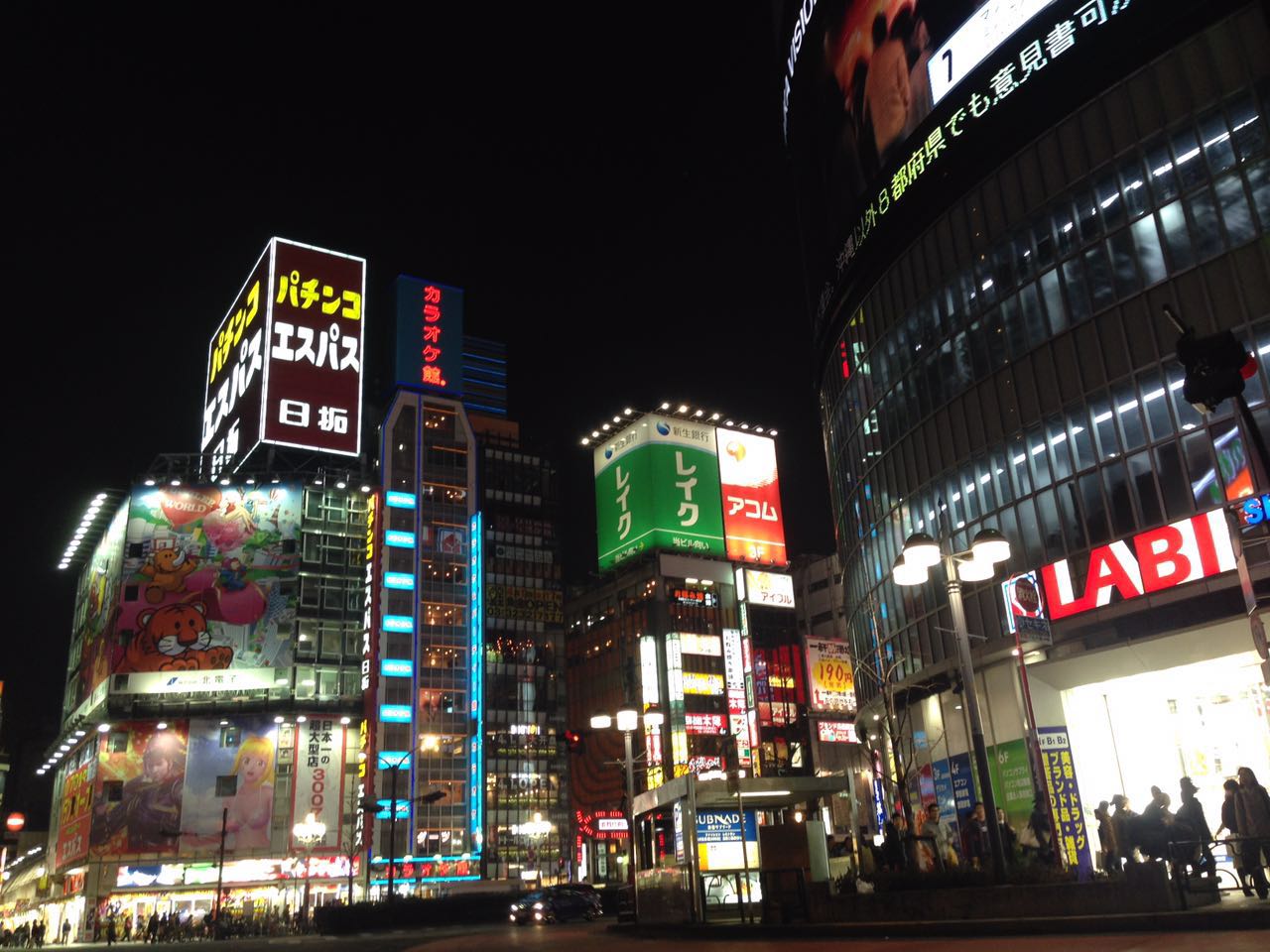 Jessie Ju made the journey to Tokyo this past spring break in order to experience the contrast between Chinese and Japanese culture, as well as provide future recommendations for traveling to Japan.

Japan, an island country that’s only one and a half hours flying from my home town, Shanghai. I have landed many times in Narita International Airport of Tokyo, yet I had never set foot in the country until this spring break. I was beyond excited to explore and get to know the Japanese culture.

Japanese culture and Chinese culture are very intertwined, yet distinct from one another. We kind of look similar, have something in common in parts of our languages, both eat rice and drink tea. What could be so different? And the answer is, everything!

Getting there and back
There are rarely any direct flights between San Diego and Tokyo. There are two major airlines in Japan, JAL and ANA, which both have frequent flights to the U.S. Both are great airlines with outstanding services. Most of the time, you will be connecting at LAX for your international leg when flying with them. You may also choose American airlines, such as United and Delta, or Asian airlines, such as China Eastern or Korean Air. It all depends on where you connect and the length of your layover. Total traveling time could vary from 12 to 36 hours. There are two airports in Tokyo, Narita (RNT) and Haneta (HND). Narita is larger and most international flights go through there, but it’s further away from the city (about 1 and a half hour by public transportation). Haneta is much closer to the city, but flight options are limited.
Tips:
– Bring a neck pillow and wear loose clothing, as well as comfortable shoes
– Get on Japan time as soon as you board and sleep as much as you can during the flight
– Stay hydrated!
– No matter how tired you are when you land, try staying up until normal bed time First Impression
Like most metropolitan cities in Asia, Tokyo has a huge population and very sophisticated public transportation systems. It’s busy, crowded, and exciting. However, it is also a society that prides itself on being highly organized and self-disciplined.

The best place to observe Japanese people is, without a doubt, in the subway. The Japanese subway lines are owned and operated by a few different companies. They virtually connect the entire city and it is the reason why Tokyo, being a highly populated city, does not suffer from traffic problems as a lot of other major cities do throughout the world.

So now, back to our observation of people in the subway. Japanese people all follow unwritten rules that have formed over time. For example, when riding the escalator up and down in the stations, the Japanese all stand on the left side of the stairs and leave the right side open for those who want to pass. When riding the train, people rarely talk with each other or on the phone, nor do they drink or eat inside the train.

Food
We had a survey of our class before going to Japan and the number one thing everyone was looking forward to was Japanese food. Japanese people are known for their seafood, from sashimi (raw fish), sushi, takoyaki (octopus balls), tempura (deep-fried seafood or vegetables) to teppanyaki (pan fried). Japanese food stresses the freshness of ingredients and the balance of subtle flavors. The first place we went to in Tokyo was a conveyor belt sushi restaurant. A conveyor belt sushi restaurant is where they place all the food on a long, moving belt that runs through the entire restaurant and the food plates are color-coded by their prices. Customers can just grab the food off the belt and at the end of their meals, the wait staff would calculate the total plates based on the empty plates of different colors. The sushi chefs work in the inner circle of the belt and replenish the food on the belt as needed. Another unique dining experience I had in Japan was at a ramen restaurant, where you start your experience by ordering on a vending machine placed outside of the restaurant by the door. Available items are listed with pictures and their prices. You can simply choose the items by pushing the button right next to the picture and a ticket with your order details will be printed at the end. The restaurant itself has stalls instead of tables, and each of these stalls has its own water tap, condiments, and menus. Each stall has a window that opens directly to the kitchen. Before you turn in the ticket from the vending machine, you will fill out a form with your preference of add-on ingredients (garlic, onions, etc.) and flavors (spiciness, saltiness, oil). These stalls can become larger per each customer’s preference. From my personal observation, most customers would rather enjoy their meals alone. It was quite an experience, one that you will never see anywhere else in the world. Attractions
During the time we were in Japan, we visited a number of tourist attractions, including the famous fish market and the Tokyo Imperial Palace where the emperor lives. Among these places, the one that stands out is the Meiji Jingu Shrine. Built in 1926, the Meiji Jingu Shrine is considered a spiritual place for Japanese and foreign visitors. The man-made forest around the shrine is seen as the central park of Tokyo. Maybe it doesn’t serve as an accurate metaphor, but it certainly gives Tokyo a layer of balance between human and nature. We had the luxury to attend a Shinto blessing session that the shrine conducts for both Japanese families and foreign families. The blessing procedure involved praying, singing, dancing, and blessing. An interesting aspect of the Shinto is that there’s no humanized god type figure. Instead, they believe that every living creature has a “Kanji” (spirit) and that “Kanji” is what they worship and what gives them power. In my opinion, this belief is a religious interpretation of the relationship between human beings and nature. Shopping
Tokyo is a paradise of creative products for demanding shoppers. Some of the world’s most amazing innovations could only be found in Japan, such as the multi-functional toilet seats, skin care equipment, and much more. The most popular shopping areas are Ginza, Shibuya and Asakusa, representing three distinct shopping experiences, high-end, offbeat and traditional, respectively. Look out for the most bizarre items, you’ll be pleasantly surprised.

Class
The combination of corporate governance and Japanese culture is an interesting thought. Before the trip, I had always envisioned it as being a showcase of best practices, given Japan’s leading position in corporate establishment and the high degree of organization and discipline of the society. To my surprise, the corporate governance practice in Japan has been largely impacted by its culture of always taking the middle path, and explains a lot why Japan has not been able to lift itself out of the bubble and reboot its economy. We visited a number of great companies on this trip, including Toyota, KPMG, and the Carlyle Group. We also had a long fruitful meeting with Mr. Taro Kono, the Japanese Cabinet Minister & Chairman of Public Safety Commission, who is known to be very straightforward about his political and economic opinions. He pointed out a number of issues and challenges that the Japanese government and companies are facing due to Japan’s corporate culture and its corporate governance conduct. KPMG gave us a rather holistic view of the recently established Japanese corporate governance code and how it’s implemented by companies. They have also illustrated the roles of accounting firms and consulting firms, such as KPMG, in supporting and monitoring the execution and compliance of the code. Toyota, on the other hand, gave us a thorough demonstration of their vision, innovative efforts, and more importantly, how these activities tie to their CSR commitments. We also had the privilege to experience some of their new technology in Toyota Mega Web, a showroom of Toyota’s latest products and innovations, where we got to learn how to ride the Toyota Winglet, a self-balancing two-wheeled scooter. These company visits really enriched the content of the class and allowed us to deepen our understanding of corporate governance in a real business context. It was overall an extremely exciting and insightful week. The only regret of this trip was that we did not stay long enough for the sakura (cherry blossom) to reach its full blossom. I guess it serves as a perfect excuse to come visit Japan again 🙂