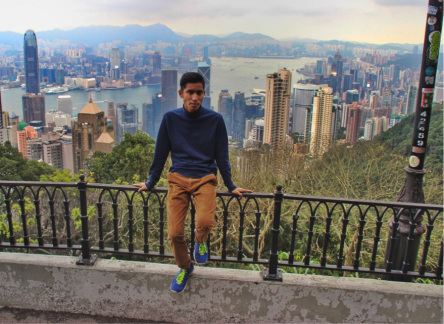 “During Intersession 2016, I took a whirlwind of an adventure to Hong Kong. With little knowledge of the Chinese territory, I packed my bags and hopped on the plane with high hopes of being fully immersed with new foods, smells and unique culture that defines the island nation. My decision to go to Hong Kong, as opposed to the other intersession study abroad programs available, was based off my increasing fascination in Asia as an economic entity and trade partner to the United States.

After a sixteen-hour direct flight from Newark, I landed in Hong Kong International Airport tired, hungry, but above all ecstatic to be starting my adventure. Arriving a day earlier than the start of the program it was up to me to find my way to the NTT House on the Hong Kong Baptist University campus. After a quick trip to the airport McDonalds, I took the airport express to Kowloon station. My excitement was clearly demonstrated as I was constantly shifting to the left and right of the train trying to get a glimpse of Hong Kong whizzing by in the night sky. After departing at Kowloon station, I frantically pulled out my directions to give to the taxi cab driver. His thick accent and limited knowledge of English solidified that I was no longer in familiar territory. After a few fast stops, turnarounds, and direction clarifications, I made it to a yellow painted, slender high rise that I would soon call my home away from home.

The next morning, I woke up to the sound of rain tapping the window. I got out of bed and quickly tore back the curtains to reveal a panoramic view of never ending skyscrapers stretching from Kowloon all the way to Hong Kong Island. I was ready to explore. I quickly got ready and took the elevator down ten stories to the lobby where I got to meet some of my fellow classmates. Our professor Dr. Gin gave us a very thorough tour of all the places around Hong Kong that might be of use to us during our stay. As we progressed throughout the day, I walked around feeling like I was separate from my body. How could I be here smelling, seeing, tasting something so different than just one day ago? This is a question I would consistently think about as I continued to experience what Hong Kong had to offer. This first day excursion set a perfect tone for the rest of the trip. As an island nation, Hong Kong has a great connection to the sea. This picture shows the connection between the land and the sea, as well as the cultural fusion due to international trade.

After only a few days in Hong Kong, we all piled onto a bus to make our way into mainland China. After what felt like a five minute ride, due to a wonderful thing called jet lag, we arrived at the cruise ship terminal. The boat went so fast that we were gliding above the water, and this was not a small boat. In no time, I could distantly see the Macau skyline made up of the numerous casinos and skyscrapers, including Macau tower, the highest place in the world to bungee jump. Looking out the window on the bus, there were many similarities I could see between Hong Kong and Macau.

There was this unmistakable mix of east and west, not only in the buildings and the food, but in the people as well. In a city where my pre-conceived conceptions led me to believe Macau was just newly developed land, I was delighted to find and experience years and years of history in the ancient temple and maritime museum. Day quickly turned into night, and the neon lights lit up the dark sky.

Following a late night, I found my seat back on the bus and we headed to Zhuhai, China. Passport in hand, I passed through immigration once more and boarded yet another bus that was to take us to our scheduled company visit. Immediately I felt a sense of familiarity. I don’t know if it was the “California Noodle” restaurant that was situated adjacent to the bus, or the fact that, unlike Hong Kong and Macau, people in mainland China drive on the right side of the road. We soon arrived at MTU Maintenance, a large airline jet engine maintenance company. Seated at a large conference table, we were all introduced to the top management of the Zhuhai division. Being a half-Chinese, half-German company, it was interesting to witness and learn the dynamics and complexities of foreign business in China. The gentlemen giving the presentation were very knowledgeable and conducted themselves and the presentation in very German fashion. The presentation concluded, and we were led on a comprehensive facility tour, which included a venture into the wind tunnel where they test all the engines. After friendly goodbyes, we boarded the bus and made our way to Guangzhou.

Our hotel was lovely, with modern conveniences and amenities to satisfy any USD student. But, no matter how nice the hotel was in the inside, the harsh reality of a city blanketed in smog lay just outside the door. In the case of both Guangzhou and Shenzhen, I was able to put to use my Mandarin speaking skills. While these cities are located in Southern China, where Cantonese is the dominant dialect, it was not difficult to find Mandarin speakers. Walking into the Shenzhen fake market, I was in awe at the pure scale of the operation right next to the Chinese/Hong Kong border. Walking through the five story mall, you could feel the energy of the shoppers looking to find a fake designer handbag for a fraction of the cost. It was exciting to go into the markets and bargain for a lower prices using a mix of English and Mandarin. I believe the simple gesture of trying to adapt to the Chinese culture helped me score some really good deals. After sifting through all the little shops and pathways, we went traveled back to Hong Kong.

I woke up the next morning to the harsh reality that I was not on vacation that I was actually here to take a class, International Economics (ECON 333) to be more precise, taught by Dr. Alan Gin. I enjoyed taking this class, especially in a foreign country, because unlike some classes where it is all theoretical, the things I was learning in class were directly applicable to my Hong Kong experience. I learned how currency exchange rate can dictate so many aspects of international business. Hong Kong is regularly in the top three of the world’s busiest ports. We learned how Hong Kong became such an economic power, by looking at the effects of different economic policies, inflation, government intervention and how the supply and demand of currency can shift due to these factors. The material covered in the course will help me in my future career in international business, specifically when dealing with international contracts and exchange rates.

As a lover of photography, Hong Kong offered boundless opportunities to capture the “perfect pic.” The contrast between hard and soft, modern and tradition provides an outlet to take a picture that not only captures the beauty here and now in the present, but also captures the story and history of the people and landscape and how it all fuses in a way their either works or doesn’t function in today’s society.

While I could go on and on about my once in a life time experience in Hong Kong, I will briefly touch upon my top five highlights:

Overall, I had the best time in Hong Kong. I hope to apply the physical skills I learned in my economics class, as well as the soft skills I learned throughout the interaction with the city and its locals in my future international business endeavors. Thanks to the wonderful staff, supervisors and the best group of students, I will forever cherish the memories I made in this dynamic city.”

Visit our website for more information about study abroad.