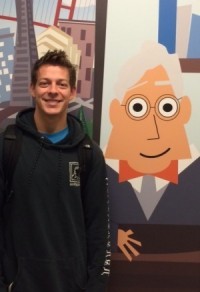 “Navera, a start-up in San Francisco, recently tasked me with determining the viability of expanding their product internationally. The team wanted to find out whether potential revenues would outweigh the costs of adapting their product to fit a few select markets. To give you a bit of background, Navera works in the healthcare space, creating fun, user-friendly cartoons designed to help consumers better understand available healthcare options. It’s a really cool product, and they’ve seen great success within the US. In the everlasting pursuit of increased revenues, they’re looking to offer additional language support to target native Spanish-speakers.

I began by determining the potential market size that would be opened up by offering Spanish support. After Mandarin, Spanish is the second-most widely spoken language in the world, so there’s huge potential here, right? With over 400 million speakers and official language status in 21 different countries, Spanish could offer Navera the opportunity to tap into markets all across Europe, Africa, and South, Central, and North America.

I split the potential expansion into two different categories: (1) international expansion into Spanish-speaking countries in EMEA (Europe and the Middle East), and (2) Mexico and LATAM (Latin America). Everything looked great for EMEA. There are about 38 million native Spanish-speakers there, with only three varying dialects, all primarily located in Spain. Mexico and LATAM weren’t so bad, either. There are about 221 million Spanish speakers in the emerging economies within this region. And the rapidly rising population and income in these areas will only lead to greater demand for healthcare. The product fits, and the market is huge. Awesome!

However, the issue is there are so many variables to take into account before jumping into these markets. For one, the way healthcare works in the US is incredibly different from these countries. There are tons of government regulations and compliance codes, which we need to be familiar with before launching the product. Not to mention a severe lack of brand awareness, local Sales and Business Development teams, and cultural differences to take into account. Quite simply, launching internationally would be a huge task, on top of Navera’s current work domestically.

Scaling back, I decided to look just at the Hispanic population in the US. Sifting through the US Census data from 2015, I found that the market here, too, is huge. 62% of all Hispanics in the US predominantly speak Spanish at home. A huge number of these people simply can’t speak English fluently, and there really is a need for Spanish support here. Cutting the data down, I found that 5,500,000 of these Hispanics are over 18 (check), not fluent in English (check), and earn a salary (check), making them eligible for health care coverage through their employer.

I started to believe we should start expansion domestically. Navera had previously stated that they wouldn’t consider international expansion unless they were guaranteed at least $25M in revenue, which was starting to look bleak, given the major differences in healthcare internationally, compliance factors, operating costs, and cultural factors. Starting small, adapting the product by offering standard Spanish support, and targeting these 5,500,000 native Hispanics will give us a good benchmark of how successful this project could be.

The biggest thing I learned, through this research, was that you can never get ahead of yourself, especially when looking internationally. The market for selling to these overseas markets is undeniably huge, and very profitable. But the costs (mostly in terms of time and complexity) far outweigh the benefits, in the short-term. In this case, it’s smarter to start small, test the product within our current US market, and take it from there.

There I had it. I organized my findings and recommendations, presented them to the Head of Marketing, and helped to reinforce their decision to focus on the US market first. The biggest thing I learned, through this research, was that you can never get ahead of yourself, especially when looking internationally. The market for selling to these overseas markets is undeniably huge, and very profitable. But the costs (mostly in terms of time and complexity) far outweigh the benefits, in the short-term. In this case, it’s smarter to start small, test the product on Spanish speakers within our current US market, and take it from there.

Throughout my time working on this project, the team was incredibly supportive of me, offered me an abundance of internal data and information to use, and truly seemed to appreciate the findings that I provided them. Their international expansion hasn’t been terminated by any means – we’ve just taken a more cautious, measurable approach toward growth.”

Visit our website for more information about study abroad.