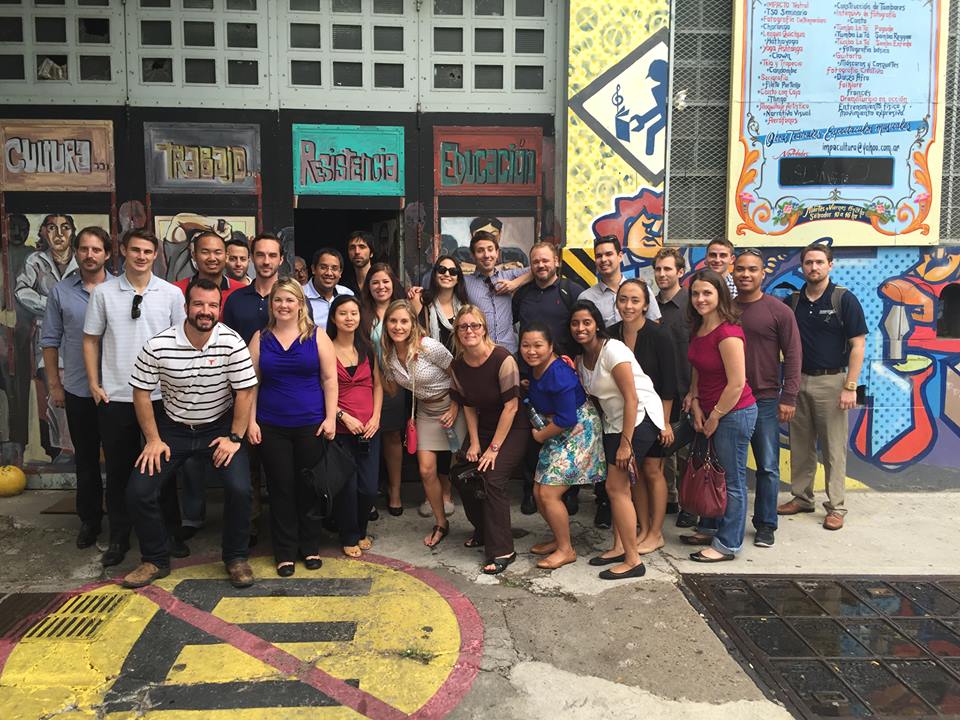 In January 2015, graduate student Elizabeth Tanner participated in the intersession course (Global Entrepreneurship for Social Change) program in Buenos Aires, Argentina and got a first-hand look at Argentine economics, including a growing wealth gap, which has been affected by both domestic political and financial instability starting in the 20th Century.

One of the ten wealthiest states during the 19th Century — a result of prosperous trading with European countries, flowing immigration and rich natural resources — Argentina began going through political and financial stability, as did much of the world, during the two World Wars. Add in political instability, degenerating fiscal policies and a domestic currency crisis in 2001, and socioeconomic inequality rose immensely. The closing dinner for the students in Buenos Aires; Elizabeth Tanner is second from the right.

Fast forward to 2015, Elizabeth Tanner was able to see and experience how Argentinian businesses are working to decrease that gap. “The role of business and entrepreneurs [is] in finding solutions to the wealth gap, creating and providing sustainable jobs, and improving the social climate in Argentina… Many business and entrepreneurs are taking an active role in driving social change through business initiatives. We witnessed this first hand through site visits during our course in Buenos Aires,” said Tanner.

Outside of the classroom, the participants went on numerous site visits to companies and organizations who are directly modeling their company goals and practices towards helping decrease poverty and grow the middle class. Tanner commented, “I was most impressed by Fundación Avina. We visited their Argentine headquarters in Buenos Aires… At Fundación Avina, they are addressing social challenges by creating sustainable profitable ventures. We learned about their efforts in Argentina. In the slums of Buenos Aires (and every metropolitan area globally), there are a subset of people who create income by picking through garbage and reclaiming the valuable and reusable waste… Waste pickers are an important part of our society [as they] are preventing landfill and assisting in achieving environmental sustainability and reclaiming commodities.” However, because they are working informally, their rights and leverage concerning wages. Fundación Avina, in response, has created cooperatives that unite the workers and enable them to get higher wages. On the legal end, the philanthropic group has worked on pushing public policy to formally recognize these workers. View of Buenos Aires at sunset from the hotel.

Overall, Tanner’s experience has shown her how many businesses around the world are concerned just as much, if not more, about the ethics surrounding their practices and goals as they are with their bottom line. “The Golden Rule is moving to the forefront of many entrepreneurial efforts globally and businesses are prioritizing social responsibility. In addition, individuals and businesses are recognizing that sound business models and sustainable revenue flows can benefit social initiatives in creating long standing change,” Tanner said.