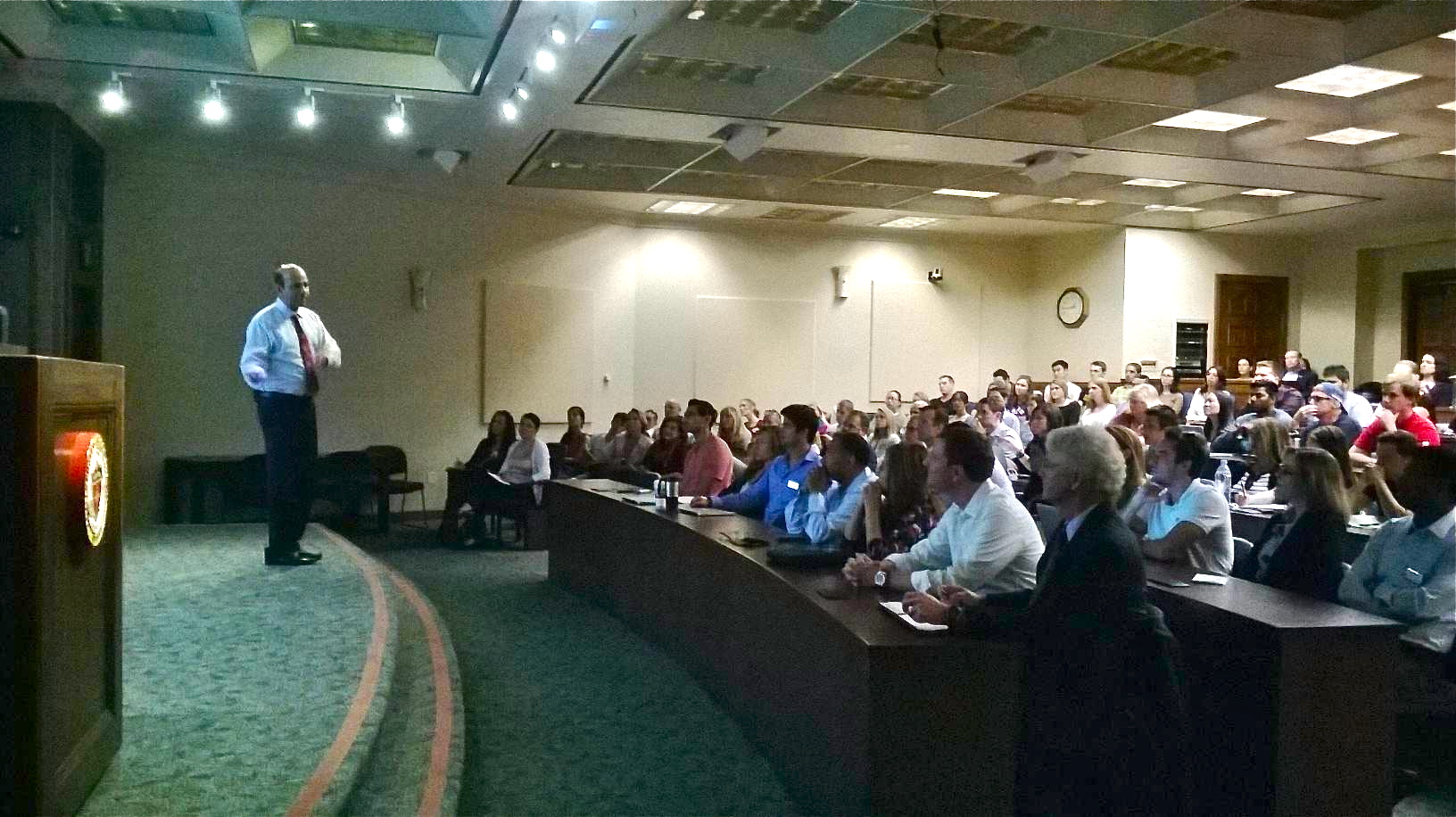 Dr. Vijay Govindarajan, Coxe Distinguished Professor at the Tuck School of Business Dartmouth, New York Times and Wall Street Journal Best-Selling Author presented on the concept of “Reverse Innovation” (below, his book co-written with Chris Trimble) on October 16, 2014. This theory demonstrates that innovations are increasingly originating from developing nations and being transported (sold) into developed nations, in contrast of the traditional opposite flow of innovation.

“I can tell reverse innovation is going to fundamentally change every industry in the next several decades,” Dr. Govindarajan said. “It perhaps represents the single greatest growth opportunity for corporations. It’s going to impact manufacturing, consumer goods, healthcare, education, transportation, energy… you name it.”

Dr. Govindarajan began by discussing the common question surrounding why reverse innovation can work, which he describes as: “Why would a rich man want a poor man’s product?” He then spent the rest of his presentation discussing various examples where reverse innovation has successfully occurred.

The first example he uses is healthcare, an area of interest for both developed and developing countries alike. General Electric (GE), known for its medical imaging equipment, produces an electrocardiogram (ECG) machine, which is used in preventing heart attacks. Its retail value in the United States is $20,000, with a usage price of about $200 per scan. Dr. Govindarajan noted that in India, only the most wealthy people and hospitals can afford those costs, as most of rural India only receives $2 per day in income and has little or no access to hospitals and trained physicians. However, as he mentions, “non-consumers still have the same necessities as consumers,” and thus both the wealthy and the non-wealthy are at risk for heart attacks and are in need of ECG machines. From a business standpoint, Dr. Govindarajan says, in relation to consumers and non-consumers, “The single-biggest growth opportunity of corporations today is to turn non-consumers into consumers.”

General Electric shares similar viewpoints as Dr. Govindarajan, as they developed an ECG machine whose retail price is $500 and each scan costs 10¢. The machine is small and lightweight, allowing for easy mobility, as well as works on battery (as opposed to the $20,000 model, which only uses electricity) and its operating system is much simpler to use. Therefore, people in places such as rural India will have the income, mobility, and training needed to transport and effectively operate the machine so many more people will be ECG consumers than before. This new model is currently sold in India as well as 194 other countries, and through whose sales is generating financial growth for General Electric in the United States.

His other examples included other healthcare-related markets, such as surgeries and artificial limbs, all with the same outcomes of “pushing the price performance paradigm” (doing more with less) that Dr. Govindarajan says is fundamental is reverse innovation. He further demonstrated that the reason American companies are so hesitant to approach innovation with this model is because they are “poorly positioned to capture this opportunity,” meaning they have excellent capabilities but they approach international innovation with American models and logic rather than those of the cultures in which they are innovating. Using examples relating to Kelloggs and ESPN innovation efforts in India, Dr. Govindarajan explained how corporate cultural relativism can increase profits and spur real innovative progress. Dr. Govindarajan concluded with remarks on the need to change the types of fundamental questions and definitions of innovation from “transporting” global strategy from one country to another to identifying and assessing the problems of the specific non-consumers of the targeted region.

If you missed this exciting International Speakers Series presentation or would like to to watch it again click here.