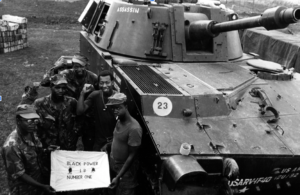 In order to enrich my understanding of African American history I attended two events titled “The Black Present and Presence”. Speakers Dr. Corey Barnes, Susie Poly-Babka, Khalia Ii and V. Dozier explored the black presence in the day to day lives of the average American and the concept that there is nothing new under the sun in their presentation on February 7th and April 21st 2022. Sadly all these beautiful contributions from African American culture have become a commodification of the black culture and credit has not been given to the black presence. The presenters brought attention to the historical influence and the invisibility of black womens influence. There is a strong influence of African American culture in America that started with the enslaved or the people and communities in Africa but it has always been suppressed or uncredited. This is highlighted by Nike Air Force Ones, Gen Z lingo and handshakes, acrylic nails, jewelry and historical culture like Ring Shout and Call and Response.

Black culture within Gen Z is everywhere. From the shoes we wear on our feet to the words coming out of our mouths we are influenced by the black population, sometimes without even knowing it and without giving credit. Nike Air Force Ones can be found on every teenager or in their closet yet they do not know the shoes became popular in Harlem and started with the black community wearing them (Barnes). Additionally, nameplate necklaces have become a trendy accessory started by black women. The only difference and why it is unknown black culture is because it only becomes trendy when it’s on a white body  (Dozier). Take Kylie Jenner for example, she wears long, colorful acrylic nails with pride as teenage girls adore them. But when those same nails were on a black body they were seen as trashy and “ghetto” (Dozier). Florence Griffith-Joyner is a black athlete that has been running with long nails and yet unlike Kylie Jenner she was bullied for them. The credit to these nails is going to Kylie Jenner in the form of praise which highlights the exact commodification of the black culture and community that America has been doing since they stole black bodies from other countries. Dozier highlighted in her presentation that consuming does not equal credit and marginalization of black trends hurts the African American community. The idea that a culture is commodified takes away the respect and turns people’s lives into fashion statements. A. Phillip Randolph stated “you possess power, great power” in his speech calling to march on Washington (Randolph). Even in 1941 Randolph knew the influence his community and his voice had on society despite society’s neglect. The black influence in America is powerful and should yield benefits and credit but instead their power and influence is commodified.

Dr. Corey Barnes also discussed that words like “periodt”, “finna” and “lit” have all stemmed from the black community and have been taken over by Gen Z because they think it sounds cool. Although seemingly a complement to the African American community it actually is commodifying a culture that has been disrespected in history. In the past, words have been taken from the black community and were used to belittle them or oppress them. Additionally, our studies in the history of slavery showed us that fictive kin, the people black folk surrounded themselves with when their families were sold off in different directions, still has its presence in society today (229,White et. al). Ever heard people calling their friends or neighbors “Brother” or “Auntie”?  A brother became someone who shared their struggles, someone who supported you when black communities received no support from their society. In the wake of the cotton gin, fictive kin became a huge concept as families were ripped apart and children were being raised by any “Auntie” or “Uncle” they knew (227, White et. al). Nowadays all kinds of Americans like to use these endearing terms but in the days of Jim Crow white folks used it to belittle the black community. As the African American young ladies and gentleman walked the streets they “were expected to lower their gaze, take off their hat and move aside for white people calling them “Mr. or Mrs.” while whites would call them ‘auntie or boy/girl’”  (371, White et. al). V. Dozier brought to my attention to another endearing greeting that further shows the influence African Americans have had on the United States and beyond. Hand communications such as the “dap” have been used by African Americans since the Black power generation as an extension of raising a fist or showing solidarity together (Dozier). This is seen in Freedom on My Mind in chapter 6 in a picture of soldiers in the Cold War holding up fists and a sign that says “Black Power is number one” (602, White et. al). This dapping up is now used by all ethnicities without the credit given to the black community. This trendy greeting was formed as a symbol against police brutaltiy and discrimination and yet it is used by those who have never lived or even learned about this black experience.

Dr. Corey Barnes explained the impact of the Ring Shout and Call and Response rituals done by black communites in the time of slavery and how it still has a presence in todays society. Ring Shout was a counter clockwise shuffle movement that used drums and singing and stomping that originated in West and Central Africa (Barnes). In America, during the time of slavery, they stripped black peopple of their drums so they stomped. They took away their right to be loud and gather so they met in the middle of the night. The stomping became a symbol of resilience and way to express themselves while the enslavers had gone to bed. The Ring Shout unified the enslaved people despite their different home regions and today this is called the “Holy Ghost dance” as it has been incorporated into the black churches (Barnes). We also see the Ring Shout movements in the form of ballet and hip hop and Jazz. Have you ever been to a school dance and seen or participated in a dance circle? Black culture is responsible for this fun, interactive and expressive ritual. Call and Response also has a great influence on today’s society. Starting with an expression or question being called, the other participants answer it by singing or shouting back. We have seen Call and Response on slave ships, cotton fields, cheer leaders and back up singers. During his presentation, Dr. Corey Barnes played a Rosie and Levee Camp Holler and I immediately recognized this famous Call and Response. There is a popular song by David Guetta called “Hey Mama” and the beginning features the Rosie and Levee Camp Holler. While listening I remember feeling uplifted which is the exact point to the chant. This Call and Response was used to uplift black folks in the Mississippi State Penitentiary as they were forced into labor. (Barnes). As I did more research into the popular song I noticed the only articles I found criticized it, David Guetta never made a statement giving credit. The sample of the Call and Response in the beginning was taken from imprisoned African Americans who used it to uplift each other and David Guetta is using in his “deliciously dumb banger with massive radio appeal…the repetitive lyrics, and the sex-laden innuendos… bubbling to the surface, there is a disgusting underbelly that lies deep within, trying to go unnoticed.” (Crepeault). While David Guetta had the chance to enlighten the world about where his “catchy” rhythm came from he instead commodified this black created rhythm to get fame and money. Call and Response is an empowering tool used by cheerleaders to get the crowd excited, military men to organize and for pedagogy. David Guetta used it to make money without crediting the community that created it amidst their oppression.

This Call and Response idea was not only brought up by Barnes and also by Dozier’s example of Twitter threads. Black women’s use of the twitter threads stereotyped them as “angry black woman ranting” but is a huge part of Twitter’s success that creators of Twitter never gave credit to. These Twitter threads are a type Call and Response, someone creates and posts and then others comment and invoke a conversation. Additionally, Tik Tok and Instagram have the same Call and Response idea but people are actually making money based on how many responses they receive on their calls. I think one of the most profound things Dozier had to say about her talk on community in digital spaces being erased was that black women are as self sustaining, researched and used as the rainforest. Because people want their rhythm but not their blues. Kylie Jenner wants their nails but not the struggles especially in the face of Astroworld (Dozier). These powerful statements indicated to me exactly what it means for the black presences to be commodified. The black presence is every and it influences so much of everyone’s life and yet there is no credit being given. Black women on Twitter are sticking up for their credit but it goes way deeper than Twitter.

The Black Present and Presence presentations enlightened my mind to the influence the black community has rooted in our society and how little credit is given to all the popular culture things we enjoy because they created it. The satisfaction I receive from getting comments on my Instagram post parallels on a grander level the uplifting emotions tied to Call and Response songs in the Mississippi State Penitentiary. I benefit from the empowering culture created by the enslaved and disenfranchised and not enough people recognize this. Hopefully, as time goes on more people can become educated in the black influence in society. Hopefully, black women on Twitter won’t always have to call people out for not crediting their community. I am grateful for the opportunity I have received to learn and appreciate all the things in my life influenced by the African American presence.

Randolph A. Phillip, “The Call to Negro to March on Washington (1941)”, Brotherhood of the Sleeping Car Porters.